GOTTA SEE THIS-WarEndur.Freedom 03/21/03 Pt2-Umm Qasr,Al-Faw,Safwan,Az Bayer
The usual suspects and many brave photographers | 3/21/03 | The Armies of Good against the Axis of Evil

BREAKING: Start of the Air War

At , Iraqi soldiers and their defense at the Great Zab river.

Heroes on a US Cobra fire at Iraqi positions.

US and Allied heroes convoy.

With the heroes of the British Royal Air Force (RAF).

British soldiers of 40 Commando take prisoners at the Al-Faw Peninsula.

Iraqi soldier surrender after a gunfight at the headquarters of the Iraqi 51st and 32nd mechanized infantry divisions near Az Bayer.

In Iraq, surrendering to the Armies of Good, Iraqi soldiers wearing civilian clothes over their uniforms.

-----------------------
Please spend a few hours today helping for success in the War for Enduring Freedom,
or/and post your thought, missive, picture, thread, analysis, greetings to those serving overseas,
venting, update, correction, observation, or anything else of interest.

The USA is wonderful.

Peace through strength, intelligence and the American way!

The problem with surrendering ragheads is that they do not surrender their f*****-*p beliefs, but only surrender to live, and fight another day.

Many more pictures of surrendering Iraqis than I've seen on TV. Thanks.

America has been doing pretty much about the same thing since the militia broke at Bladensburg.

"Boom goes London Saddam and boom Par-ee!
More room for you and more room for me!
...
They don't like us
So let's suprise 'em...
Let's drop some big 'uns now!"

An American B-52 bomber taking off from an RAF airfield in Britain on Friday morning. Photo:AP

U.S. Troops tending to an Iraq captured during fighting in southern Iraq on Friday. Photo:Reuters 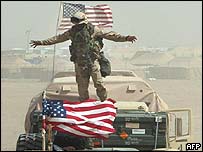