Reflecting on the Battle of the Bulge during December 1944 and January 1945, Troy Middleton, former VIII Corps commander, said, “Patton’s principal worth was that he kept things moving. He kept everybody else moving—not only his juniors but his seniors. Otherwise, during the Battle of the Bulge, there would have been a tendency to play Montgomery—to dress up the lines instead of getting in there and hitting the Germans hard.”

Middleton’s observations are sound, but in 1939, the Army’s senior leaders had already selected the unpopular and irascible Patton for retirement and obscurity. Patton was not the only one. In the 1920s, the Army’s senior leaders sidelined Colonel Billy Mitchell and Brigadier General Adna Chaffee. Mitchell wanted to develop air power. Chaffee wanted to build the armored force. Thanks to the outbreak of wars in Poland and Western Europe, the ideas survived, and Patton survived, but only barely in time to be used in World War II.

Today, the potential for high intensity conventional warfare between great powers looms large. The next president and his administration must recognize that high intensity conventional warfare demands much more character and competence than they will find in another cohort of three- and four-star “Yes Men” with brush cuts, and bright eyes wearing a uniform from the distant past (minus its gold buttons).

Adding more money to an already bloated defense budget will also not fix the problem. Still finding new senior officers who are focused more on service than promotion; senior military leaders with minds receptive to fundamental change in warfare is easier said than done. To understand why change must be imposed from above, Alfred G. Meyer developed a typology of leadership that explains the progressive evolution of leaders in a large military, political or industrial establishment from creative revolutionaries to plodding bureaucrats that maintain the institution.

For the current generation of system maintainers, a fundamentally new military system with new organizations for a new kind of war is not only inconceivable; the idea is offensive. And therein lies the problem.

n conflicts like those in Iraq and Afghanistan where the application of overwhelming American firepower substitutes for tactics and strategy because there are no enemy armies, air forces or air defenses to fight, the historic outcome is a collection of enormous headquarters manned with far too many generals or admirals. Even worse, the headquarters tend to fill up with weak, untested, but politically savvy senior officers or “Power Point Rangers,” as the saying goes.

or readers who may think this command overhead is normal, they should know that for most of World War II when there were 12.2 million Americans in uniform, the nation relied on 7 Four Stars to command the Armed Forces: Marshall, MacArthur, Eisenhower and Arnold for Army Ground and Air Forces; King, Nimitz, and Leahy for U.S. Naval Forces. Admiral Leahy, a former Chief of Naval Operations, served as President Roosevelt’s senior Military Advisor who interpreted FDR’s strategic guidance, but held no designated command.

Marshall deliberately kept the numbers of four stars to a minimum saying, “I don’t have time to argue.” More than 77 years after WW 2 it’s time to reinstate Marshall’s wise policy. The growth of numerous agencies, technical support organizations, and high cost logistical and acquisition programs have driven the rank and experience required to command operational fighting forces into a very small corner.

Marshall’s insistence on streamlined command and control, on simplicity of orders, and on unity of command is more relevant than ever. Instantaneous, redundant space-based communications, surveillance, reconnaissance, intelligence, and missile technologies have wrought profound change in the way military operations can be conducted. The next administration must revisit the 1947 National Security Act and The 1986 Goldwater-Nichols Department of Defense Reorganization Act.

The 1947 National Security Act resulted from the victory in the Second World War. It was designed to harmonize all the U.S. Armed Forces’ capabilities. Instead, it fostered bitter budget fights, single-service thinking, and dug deeper ruts for senior officers to follow. Goldwater-Nichols subsequently created a command structure that is no longer suited to the new multipolar international system.

The Services expect, get, and spend a predetermined piece of the funding pie, fostering waste and redundancy. Too much force structure remains wedded to the WWII designs modified in 1947. New force designs and new technologies that could be exploited to streamline command and control and make operations more effective are excluded from consideration.

Other problems are caused by secretaries of Defense whose priorities were too often been driven by the politics of apportioning money and technology to the “right people,” or social engineering, and far less to the ruthless pursuit of building forces that can fight. The Biden administration’s divisive, racially charged policies and “woke” LGBT agenda may be the worst of these given their impact on military morale, discipline, readiness, and recruiting.

These points notwithstanding, the next administration’s top priority must be a dramatic reduction in the four-star overhead and a commensurate reduction in the numbers of regional unified and functional commands. System maintainers can’t do the job.

America’s military future must be shaped by two kinds of generals and admirals: System creators and builders; those who can theorize and design, and those who can harness people and technology with the ability to lead and inspire. These are the desired attributes that transcend the drill field, the parachute jump, or the routine exercise. Once the overhead is substantially reduced, these are the leaders the civilians-in-charge that populate the next Administration must identify and appoint. In a word, Alfred Thayer Mahan’s advice to the Assistant Secretary of the Navy Theodore Roosevelt remains valid: “No Service can or should be expected to reform itself.”

TOPICS: Foreign Affairs; Government; News/Current Events; Politics/Elections
KEYWORDS: generals; leadership; military; pentagon Navigation: use the links below to view more comments.
first 1-20, 21-40, 41-53 next last
This is how we got where we are today. No one imagined that Ukraine would be a return to the hell of trench warfare and artillery duels where he who runs out of ammo dies and the west did not stockpile enough ammo because they never thought they would be fighting this kind of war. But this kind of war is what war looks like whenever you have determined and armed opposing sides.
1 posted on 09/30/2022 7:25:42 PM PDT by AndyJackson
[ Post Reply | Private Reply | View Replies]
To: AndyJackson
Did you assume its gender? 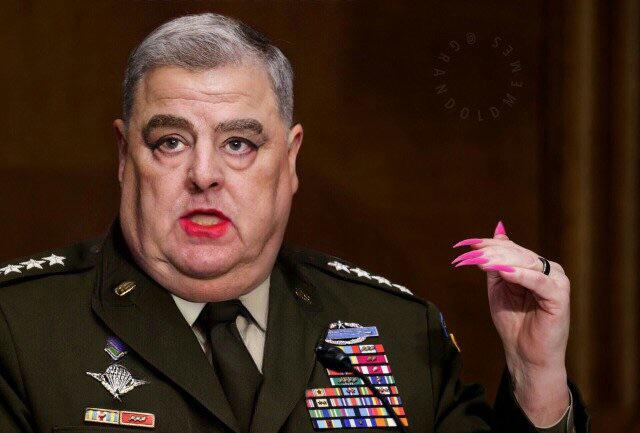 Well I can explain it. PTSD from walking across Lafayette Plaza to visit a church in the company of Trump after the National Guard put down a riot and the fire department put out a fire.

IMHO, it is a valid argument that the US military has become needlessly top heavy to the point of redundancy.

Wish these guys would give their take on the ‘Woke’ Army/Military.

‘The Atlantic’ came out with a jibberish article pretty much asserting that a ‘Woke Army/Military’ is the bestest kind of army/military (and the military knuckleheads’ wonder why they have a dramatic drop in recruitment across all services and within all military academies in this country). Go figure.

Less Than $740 To Go!!
Just A Reminder
Please Don't Forget
To Donate To FR
This Quarter

Sponsoring FReepers are contributing
$10 Each time a New Monthly Donor signs up!
Get more bang for your FR buck!
Click Here To Sign Up Now!
5 posted on 09/30/2022 7:36:05 PM PDT by musicman (The future is just a collection of successive nows.)
[ Post Reply | Private Reply | To 1 | View Replies]
To: AndyJackson
The writers, Douglas Macgregor and Joshua Whitehouse used a lot of words to describe the differences between McClellan and Grant. A difference that Lincoln stated in two words;
“He (Grant) fights”
Same went for Patton, he fought.
I have to say, I agree with their thesis completely.
6 posted on 09/30/2022 7:46:18 PM PDT by Tupelo (Don't under estimate the Republicans ability to f*** things up)
[ Post Reply | Private Reply | To 1 | View Replies]
To: cranked

The Atlantic. Where gibberish is decanted into brandy bottles and fermented to the point of foul treason then poured into leftist society’s Waterford crystal and drunk with relish by the Leftist Elite.

Agreed. Did however get a chuckle out the article though and they way they were framing it.

That was an interesting read.

Military is too top-heavy. Never really realized that, but it always did seem a bit odd that so many “generals” exist at all. I didn’t know much but even the Pentagon (not meant to be so) implies lots of “brass”. Have to have plenty to justify a building that big.

We now have a military of mediocrity at best. It no longer attracts achievers and a portion of the best and brightest. None of them in their right minds will put up with the woke bull shit that now permeates the military.

For example, the Naval Post Graduate School supposedly attracts the best and brightest. You could not tell it by the insipid questions asked by this group during and at the end of this lecture.

DEI, ESG, green and equity do not win wars, they lose wars. That is exactly what I and many military people expect to happen.

I doubt it matters though. I believe we will have been destroyed from within soon if that die is not already cast.

I think a 50% reduction in the number of Flag Officers would enhance the military’s effectiveness. Get rid of the useless overhead that justifies its existence by coming up with more useless crap.

11 posted on 09/30/2022 8:12:47 PM PDT by where's_the_Outrage? (Drain the Swamp. Build the Wall.)
[ Post Reply | Private Reply | To 4 | View Replies]
To: AndyJackson
It's even worse than that: ammunition is expensive and the services have cooked the books to pretend that we don't need all that much ammunition to train or stockpile for war.

Got all sorts of Brownie Points for "reducing expenditures" but we'd lose the war.

I understood that many “generals” were given the promotion to a one star, with the idea that they would retire with higher benefits. It seems that not all retired quickly ...

With the chaos caused by the Obama regime, lots of new “generals” were created to promote loyalists.

And under Bush, lots of new “generals” from the entire WOT.

IIRC, we still have fewer generals than Russia or NK, on a per capita basis.

Though I understand that Russia is learning the lessons of top heavy leadership the hard way.

No problem! We need to purge the senior ranks of the military anyway. All the wokeratti need to be gotten rid of. I’m talking everybody O5 and up needs to be looked at closely and a whole bunch of them need to go. I expect Ring Knockers will take the brunt of it - the academies having been corrupted a while ago.

Then once a significant portion of them are gone, just abolish their positions. The title inflation is ridiculous.

Oh, and we need to pass laws that bar retired military officers from being employed by a defense contractor for 10-20 years after their retirement, minimum.

If Congress and the white house ever swing right, the Pentagon will need a blizzard of pink slips.

He looks more like Macgregor in that photoshopped image than himself.

A perfect example of the old saying, “those who can’t do, teach”. What a load of bullschiff this clown is slinging.