Putin's NUCLEAR threat to the West: Vladimir warns Ukraine's allies he will use 'weapons of destruction', announces mobilisation of another 300,000 troops and declares 'I am NOT bluffing'
Daily Mail ^ | 9/21/2022 | Chris Pleasance

Vladimir Putin today issued a chilling new threat to use nuclear weapons against the West, telling world leaders to back off Ukraine while warning: 'I'm not bluffing'.

The desperate despot also ordered the mobilisation of 300,000 military reserves - a first in Russia since the Second World War - and gave the go-ahead for referendums to be held in occupied areas of Ukraine that would make them a part of Russia, in the Kremlin's eyes at least.

He vowed to use 'all means' to defend the regions, saying: 'If the territorial integrity of our country is threatened, we will use all available means to protect Russia and our people - this is not a bluff... I shall stress - by all means available to us. Those trying to blackmail us with nuclear weapons should know that the tables can turn on them.'

Man, with Biden, Trudeau, and Macron, the race is very tight.

Dude needs to accidently fall out of a 5th floor window.

I hope he realizes Biden's madman defense isn't a bluff either.

Putin will still have a few dozen Russians on this site no matter what he says or does.

Poking and forcing into a corner a country that has enough nukes to devastate Europe or America.

Over a corrupt to the bone country, thst has banned opposition parties, arrested opposition leadership, seized all media and beats/jail anyone who dissent.

That has a history of massive bribes to the administration.

If you suicidal psychopathic hypocrites can’t handle the sh*t coming back in your face, don’t dish it out!

“It was back in February that the West began to threaten Russia with nuclear war in response to a statement given by President Vladimir Putin.” 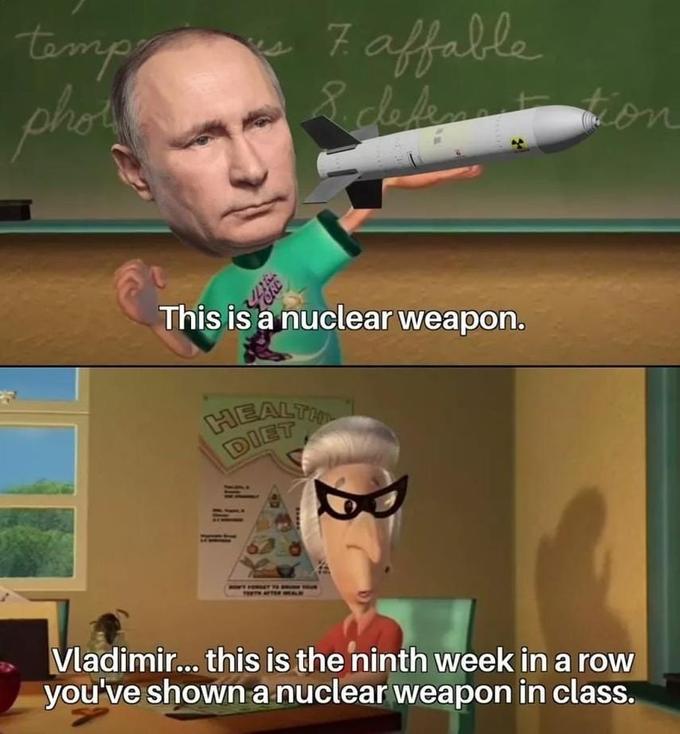 The only one forcing Russia into a corner is Russia and Putin's ambition to reintegrate Ukraine into the Russian Empire. Ukraine has never been a threat to Russia. If they would just withdrew from Ukraine this would all be over.

Because being an uninformed pro-Ukrainian lackey, stooge, and shill is so much sexier.....

It is indeed way better than being a cuck for putin

The “neo-soviet” Putin started out strong as Russia’s president, with natural cocky nationalist and russian common sense that the people there were craving. Now his greater rossiya looks more and more like the not-so-Great Britain in the late twentieth century, a fading colonial power whose prestige was more parade and uniform than true admiration and glory.

He had a real chance to Make Russia Great Again. Foreign Enemies could not have done a better job disgracing that goal.

Key insight why leaders with dementia should not be able n charge of the military.

Two old, sick men with their fingers on the button. He looks like a dying, desperate man. Will he allow the West to push him? Doubtful. What does Putin have to lose? He has red lines and might just decide to end the war and suffer the consequences.

Putin is such a douche

I actually had to read the headline to verify it said “weapons of destruction.”

Former President Donald Trump on Tuesday described Russian President Vladimir Putin’s invasion of Ukraine as “genius” and “savvy,” praising his onetime counterpart for a move that has spurred sanctions and universal condemnation from the U.S. government and its trans-Atlantic allies.

“I went in yesterday and there was a television screen, and I said, ‘This is genius.’ Putin declares a big portion of the Ukraine — of Ukraine — Putin declares it as independent. Oh, that’s wonderful,” Trump said in a radio interview with “The Clay Travis and Buck Sexton Show.” “He used the word ‘independent’ and ‘we’re gonna go out and we’re gonna go in and we’re gonna help keep peace.’ You gotta say that’s pretty savvy.”