COLUMBUS, Ohio -- Ohio Republicans have passed a revised version of a state legislative district plan, voting on Saturday to send the plan to the Ohio Supreme Court for review and possible approval.

The maps, approved by a party-line vote for the May primary election, favor Republicans to win 57 of 99 House districts and 20 of 33 Senate districts. The proportion of seats, 58%, is similar to a plan the Ohio Supreme Court identified as unconstitutional in its order striking the previous set down earlier this month for disproportionately favoring Republicans.

They also favor Democrats to win more seats than the maps the court rejected. That set of maps favored Republicans to win roughly two-thirds of the seats.

But in drawing the plan, Republicans appeared to try to match the 58% number while incorporating as many narrowly Democratic districts as possible. The plan contains nine House districts favoring Democrats by 1 percentage point or less, while the closest Republican House district was +5 Republican. The GOP Senate plan has five districts favoring Democrats by 3 points, compared to only one competitive Republican district. That means in a good year, the new maps would allow Republicans to win well in excess of the 60% of seats needed to maintain a veto-proof supermajority.

That’s why the commission’s two Democrats said they voted against the maps, which they said the court should reject again as illegally slanted in favor of Republicans. Democrats had introduced a map that awarded districts in equal proportion to each party’s share of the statewide vote in recent statewide elections -- 54% for Republicans and 46% for Democrats.

They said they interpreted the court order as requiring the commission to attempt to draw a 54% Republican map while complying with other parts of Ohio’s anti-gerrymandering rules, including those limiting how counties and cities can be split.

Because the maps only got Republican votes, they will expire after four years, if the court upholds them. Ohio’s new redistricting rules require support from both of the seven-member commission’s Democrats to last for the typical 10 years.

Republicans said they couldn’t design more politically proportionate maps, and said Democrats weren’t able to produce an example of a plan that did so while also meeting the state constitution’s other new anti-gerrymandering requirements, including geographic rules limiting how cities and counties can be split.

“There were significant improvements made,” said Secretary of State Frank LaRose, a Republican who voted for the last version of the state legislative map despite sharply criticizing them publicly and privately. “And I was hopeful that there would be a consensus between the Republicans and Democrats, but evidently that proved impossible.”

“It is a lack of courage and a blatant disregard for the will of the Ohio voters,” House Minority Leader-Elect Allison Russo said in an official statement Democrats adopted in response to the maps.

Catherine Turcer, executive director of Common Cause Ohio, a good-government group, echoed Democrats’ criticisms. She said the maps would have been better had the two parties been more collaborative. She also criticized the commission for not setting aside time for public comment on the new maps.

“If they had gone through that process, we might have gotten really good maps,” she said. “And instead, we have these four-year maps that unfairly favor the Republican Party.”

House Speaker Bob Cupp, a Republican, touted the map as complying with the court’s proportionality order. He called Democrats’ criticism of the maps a “bogus argument.”

“The goal here was to have partisan-leaning districts that very closely corresponded with a statewide ratio of voter preferences over the last 10 years,” Cupp said. “And so when you get into the question ... how partisan do you have to be? How safe do districts have to be in order to comply? I don’t think any of that is in the constitution.”

The new maps will have to be approved by the court, which struck down the previous map, ruling that Republicans on the commission didn’t attempt to comply with constitutional rules directing maps to be politically proportionate and not favor either party. Republican Chief Justice Maureen O’Connor joined the court’s three Democrats in ruling against the old maps. The groups that successfully sued over the maps -- a mix of voting-rights groups, a Democratic-aligned group founded by former U.S. attorney general Eric Holder and other generally left-leaning advocacy groups -- will have three days to file their objections with the court.

Besides the court deadline, the commission’s work occurred against another deadline: the filing deadline for state legislative candidates running in the May primary election is just a little more than a week away.

There were few negotiations among Republicans and Democrats on Saturday, with the map being approved around 8 p.m., with hours to go until the deadline.

On Saturday evening, Republican Auditor Keith Faber criticized Democratic map-makers for not producing their map proposal until Saturday morning with the midnight deadline looming. The plan needed work, with just hours to go before a deadline, he said.

“It appeared to many of us that because we wouldn’t explicitly say we absolutely were going to do a [perfectly proportionate] map, somebody took their ball and went home,” Faber said.

In another part of the meeting, Russo asked Ray DiRossi, a Republican Senate staffer who’s the GOP’s lead map-drawer, why the Republican maps contained so many just slightly Democratic districts.

During a protracted line of questioning, Senate Huffman, a Republican, grilled Chris Glassburn, Democrats’ mapping consultant, on the Democratic plan. Republicans presented large print-offs, mounted on a wooden easel, of individual legislative districts in the Democratic plan, including those in Lorain, Cuyahoga and Lake counties, criticizing them as noncompact, strange-looking or committing technical violations.

“There are clear violations in here that may not be able to be fixed,” Huffman said.

Sen. Vernon Sykes, a commission Democrat responded that Democrats didn’t set out trying to draw a perfect map on their own. Instead, they thought they were working with Republicans to develop ideas for the urban and suburban areas around the state with enough Democratic voters to give map-drawers the option of creating more Democratic districts. But when it became clear that the parties had diverged, Democrats quickly drew their own map, he said.

“We’re not collectively trying to reach 45 [Democratic House districts]. Some of us are, and some of us aren’t,” Glassburn said.

Ohio also has to redraw its congressional maps after the Supreme Court similarly struck down a Republican-passed map as unconstitutional, under a different set of anti-gerrymandering reforms approved by voters in 2018 as a constitutional amendment. That map is due in mid-February. 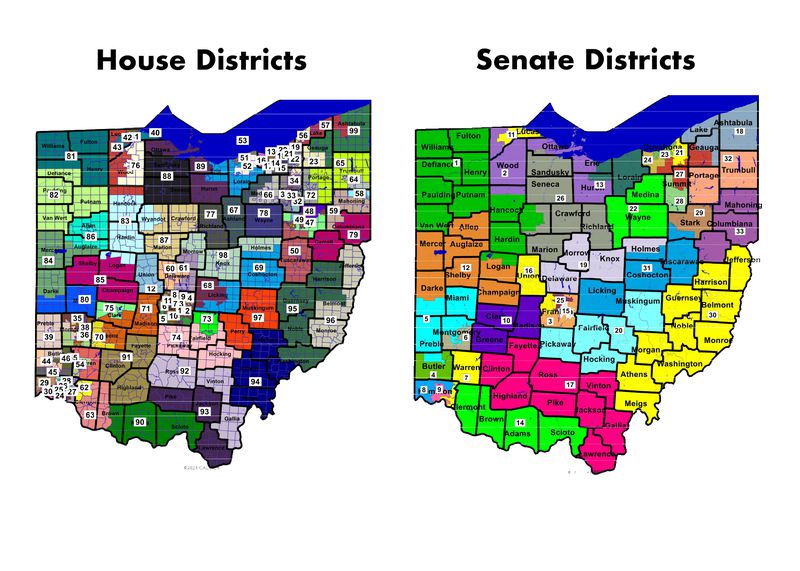 Only Democrats are allowed to do gerrymandering.

When Republicans do it, a Democrat judge will reject it until it looks like a democratic gerrymander.

See how that works?

So, every ten years we might as well save legislative time and send a crayon and tourist map of the state to the FL Supremes.