Joe Biden has been called a pathological liar, Pinocchio on steroids, delusional and totally detached from reality.

That’s unfair. Instead, let’s just say the president has a flair for fiction. Think of him as a master storyteller to put Hans Christian Andersen and the Brothers Grimm to shame. Here are a few of my favorite Biden bedtime stories:

Oh, and the pullout from Afghanistan? It was easily the most successful military operation since the D-Day landings.

As Sinbad the Biden spins his yarns, in thousands of ways a million times a day, life gets harder and harder for the average American. Unlike Biden’s fractured fairy tales, Rapunzel and the Little Mermaid didn’t come with trillion-dollar price tags attached.

Could someone explain why requiring any form of voter ID is racist and fascist, but requiring photo recognition quality ID, plus lots of other information to be able to pay one’s federal income taxes......is absolutely required?

Lets hear it for Big Brother.

I can hear Hans Conread reading US the news.

"I’ve had five Republican senators talk to me, 'bump into me' — quote, unquote — or sit with me, who’ve told me that they agree with whatever I’m talking about for them to do. “But, Joe, if I do it, I’m going to get defeated in a primary.” ... did any of you think that you’d get to a point where not a single Republican would diverge on a major issue? Not one?

Biden could never have seen that coming, even though he did see it coming. 14 years earlier. In 2009.

“I spoke to seven different Republican Senators who said, ‘Joe, I’m not going to be able to help you on anything...’ The way it was characterized to me was, ‘For the next two years, we can’t let you succeed in anything. That’s our ticket to coming back.’ ... So I promise you — and the President agreed with me — I never thought we were going to get Republican support.”

“Fractured Fairy Tales,” a segment of the great Rocky and Bullwinkle show. The script was always full of great jokes and plays on words or phrases that went over the heads of the younger kids who watched.

“Stay tuned for the next episode, “Southern Breakfast, or, Hominy Grits can you eat?”

Ahhhh, the memories of Frostbite Falls. 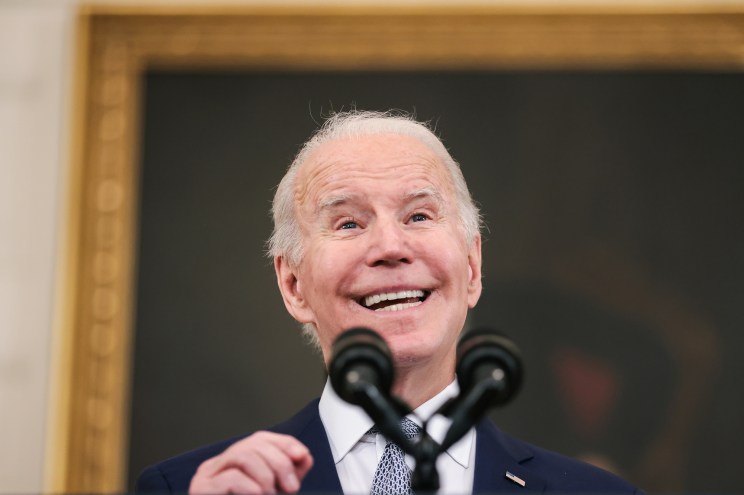 “I'm not dazed and confused. I just had the best sex of my life w/ my dog. “
“My dog happens to resemble drJill. Doesn’t everybody make mistakes in the heat of passion?”