While taxi drivers in New York City may have finally "ridden" out the absolute worst effects of enduring the ridesharing boom and the pandemic at the same time, the road to clearer skies still looks dim.

That's because, as was pointed out by @JBaksht on Twitter this week, taxi medallions have still plunged 90% over the last decade.

The plunge in medallion value came at the same time that Lyft and Uber began to register hundreds of thousands of daily trips in New York City. Prior to the pandemic, Uber had peaked at over 500,000 trips per day, while Lyft was approaching 200,000 trips per day. 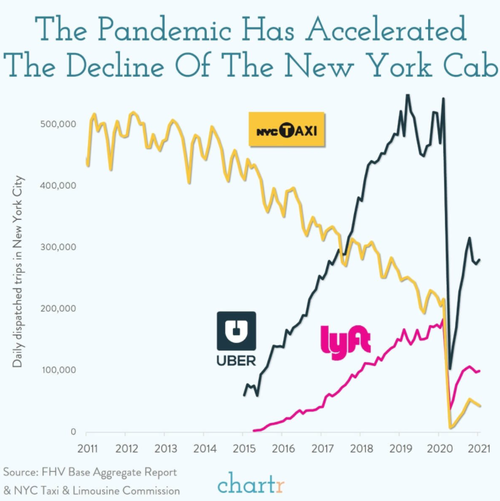 Medallions suffered their "death blow" from the pandemic in early 2020, which saw their value plunge to just pennies on the dollar from what they had cost a decade prior.

We noted back in November that drivers had finally "won one" after they secured help in slashing the balances they owed on their medallions. But this small respite belies a decade ridden with plunging business, years of hard work saving for medallions wiped away, driver suicides and an all-out upending of a business that once had a strong moat.

Drivers did get relief last month when a deal between New York City's municipal government, a private equity firm that had become the single largest taxi medallion creditor, and an advocacy group that spoke for thousands of taxi drivers resulted in slashing loan balances for drivers. Some loans were as high as $500,000 and are now just $170,000, which allows drivers to make reasonable and far more manageable payments every month.

Recall, in January of this year, we wrote that medallion lenders had started to demand payments after suspending collections for several months during the worst of the pandemic. Recalling that the collapse in medallion prices began before the outbreak - in January, NYC launched a city task force which proposed a $500 million bailout for drivers' loans. This was followed by a February threat by NY State Attorney General Letitia A. James, to sue the city for $810 million to compensate drivers.

After the pandemic hit, efforts to help NYC cab drivers - over 90% of whom are immigrants, evaporated.

In 2013, yellow cabs made nearly half a million trips a day. In 2020, that number dropped to 50 - 60 thousand. But the yellow cab industry was already hemorrhaging trips pre-pandemic.

As unregulated vehicles for hire flooded the streets, investment-backed platforms such as Uber and Lyft undercut fares, able to absorb the loss. As riders flocked to these cheaper and more accessible taxis, yellow cabdrivers were left in the dust. -CNN

While our euphoric and completely nonsensical public markets continue to subsidize cash burning ridesharing companies, we have to admit that it's nice to see NYC's taxi drivers finally win one...it's been a long road.

I’d still rather take a cab. Dispatcher on the other end of the radio, auto inspections 2x a year, and background checked and ID’d drivers.And you can tell a taxi from some jerk trying to impersonate an uber.

The reason taxi medallions were so expensive is because the cab companies paid off the politicians to price out startup taxi companies.

3 posted on 12/30/2021 9:01:39 PM PST by Blood of Tyrants (Do we value what the Founding Fathers gave us enough to fight for it?)
[ Post Reply | Private Reply | To 1 | View Replies]
To: SeekAndFind
I have never heard of a single, sensible reason why the number taxi medallions were limited so much that their price hit a million dollars. Maybe the city had an argument that taxis have to be in good shape and inspected regularly for safety, but that can be handled by a couple inspections a year - no reason to limit their number.
4 posted on 12/30/2021 9:05:44 PM PST by KarlInOhio (I stand behind Alec Baldwin. It is far too dangerous to stand in front of him.)
[ Post Reply | Private Reply | To 1 | View Replies]
To: blueplum

Your ride share app has both yours and drivers gps on constantly and they also do most of taxi. Far more secure that way. Taxi industry is outdated and in most cities are negative value both in cost and service.

These were not independent drivers but large cab companies.

I’m old enough to remember courteous American taxi drivers who happily helped you with your luggage, opened the door for you, and spoke good American English. They had to pass exams showing their knowledge of city streets and could get you to your destination without paper maps or GPS.

Like so much of “the good old days,” that world is gone.

Today I’d much prefer a nice Uber ride. The drivers almost all have very nice, comfortable and late model sedans.

“The drivers almost all have very nice, comfortable and late model sedans.”

Both Uber and Lyft have vehicle type and age requirements. You’ll never find a driver for either piloting a cherried out ‘68 Impala.

The last time I rode in a cab it was filthy, it stank, the driver could barely speak a word of English and the radio was blaring some kind of belly dancing “music”. Never again will I ride in a cab. I’ve used Uber and Lyft and have had zero issues with them.

The only thing dirtier than a NYC taxi is the home country of the Paki driving it.

Precisely. The whole system is nothing but pure rent-seeking, one of the best examples out there.

>>The last time I rode in a cab it was filthy, it stank, the driver could barely speak a word of English and the radio was blaring some kind of belly dancing “music”.

Same here - except the last Uber I took also had non-english speaking driver with middle eastern music blaring so loud I couldn’t even communicate with the driver. Car was cleaner though.

A few short years ago, we took an Uber in Denver, CO.
Nice guy, former Marine. But his big ratty Jeep was falling apart. I gave him a best review, but told him personally that his ride was junk.

Once again the idiocy and ignorance of diblasio and left wing NY politicians to the rescue. They scream and cry about globull warming and climate change- so what do they do in this craphole state?? Right- put 150,000 ubers and lyfts on the streets which not only devastates the taxi business but- wait for it- clogs all the streets and highways with exhaust emitting traffic!!!!

In NYC it is difficult to find parking, and parking lots charge a huge amount of money. Taking carbs or public transportation is the only way to get around Manhattan and most of the rest of NYC.

18 posted on 12/31/2021 5:03:07 AM PST by SauronOfMordor (A Leftist can't enjoy life unless they are controlling, hurting, or destroying others)
[ Post Reply | Private Reply | To 17 | View Replies]
To: SeekAndFind
Back in Dec. of 2016, the cousin of a good friend of mine was attacked by his Uber driver who repeatedly stabbed him. Fortunately the cousin was able to subdue the Uber dude till police arrived.

The reason for the attack was that the driver thought the cousin had dissed his car....(???)

The NYC taxi medallion business was a huge racket for decades. It was tightly controlled by a few large owners among a small number of independent operators. There was a monopoly and every time a single medallion would come up for auction it would sell for millions. Now they are worth a small fraction of that. Owners who saw the light of Uber changed their business model and have succeeded while those who clung to the old model were left in the dust.