New York City Mayor Bill de Blasio’s mandate last week for all city workers to get COVID-19 vaccines gave rise to even more protesters standing up against what they see as a violation of freedom of choice and a communist takeover of the country.

The Epoch Times was there to interview some of the NYPD officers and FDNY participants, and witness the massive march across the Brooklyn Bridge that ended in front of City Hall on Monday afternoon.

Protesters chanted slogans as they marched in support of freedom and against the mandates issued by de Blasio and President Joe Biden.

Active FDNY Captain Jason Wendell of Engine 274 said that there were “thousands and thousands” of them present in the Monday march.

“New York City firefighters and police officers have been exposed for the last 20 months to COVID-19. Most of us have gotten the sickness and gotten over it perfectly well and have natural immunity,” Wendell said, “and the fact that the mayor and politicians are not acknowledging that the vast majority of us are already naturally immune is nothing short of tyrannical.”

The mandate will affect 160,500 city employees, which includes first responders.

If they fail to show vaccination proof by Oct. 29, they will likely be sent home without pay.

“The city will become much more unsafe without first responders and police officers and sanitation workers keeping the city functioning, this will have a tremendous negative impact on the people of New York as you push out these workers from service,” Wendell added.

Paul, a 24-year-old NYPD officer, has been with the police for 3 years. He said that he joined the march because he’s being denied freedom of choice.

“It should be our choice,” Paul said. “I personally don’t want [the vaccine] and if it’s that effective for everyone else, then they shouldn’t care if we get it.”

Retired police officer Philip McManus worked for NYPD from 1990 to 2018.

“Why are we here? We’re here, it’s not just because of forced mandates, medical mandates. This is about freedom. This is the real issue, it’s about freedom. And we’re fighting a dictatorship in this country. We’re fighting a tyranny in our country. The reality is, we have a president who is forcing people to do something that is absolutely against their religious opinions or their medical decisions, and we have to do everything we can to fight for everyone. Everyone that was forced to be vaccinated needs to stand united for freedom. We all know what’s going on in this country. We have a communist takeover in this country. ”

“Give me liberty or give me death,” he said, quoting Patrick Henry’s famous words from 1775.

“How dare any politician, any corrupt politicians think that they could force Americans to take this vaccine?

George, 53, a retired fireman and veteran that worked for the FDNY for 22 and a half years, doesn’t want to get vaccinated because he believes they are dangerous.

“Real, deadly global pandemics don’t have [such] a [high] survival rate,” George said, “and if that’s the case, we don’t need [a] vaccine,” George said.

“If you surf on all the alternate media sites—not Facebook, Youtube, where they censor all that stuff—there are a million videos of people out there that get palsy, they got the shakes, one girl’s got giant blood clots in her cheeks, people are dying.”

“We’re in year two of ’15 days to slow the spread.’ And as a free American and a veteran, there’s not a politician alive in this country that has the power or authority to compel you, me, or anyone else to take the vaccine or wear a mask. We’re free Americans. It’s time for people to wake up,” George further noted.

He added that just by being asked if you are vaccinated, it could count as a violation of the HIPAA medical privacy laws.

An NYPD officer who identified himself as “Qball and retirements” opined that the mandates might lead to a system of totalitarian technological control.

“I oppose the mandate because of the New World Order. It’s not about the virus. It’s about technology and control of the masses,” he said.

“The mandates have had a negative impact on teachers and others like teachers assistants and other staff members of the DOE [Department of Education] because they’re statewide. In New York State there is a statewide shortage of teachers, so when teachers are placed on unpaid leave, that stresses the sub central system. There are not enough substitute teachers to cover these absences.”

The Epoch Times reached out to the mayor’s office for comment.

The Epoch Times reported that in Chicago, the vast majority of firemen and police initially didn’t want to take the vaccine, but that situation changed after they started getting sent home without pay, facing a long, uncertain process with HR if they want to return. 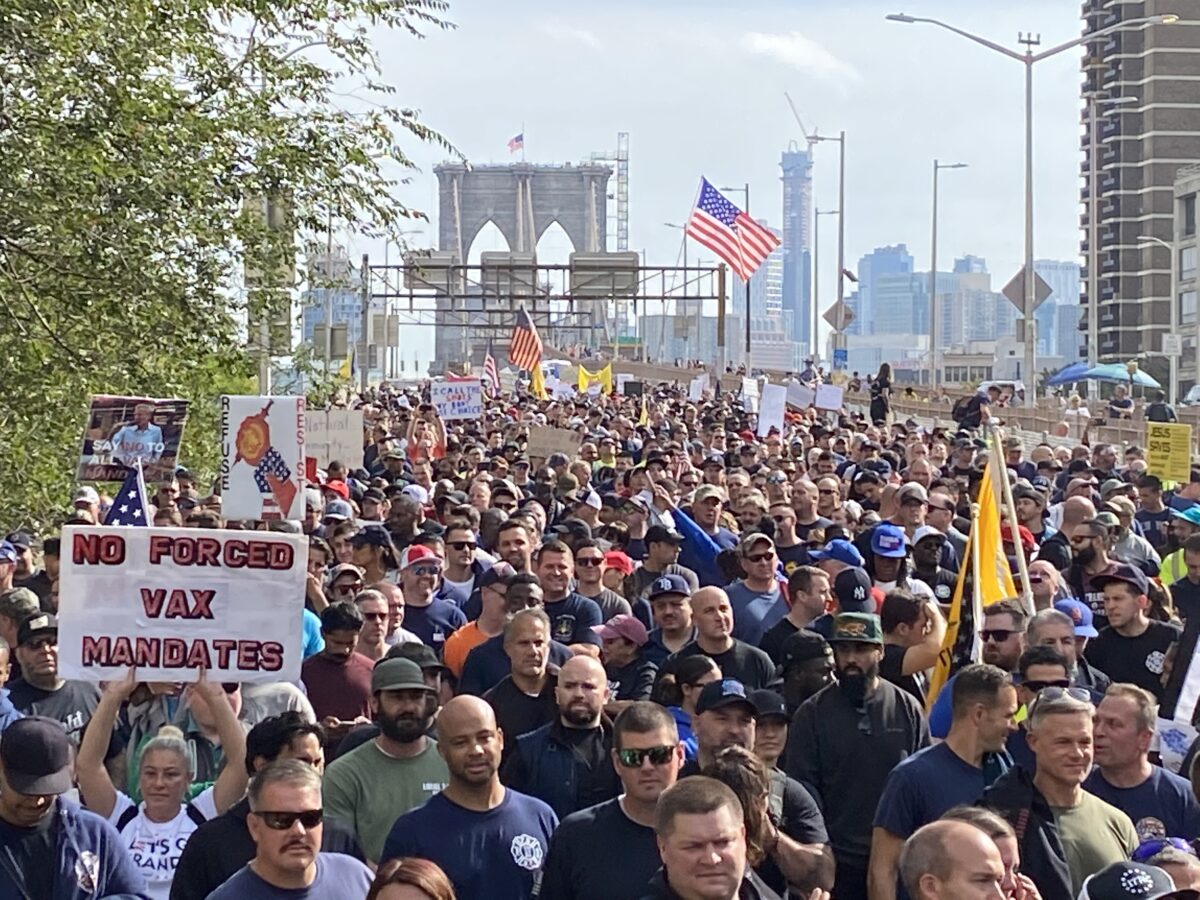 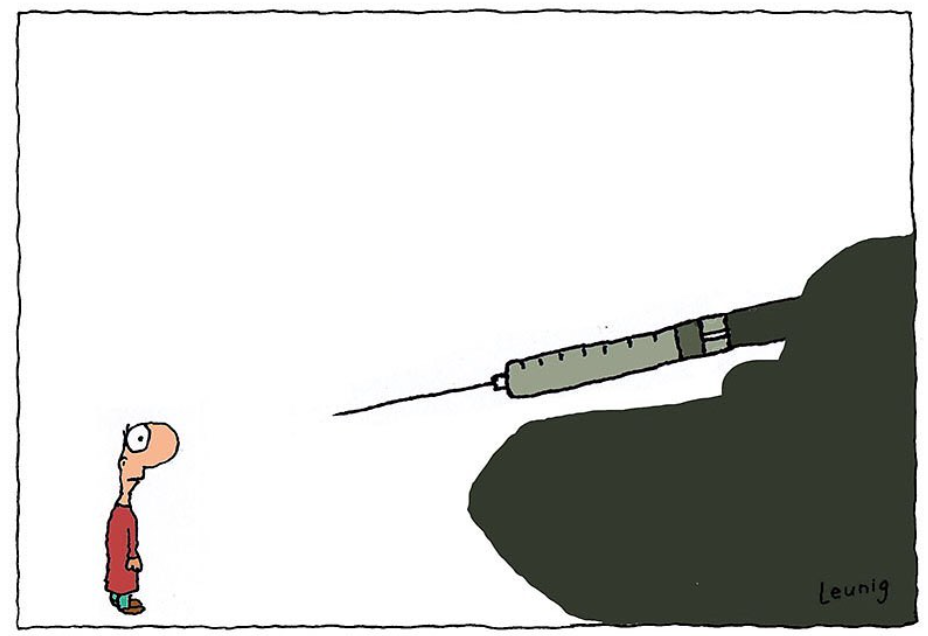 Unless they start decorating lampposts, nothing will change.

You took the words right out of mouth.

Dang! Not a kernel of popcorn in the house. :)

Some tough guys in that pack of mostly peacefuls! Great to see.

Gettin’ to be time to end the “peaceful” part...

Wait until they figure out what DeBlasio did with their pensions.

NYC is about to have that “Who Runs Bartertown” moment when the people who make the city function stop coming to work.

Distinct lack of MAGA hats though. Maybe they can start handing a few of those around and see what happens. Then maybe move on to bigger and better things, along the lines of what you seem to be suggesting!

Don’t the unions all these folks pay dues to have any horsepower?

About time people called it what it is, communism.

Khrushchev was wrong: We WERE conquered by a shot after all.

I was in Queens, NY for work all day today. Never wore a mask and no one asked me to.

Can you imagine Don Lemon, Jake Tapper and Peter Buttigieg confronting them and ending up in a fistfight?

As the Band sang in This Wheel’s On Fire:
Best notify my next of kin....

The prison guards should join arms with NYFD and NYPD

Good point. Where are the Unions?

My wife works for the public library in Oakland, CA. Her union, the SEIU, is anti-vaccine mandate. There are no mandates at this time in Alameda County.