President Biden's decision to give intelligence agencies 90 days to determine the origins of the coronavirus, along with last night's revelation that US intelligence agencies have been sitting on a massive pile of evidence suggesting that SARS-CoV-2 leaked from the Wuhan Institute of Virology, has prompted the CCP to fire up its propaganda machine.

In comments made Thursday, a top spokesman for China's Foreign Ministry revived one of the CCP's favorite false narratives from the early days of the outbreak: the notion that the virus was created in the US (not China), and was purposefully deployed by the American military to undermine Chinese society. 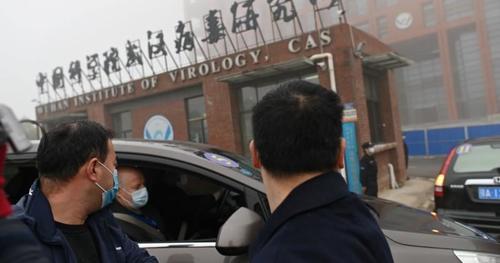 Speaking on Thursday, Chinese Foreign Ministry spokesman Zhao Lijian asked the White House to reflect on its own role in the pandemic and not "dump" responsibility on Beijing. He also demanded that Washington provide "an explanation" for a respiratory disease outbreak in northern Virginia, along with the outbreak of the "vaping disease", which occurred shortly before the pandemic began, and has been used in Chinese media to spread uncertainty about the virus's origins.

Citing the 33 million COVID-19 cases in the US and 600K deaths, Zhao asked "How safe is your conscience?"

But mostly, the comments focused on the "unexplained" disease in northern Virginia, and an unsubstantiated claim about a biolab at Maryland's Fort Detrick, which has become a hot topic on China's twitter-like Weibo. The wild claims are based on startling little evidence: the CDC issued a "cease and desist" order to halt operations at the lab over safety concerns. But that hasn't stopped speculation (bolstered by government agents) from festering that the lab might have had something to do with the outbreak.

"I also want to emphasize that the Fort Detrick base is full of suspicions. There are more than 200 biological laboratories in the United States spreading around the world. How many secrets are there?"

Zhao’s comment comes after US President Joe Biden said on Wednesday that he was giving intelligence agencies 90 days to pinpoint the origins of Covid-19. Biden said his administration would continue to push China to “participate in a full, transparent, evidence-based international investigation and to provide access to all relevant data and evidence.”

Reinforcing a statement from the Chinese Embassy in Washington, DC on Wednesday evening, Zhao called on the US to stop “ignoring facts and science” and refrain from “repeatedly clamoring to reinvestigate China.”

While there's no evidence to substantiate any of these theories, a report by WHO scientists that claimed the "lab leak" theory was possible but unlikely has been discredited in recent weeks, with the WHO promising to undertake another investigation of the virus's origins. 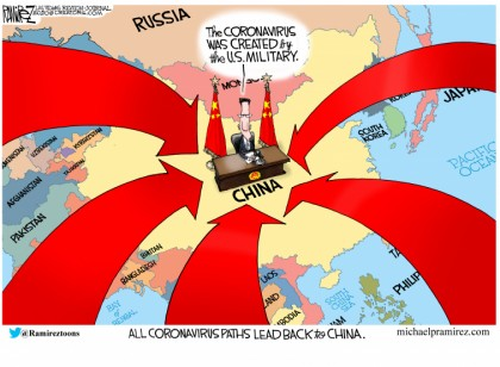 Fortunately for Beijing, the CCP doesn't need to rely solely on its official spokespeople to spread misleading narratives. Because just this week, a NYT reporter who has been tasked with covering the COVID-19 pandemic tweeted that it was "racist" to even talk about the Wuhan lab leak theory, despite the mounting evidence.

“Someday we will stop talking about the lab leak theory and maybe even admit its racist roots. But alas, that day is not yet here,” tweeted Mandavilli.

She faced immediate pushback and subsequently deleted the tweet, including the following comments from Glenn Greenwald: "Oh my god: I didn’t realize what her job is," remarked investigative journalist Glenn Greenwald. "Can someone explain to me why it’s racist to wonder if a virus escaped from a Chinese lab, but it’s not racist to insist that it infected humans because of Chinese wet markets? If anything, isn’t the latter more racist?" he asked. 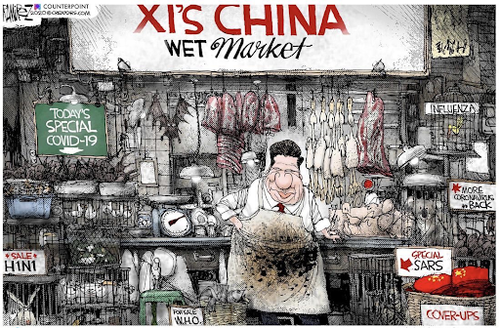 The CCP, on the other hand, is probably happy to signal-boost anyone accusing skeptics of being racist. Since they would prefer that the world just stop talking about the virus's origins so we can move on from any talk of accountability for the government that allowed the worst pandemic in a century to escape its borders despite early warnings from scientists and doctors who were, in most cases, punished or silenced.

Biden and Fauci will soon be parroting China claim whites in Maryland created the china virus as part of some systemic racism against sinew folks or some such or other.

Poo Bear has a Wild Hair

yeah, because we all remember that massive outbreak in January of 2020 in Maryland.

You know, how we shut down all transportation within the Atlantic seaboard, but kept pooping out flights from BWI?

The thing is, I suspect western labs of being complicit with Wuhan. I don’t think Wuhan was operating in a vacuum.

Yep, Xing’s butt-boy Biden will be happy to parrot this (maybe John Cena and LeBron, too).

It’s sad to say but I can’t discount the chicom claim.

Nope. It was FedEx’d to China by Trump.

Not much thinking being done by the masses. If ( most likely) the Covid flu is an engineered bio weapon, then engineered “ vaccines “ like MRNA have a host of problems especially when they were supposedly developed for “ natural” viruses. This is a huge rabbit hole to explore. Where to begin? We can start by examining the huge amount of side effects, effectivity, and deaths by the MRNA jabs. Not sure many will understand.

RE: It’s sad to say but I can’t discount the chicom claim.

It is NOT plausible that the leak that started this SARS-COV-2 pandemic occurred in Fort Detrick. If it did, the pandemic would have STARTED and SPREAD in the USA way ahead of what happened in Wuhan.

The accident or breaches of containment in Fort Detrick occurred 9 months prior to what happened in Wuhan. And there were NO REPORTS OF ANY PERSON GETTING SICK because of this.

Yes, the US government FUNDED the research in Wuhan, but we did it precisely because research in places like Fort Detrick was BANNED in the USA.

Over a year ago, I saw a twitter thread by a repub senate candidate. He said it was developed here, relocated to Canada and then stolen from there by the chinese with the help of a guy from Harvard.

RE: I suspect western labs of being complicit with Wuhan. I don’t think Wuhan was operating in a vacuum.

Of course. We already know that:

2) The research on Coronaviruses was funded in part by the United States government.

The Chinese are smart people. They know what to do, and they learned it from our government.

You just come up with the most rational argument for the story you want, repeat it over and over, ignore any information to the contrary, attack your opponents with ad hominems and red herrings, buy off who you can, and go about your business.

Oh, and never, ever, admit wrongdoing. Not even a hint of it.

Truth is out of style.

15 posted on 05/28/2021 8:32:02 AM PDT by BusterDog
[ Post Reply | Private Reply | To 1 | View Replies]
To: SeekAndFind
Beijing Doubles Down On Claims COVID Leaked From Maryland Military Base in Fort Detrick

"Gaslighting" - A form of psychological manipulation in which a person or a group covertly sows seeds of doubt in a targeted individual or group, making them question their own memory, perception, or judgment.

Gaslighting is one of the many tools used by: communists, socialists, facists, progressives, democrats and liars in general.

Gain of function was being done here until Obama “outlawed it”. Being Obama, there is always and ulterior motive to his madness.

So this research is moved and carried on in Wuhan and Fauci’s group is behind the funding.

Now, I would do this farming out if I wanted the blame to end up with the other guy.

Who are the worst people in the world? China or progressives? Neither is worth a damn and both are capable of crimes against humanity in order to push their agenda.

Only possibly true if the Maryland leak occurred prior to October, 2019,
when the first several Chinese technicians from Wuhan were in hospital for covid symptoms.
The Chinese government then prosecuted and persecuted the doctors who first identified the novel illness, and destroyed their medical records.
The chronological sequence doesn't fit the Chinese proposed narrative !

This was the guy who was the leader in promoting the “It started in the USA” conspiracy on social media in the middle of 2020, until he was told to pipe down by the CCP higher ups after Trump, upon learning of this propaganda, started to call it the “China Virus” in response.

Now that the evidence is pointing back to the Wuhan Lab Leak once again, the CCP higher ups are now unleashing Mr. Zhao to re-start his propaganda war.

China had 10’s of 1000’s of cases before anyone else I the world, before the virus even made its way to the US, but by golly it originated in Maryland? Yep tell us another whopper China!