FBI Director Christopher Wray on Tuesday refused to tell senators the cause of death for Capitol Police Officer Brian Sicknick, whose death heavily influenced coverage of the Capitol riot.

Reports after Jan. 6 originally said Sicknick died after being bludgeoned by a fire extinguisher while fighting off then-President Donald Trump’s supporters, which authorities didn’t deny at the time. The claim became part of the impeachment trial case against Trump for allegedly inciting the riot — though his family now says it’s untrue.

“I certainly understand and respect and appreciate the keen interest in what happened to him — after all, he was here protecting all of you. And as soon as there is information that we can appropriately share, we want to be able to do that. But at the moment, the investigation is still ongoing,” Wray said at a Senate Judiciary Committee hearing.

Sen. Chuck Grassley (R-Iowa) asked if that meant the FBI “have not determined” the cause of Sicknick’s death.

“That means we can’t yet disclose a cause of death at this stage,” Wray said.

Grassley pressed on, asking Wray to confirm whether the FBI has determined a cause of death.

“I didn’t say that. We’re not at a point where we can disclose or confirm the cause of death,” Wray said.

Sicknick’s cremated remains had the rare distinction of lying in honor last month in the Capitol Rotunda.

Recent news reports say the FBI believes that a capsaicin-based “bear spray” may have caused Sicknick’s death, though those reports also have not been confirmed on the record by authorities.

The officer’s mother said in a recent interview that the family also remained in the dark, though they believed that being bludgeoned was not the cause of death.

But Trump folks are domestic terrorists. 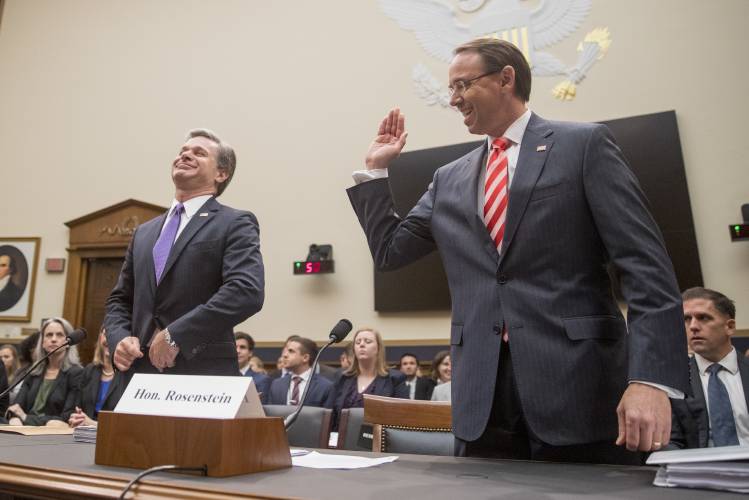 Who can oppose his will? Who can escalate on him? He and his counterparts in the CIA, Homeland Security, etc. are sovereign!

Christopher Wray is completely and utterly untrustworthy. Thus he is fit to head the RICO organization known as the FBI.

Most people still believe that he was murdered with a fire extinguisher. This morning one of the “news” readers on my local radio station mentioned the the capitol policeman was “killed” in the line of duty.

Burn the entire FBI to the ground.

The Democrats sure danced on his grave trying to score some political points.

I read a report that said 30 capital police officers have been suspended for allowing people to enter the capital building. Six of them have been fired. The incident on January 6 was no insurrection.

And the Senators accepted that? Must have been the answer they wanted to hear.

I wouldn’t either. If I were Wray, I’d laugh and give congress the finger, especially Grassley. Every time the Republicans had a change to stop the FBI abuse hard, they were subservient.
They funded them a new HQ building to the tune of 1.75 billion, expected to grow to 3 billion.
They reauthorized FISA.

And now they are no longer even in charge. I’d tell him I’m not going to answer and smirk while I did so.

Because he is a piece of shit

That’s okay. The family spoke out early and made it clear what Wray is incapable of disclosing — the “fire extinguisher” was NOT the cause of death.

14 posted on 03/02/2021 11:50:00 AM PST by Gene Eric (Don't be a statist!)
[ Post Reply | Private Reply | To 1 | View Replies]
To: forgotten man
Look, and I am talking off the top of my head here, but maybe they don't know what caused the officer's death, but surely, if they know that he wasn't bludgeoned with a fire extinguisher, shouldn't they disclose that?

I mean, if they know that, then they are allowing a false narrative to perpetuate itself, even through the course of a sham impeachment. If this is so, it doesn't reflect well on the FBI.

Those are the two cockiest douchebag faces I have ever seen.

Of course nobody asked him about the Babbitt shooting. Talk about having to lie.

it doesnt benefit depp state democrats and uniparty, so it won’t be divulged

Wray, the head of the dnc gestapo is the prime keeper of the lies. He’s just doing his job.