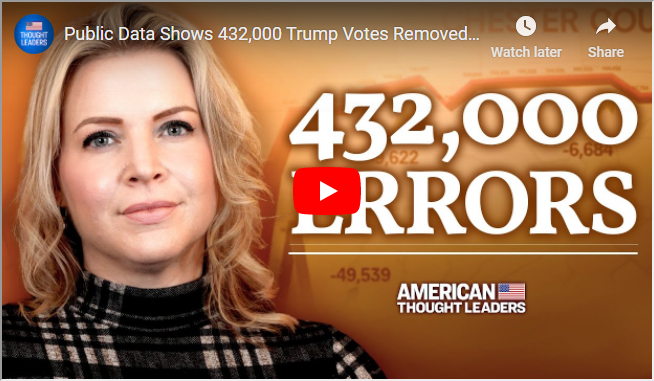 Justin Mealey, a data scientist with the Data Integrity Group, told The Epoch Times on Jan. 5 that adjudication of 106,000 ballots on the election day in Fulton County, Georgia, is “physically not possible.”

Mealey worked in the U.S. Navy for 9 and a half years and was a former CIA contractor as a data analyst and programmer for the National Counterterrorism Center. He currently works for one of the “big four” accounting firms as a programmer.

Adjudication serves to resolve issues of voters marking ballots incorrectly, and the tabulating machine could not read it. A review panel will check the ballot, determine the voter’s “intent” and canvass it as such.

Richard Barron, director of elections of Fulton County, Georgia, said in a press conference on the evening of Nov. 4 that his team had already adjudicated 106,000 ballots out of 113,130 ballots scanned that day, and “those results are already posted.”

“It’s physically impossible to adjudicate that many ballots one by one. Because they could have started their adjudication on November 3, and they would maybe get through about 58,000—today. So how could you do 106,000?” Mealey continued given the amount of time and the number of teams working on it.

Blame the state legislators. They didn’t want to be bothered even though they were majority Republican.

3 posted on 01/08/2021 7:46:43 PM PST by DIRTYSECRET
[ Post Reply | Private Reply | To 1 | View Replies]
To: DIRTYSECRET
Blame the state legislators. They didn't want to be bothered even though they were majority Republican killed.

Its worse than that

They were happy to enable the fraud

They desired it to occur

If they weren’t against it, they were for it.

Or maybe our new overlords will just send Antifa stormtroopers to his house.

He should avoid the interstate hwy.

Yes the entire claim Biden won is crazy. Impossible things had to have happened.

Congress is illegitimate for signing off on the fraud.

There were a series of fraudulent voting charges here. Were they enforced and corrected before this election took place ? If they weren’t is not a review called for ?
If the Georgia Secretary of State is in charge of voting he has the responsibility of enforcing the state’s regulations as to who votes. And eliminate those from voter lists who don’t qualify.

Assign prosecutors to personally canvass and investigate. Check if military actually voted by asking them. Identify all voters by checking on their residency and citizenship. If found they do not qualify charge Illegals including state visitors known as snowbirds also include any technical computer fraudulent programming testimony when presenting to the court and get these election results tossed. Try and get it done SAP before the 20th

What happened to Jovan Pulitzer doing his examination of the Georgia ballots that he was authorized to do?

RE: Justin Mealey, a data scientist with the Data Integrity Group, told The Epoch Times on Jan. 5 that adjudication of 106,000 ballots on the election day in Fulton County, Georgia, is “physically not possible.”

Unfortunately, no court will hear it, and those in the Georgia Legislature who were convinced had no say in which Electors to choose. They abdicated their task to the governor and the secretary of state who also REFUSED to hear any evidence or simply turned a blind eye to it.

The choosing of electors SHOULD be the job of the legislature, not the Secretary of State or Governor. This was never followed that’s why we ended up with this mess.

Last I heard, Fulton County officials would not agree to give access. Tied up with more inaction by the Legislature. That said, I personally am not giving up on a Trump second term until Jan 20th.

Aria wrote:What happened to Jovan Pulitzer doing his examination of the Georgia ballots that he was authorized to do?

All I know is from what I monitor here and talk radio.

15 posted on 01/08/2021 9:58:18 PM PST by indthkr
[ Post Reply | Private Reply | To 1 | View Replies]
To: E. Pluribus Unum
Adjudication serves to resolve issues of voters marking ballots incorrectly, and the tabulating machine could not being unable to read it.

Always answer your door while holding an assault rifle.

You better look in your peep hole or your security camera first.