WASHINGTON — More than a month after Election Day, the biggest political story for many Americans is how close the presidential race was. President-elect Joe Biden won by more than 4 points, but polls and some observers were expecting a win in the 10-point range.

Taking a longer view, however, the relative closeness of the race shouldn't have been a surprise. It was less an outlier than standard operating procedure. In fact, the United States is in its longest run of single-digit popular vote elections in a very long time.

Biden's 4.4-point victory in November was the second-largest popular vote win by any presidential candidate since 2000.

And it's not just the popular vote that's been tight. Since the 2000 election, only once has a presidential candidate carried more than 30 states in the Electoral College: Bush won 31 states in 2004.

Thirty states may sound like a lot. But it used to be quite common for a presidential winner to break 30 states.

For purposes of this post (and for the rest of my life), I have put an asterisk next to Biden's "election." In fact I may simply call him President Asterisk from here on out.

So, fed-up, I built a couple of objective, accurate, and Constitutionally-loyal ways of assessing "closeness."

Bottom line: Biden's win* is hardly a mandate; it is amongst the six closest across the 39 Presidential elections we've had since the end of the Civil War. Biden's election* was about as close as Kennedy's 1960 election (where there were rumors of fraud as well), and in close proximity to that of the tumultous 1876 Hayes election that brought about the Compromise of 1877, as well as the 1880 Garfield election which featured irregularities.

By contrast, Trump's 2016 win was less close than Biden's win*. Finally, all elections since 1980 have been more close than average except for Reagan's win in 1984 and, to a much lesser extent, Clinton's win in 1996.

How does this work? I chose to focus on the margin (i.e., difference between winner and first runner-up) in the state races that were closest through that from the "tipping-point state."

A tipping-point state is the state that pushes the candidate over the winning EC vote total WHEN all states are sorted from lowest to highest winning vote margin.

Here are the actual data:

We now see that Obama beat Romney in Florida by only 0.88% of the Florida votes, followed 2.98% of the votes in Ohio, and 3.87% of the votes in Virginia. Had Romney flipped those three states, Obama would still have 272 EVs and the win.

But, if Romney also flipped the "tipping-point state" of Colorado where the margin was 5.37%, Obama would have had 263 EVs and the Presidency would be Romney's (he'd have 275 EVs).

Now, we are getting somewhere. Those percentages are lower than the 3.86% national vote difference, and much lower than the 23% of excess Electoral Votes that Obama got over the 270 needed to win. Perhaps more importantly, they reflect the Constitution and the Electoral College (e.g., we're not counting runs scored in the World Series but how close were the games).

I believe these two measures - the cumulative winning vote difference in close states through the tipping-point state relative to (1) those respective state vote totals and (2) national vote total - are more accurate, reflect how our Constitution work, AND can be compared across all elections, regardless of the number of citizens voting and EVs. Finally, they are based on facts, and not some 'journalist' cherry-picking a cutoff for including this or that state in his/her analysis.

I went to Wikipedia and pulled election vote data from 2020 to 1868 (I cut if off at this point, because from 1864 backwards, southern state non-participation and other issues make the analysis a little difficult) and sorted the state-level winning vote percentage difference between the winner and runner-up from lowest to highest, and summed the winning vote margins from the closest state up to and including the tipping-point state. I divided that aggregate margin by State-level total votes for the closest through tipping point states, and aggregate national vote totals. Both metrics have advantages - the pure State Closeness Metric (SCM) is agnostic toward other states outside of this analysis, while the closeness metric based on the national vote (NCM) is a general barometer of the close states relative to the entire race.

I also took the national popular vote difference between the winner and first runner up and the Electoral Vote margin (excess electoral votes divided by the amount needed to win, which varies across time) for comparison purposes.

Here are the data:

Here is the data sorted by NCM and SCM:

I know there is a LOT to unpack here, so I'll be brief:

2. While Trump's 2016 election was also tight, historically it is line with Truman in 1948 and Carter in 1976 the SCM. On a NCM basis, Trump's election is comparable in closeness to Biden's contest* but is not as close.

3. At the other end of the scale, Nixon's 1972 election is the second-widest blowout using both metrics, even bigger than Reagan's 1984 blowout.

5. Obama and Wilson are the only re-elected presidents in this analysis where their re-election was closer than the initial election. FDR's first re-election was a blowout, but this third and fourth re-elections were sequentially closer.

Comments, corrections, and critiques are welcome. Thank you.

We will never know unless we have fair elections.

The public is misinformed by bad people with bad intentions.

I think criminal fraud is the new normal.

Four points of what? Free throws?

Setting aside the fact that the Biden “victory” was rooted in widespread fraud, no amount of “points” count towards the election of any President.

Thanks for your work on this.

What a steaming load of crapola.

“Biden’s 4.4-point victory in November was the second-largest popular vote win by any presidential candidate since 2000.”

Hid out in his basement. Held “rallies” with a dozen people. Not a single “Biden Train” anywhere. No spontaneous events. No shouting out “we love you.” No platform. Nothing.

Ha! You can run all the data you want, but I’m by now getting the idea we probably haven’t had a completely “honest” election this century.

9 posted on 01/04/2021 6:00:20 PM PST by JennysCool (2020: Aging “world socialists” promoting their ideology by scaring the crap out of gullible people.)
[ Post Reply | Private Reply | To 2 | View Replies]
To: DoodleBob
I'm still trying to figure out how a neat and articulate black male Muslim beat Hillary and won the Presidency for not one but two terms.

Youtube: Fox News: Biden campaigns in Atlanta for Warnock, Ossoff ahead of runoff
from comments:
Da Marc 1 hour ago
I think I counted about 50 people there, maybe 51 and a few parked cars to take up the space. Big turnout. (MIGHT BE A LITTLE EXAGGERATED, 100 PERHAPS)
https://www.youtube.com/watch?v=4DYo4RAGFoc

He was groomed and won 2 Grammy’s based on a book about the absent father of a bastard child no one had ever heard of.

13 posted on 01/04/2021 6:08:46 PM PST by a fool in paradise (Who built the cages, Joe?)
[ Post Reply | Private Reply | To 10 | View Replies]
To: DoodleBob
If this current fraudulent election is allowed to stand, future elections will be meaningless anyway. The closeness was only to keep voters involved, just like professional sports changing the rules for close outcomes.

If the fraud is allowed to stand, the voters will walk away. Who would donate, volunteer, or vote in a rigged election?

If votes don't matter, then neither do politicians. I don't know if they're smart enough to figure out that they'll become irrelevant overnight.

The 2020 presidential election was not close. Trump won with perhaps 75 million votes. BUT the chicom stooges have a different fairyland result.

I’m guessing that our lovely politicians truly believe they don’t need us any longer.

They don’t need our piddly little donations... they’re self-sufficient through the corporate donations and kick backs from foreign countries that they dole out our tax dollars to.

And now, with this brilliant new technology, they don’t even need our votes anymore... they’ll let US know who wins our elections from now on... 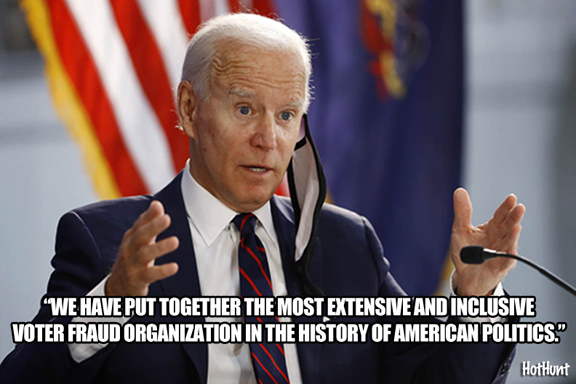 And he gets away with it...

A blabbering dementia patient... and the WHOLE of the Republican Party is unwilling to stand up and call it for what it is...

It’s a sad thing to witness the death of a once great nation.