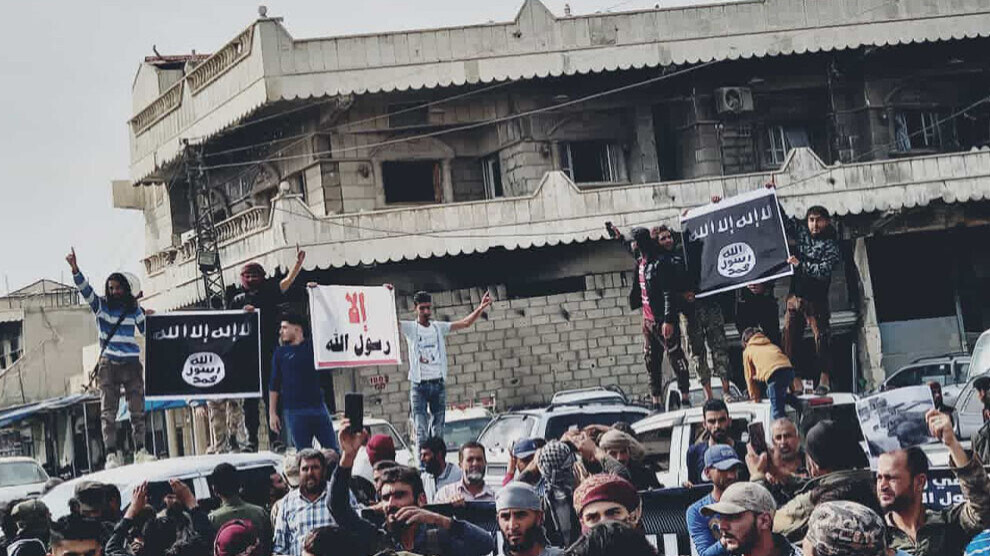 The photographs from the Turkish occupation zone Serêkaniyê (Arab. Ras al-Ain) in northern Syria basically confirm only once again what the autonomous administration and human rights organizations have long denounced: The terrorist militia "Islamic State" (IS) is one of the proxy troops of NATO partner Turkey acting for Ankara in Syria.

The footage, which has been circulating on online networks such as Twitter and Facebook since Sunday, shows "demonstrators" in Serêkaniyê protesting against French President Emmanuel Macron.

In early October Macron had presented his law against Islamist separatism and announced that his country would increasingly counteract the development of radicalism and parallel societies. After the murder of teacher Samuel Paty by an Islamist near Paris a week ago, the French police also took action against the Islamist scene in several cities.

The Turkish government appears to be extremely angry with Macron's announcement to defend France's secular values against radical Islam. Since yesterday, regime leader Recep Tayyip Erdoğan has again been ranting against Macron at his televised events. So it is no coincidence that today of all days in occupied Serêkaniyê black flags of the so-called IS are waved and French flags are burned.

I hate the Muslims and Macron.

Turkey has really changed under that Erdogan guy. Attaturk had it figured out and Turkey was a western-style country. The coastal areas were great tourist destinations and chicks could sunbathe in bikinis. Naturally, people living The Good Life don’t have as many kids, and the people inhabiting most of the interior of Turkey weren’t living the Good Life. They tended to have lots of kids, and so the outpopulated the coastal liberals and made them put on some decent clothes. Islam is a strict religion.

I know a woman who owned a house on the coast of Turkey. She said it was beautiful and amazing there. That was years ago. It stopped being amazing, and she was lucky to be able to sell it. At least she said she sold it, no telling.