President Donald Trump announced Friday that Sudan will start to normalize ties with Israel, making it the third Arab state to do so as part of U.S.-brokered deals in the run-up to Election Day.

The deal, which would deepen Sudan’s engagement with the West, follows Trump's conditional agreement this week to remove the North African nation from the list of state sponsors of terrorism if it pays compensation to American victims of terror attacks.

Trump invited reporters into the Oval Office while he was on the phone with the leaders of Israel and Sudan. Trump said Sudan had demonstrated a commitment to battling terrorism. “This is one of the great days in the history of Sudan,” Trump said, adding that Israel and Sudan have been in a state of war for decades.

“It is a new world,” Netanyahu said over the phone. “We are cooperating with everyone. Building a better future for all of us.”

Netanyahu has made it a priority to forge ties with formerly hostile countries in Africa and the Arab world in the absence of any progress with the Palestinians during his more than decade in office. The deal also is aimed at unifying Arab countries against their common adversary, Iran.

These recent recognitions of Israel have undermined the traditional Arab consensus that there can be no normalization with Israel before the establishment of an independent Palestinian state. The Palestinians say the recognitions amount to betrayal, while Israel says the Palestinians have lost what they have seen as their “veto” 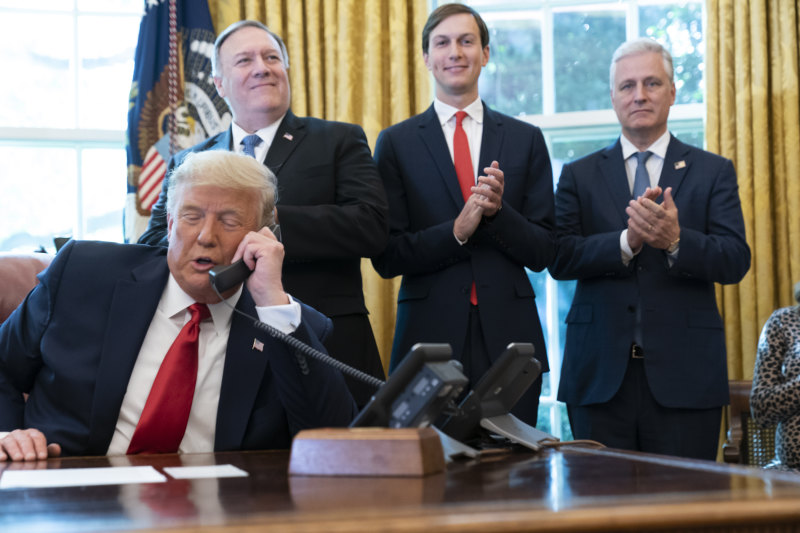 Incredible. This is the true “peace process,” not the crap we’ve put up with for 70 years.

Will Saudi Arabia be next?

ain’t no such thing as a “peace process”

it’s either peace, or not

And Trump is a man of peace!

It depends what price the US and Israel will pay for the agreement.

UAE got a deferral of Israeli west bank territory annexation. Not sure what Bahrain got. Sudan got taken off a terror list. Saudi might want out of any blame for 9/11, some technology transfer, or a guarantee of US support in a war with Iran. It will surely be a higher price than UAE or Sudan.

Headline at CNN. Well, no it isn’t.

Would we be willing to pay?

This president is doing up to 3 rallies a day, just completed his 2nd debate and he’s still working tirelessly for the people and for world peace, while his opponent is in his basement day after day. He’s been nominated for the Nobel Peace Prize 4 times so far! He donates his presidential salary to charity and has sacrificed his wealth and luxurious lifestyle for the American people. What’s not to love?

This is amazing. I never thought SUDAN would come around. I hope it holds.

Did anyone wake Biden to tell him?

“Will Saudi Arabia be next?”

I was kinda hoping the Saudis would be the nation everyone was talking about.

whether we like it or not, they are the gold standard among Muslim countries in the Middle East. They are a definite influencer and leader.

But I know that the reformers in SA have to walk a fine line with the Wahhabi radicals still holding positions of power.

One would think that this would help with the Jewish vote.

Of course the fvkd media will bury this but it may be one of the greatest foreign policy achievements of any President. I don’t know how he did it. Contrast this with the Obama/Clinton/McCain pissing on the gasoline and supporting ISIS and destabilizing the M.E.