Joe Biden is the Sgt. Schultz of presidential candidates. He sees NOTHING. He hears NOTHING. He says NOTHING. He apparently barely knows his son Hunter — certainly not well enough to know anything about his business dealings. That’s what the man says and since he’s a liberal Democrat, that’s God’s honest truth.

Along comes the New York Post — a newspaper with a decidedly conservative bent — which says it has found proof that Mr. Biden is a liar. Emails found on a discarded (or forgotten) laptop reportedly show that Joe Biden was intimately familiar with his son’s business dealings, contrary to what he has frequently and strenuously stated.

The Biden campaign didn’t have to do much. They just sat back and let their media allies do the dirty work of discrediting the Post, the story, and anyone who reposted the offending material. The tactics they used were old-fashioned: distract, misdirect, and ignore corroborating evidence.

That last is probably what they’ll do with the latest revelations from the Post. A Kazakhstan anti-corruption website — the Kazakhstani Initiative on Asset Recovery — has published an undated photo of Joe Biden and his son with the former president of Kazakhstan and billionaire oligarch Kenes Rakishev. Rakishev reportedly dined regularly with Hunter Biden and tried to get him to invest in New York, Washington, D.C., and a Nevada mining company.

A Daily Mail report published Friday detailed Hunter Biden’s alleged work with Rakishev, claiming he dined regularly with the Kazakh businessman and attempted to facilitate investment for his cash in New York, Washington, DC, and a Nevada mining company.

But Rakishev, who enjoys close ties to Kazakhstan’s kleptocratic former president, reportedly ran into trouble when Western business partners realized that the opaque origins of his reported $300 million fortune could become a “liability,” the Mail reported.

Rakishev ended up investing a million dollars in Alexandra Forbes Kerry’s production company. I guess it sure helps when you know someone.

Meanwhile at the super secret undergound HQ of the DOH-j....Zzzzzzzzzzzzzz!

Wonder if Fox still has a camera at Biden home waiting for him to come out of the basement!

Adam Schiff has determined that is body doubles of Joe and Hunter from the Kremlin.

7 posted on 10/21/2020 9:11:20 AM PDT by pas
[ Post Reply | Private Reply | To 1 | View Replies]
To: All
This gambit by Bill Clinton (meddling in a Kazakh election) got the uranium scheme going.
Bill's calculated handshake was a bonanza for the Kazahk president's re-election.
Nazarbayev responded in kind and signed-off on the initial phase of the US uranium assets takeover. 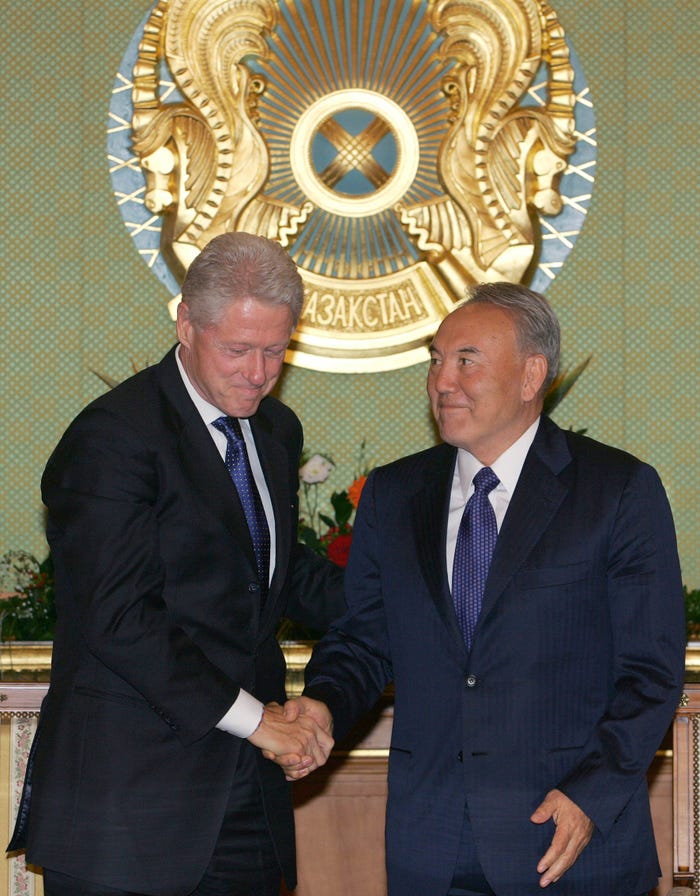 NOTE Kazakh is remembered as the last state to peel off from the USSR.

CIRCA 2015 A Pulitzer Prize-winning New York Times reporter claims that former President Bill Clinton falsely denied hosting a meeting with Kazakh officials when she tried to write a story that involved his foundation several years ago.

Jo Becker, who works on the newspaper's investigative desk, said Clinton only confirmed the meeting took place after she informed him there were photographs.

Clinton's role in a deal that involved Kazakhstan, the Russian government, and a man (Giustra) who donated millions to the president's charitable foundation were detailed in a story Becker published on Thursday.

That article revisited some of her earlier reporting and included information from the upcoming book "Clinton Cash," which is generating widespread headlines amid a flurry of reports suggesting it will raise serious questions about Clinton's family foundation.

The donor in question is Canadian mining executive Frank Giustra, a longtime friend of the former president who has given tens of millions to the Clinton Foundation in the past few years. (A couple of hours after the NYT story was published, Giustra issued a defiant statement. We've included that below.)

Becker initially wrote about the February 2007 meeting between Clinton, Giustra, and executives from the state-owned nuclear company Kazatomprom in 2008. The gathering took place at Clinton's home in Chappaqua, New York.

"When I first contacted both the Clinton foundation — Mr. Clinton's spokesman — and Mr. Giustra, they denied any such meeting ever took place," Becker recalled in footage aired by Fox News on Thursday. However, Becker said Clinton and Giustra both changed their stories after she confronted them with evidence to the contrary.

"And then when we told them, 'Well we already talked to the head of Kazatomprom, who not only told us all about the meeting, but actually has a picture of him and Bill at the home in Chappaqua, and that he proudly displayed on his office wall.' They then acknowledged that yes, the meeting had taken place," Becker continued in the television interview.

The purpose of the meeting, then Kazatomprom President Moukhtar Dzhakishev told The Times, was to discuss Kazakhstan potentially buying a 10% stake in Westinghouse, a US nuclear company. Becker's 2008 story also noted one of Giustra's companies secured a deal to buy uranium deposits from Kazatomprom in 2005.

That agreement was made after Clinton accompanied Giustra on a trip to Kazakhstan. During the trip, Giustra and Clinton met with Kazakhstan's President Nursultan Nazarbayev.

Clinton issued a public statement praising the Kazakh leader despite his questionable, antidemocratic record. The Times called the praise a "propaganda coup" for Nazarbayev. (he later "won relection" w/ an unbelievable 90% of the vote)

"Just months after the Kazakh pact was finalized, Mr. Clinton's charitable foundation received its own windfall: a $31.3 million donation from Mr. Giustra that had remained a secret until he acknowledged it last month. The gift, combined with Mr. Giustra’s more recent and public pledge to give the William J. Clinton Foundation an additional $100 million, secured Mr. Giustra a place in Mr. Clinton’s inner circle," wrote Becker and another reporter, Don Van Natta.

A spokesperson for the Clinton Giustra Enterprise Partnership told Business Insider they are "working on a formal statement" in response to a request for comment on Thursday. Clinton Giustra Enterprise Partnership is an initiative of the Clinton Foundation that was cofounded by Clinton and Giustra in 2007. A Clinton Foundation spokesperson did not respond to a request for comment.