European intelligence agencies are deploying resources to track QAnon as the conspiracy theory spreads beyond the US, sources say
www.businessinsider.com ^ | Oct 13, 2020, 11:32 AM | Mitch Prothero 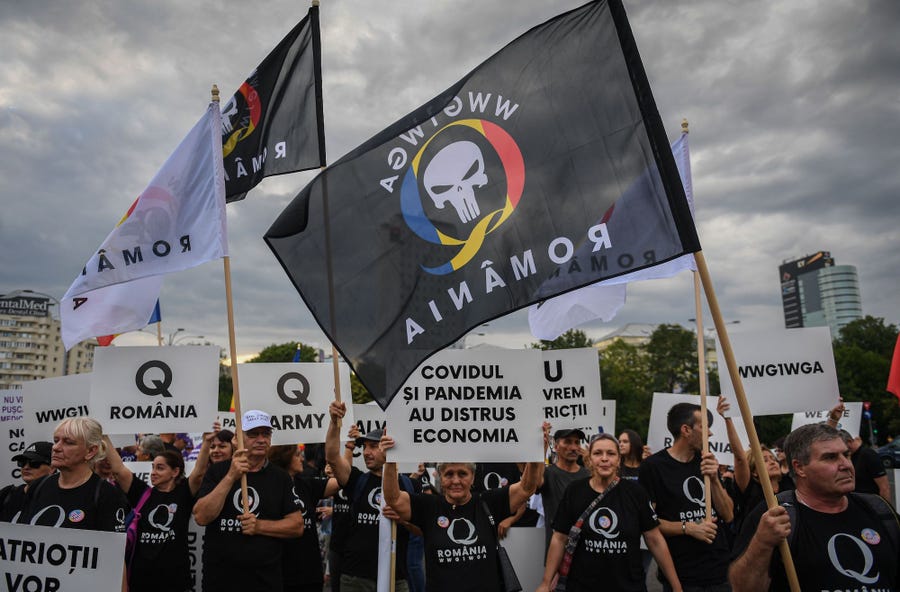 QAnon is a US-centric conspiracy theory movement, but is attracting supporters beyond its shores. Security officials in Belgium and France say that their agencies are reconsidering earlier decisions to ignore the movement, conceding that it could bring about violence in their countries. A Belgian official argued that QAnon offers similar comfort to its followers to Islamic extremism, and may attract similar personalities. An official in France said that he and his colleagues are not focusing strongly on QAnon now, but that he would not be surprised if that were to change. Visit Business Insider's homepage for more stories.

Europe's domestic intelligence and law enforcement services have apprehensively watched the QAnon conspiracy theory migrate from the US, and now consider it a significant security concern.

The assessment was given by two security officials contacted by Insider, both of whom spoke on condition of anonymity given the nature of their work.

QAnon advocates claim that the US controlled by a cabal of politicians, celebrities and media figures who engage in child abuse and pedophilia.

Its supporters believe that President Donald Trump will eventually move against these people, and seek clues from an unknown government insider known as Q.There is no evidence to support the theory, none of its foretold reckonings have taken place.

Nonetheless, its popularity has grown in recent years, despite efforts from social media companies to evict QAnon from their platforms. It has also garnered followers in Europe.

A Belgian counter-terrorism official told Insider that many European services like his own are now rethinking an earlier decision to ignore QAnon as a solely American phenomenon.

Why track Q Anon if the theories are bunk?

Seems to me they are giving Q Anon credibility.

I apologise up front...

No wonder we had two liberate their collective asses TWICE.

You just Boosted Q’s profile on the international stage..

They understand that they are lending credibility to it by doing this, right?

There is no evidence to support the theory, none of its foretold reckonings have taken place.

I have never been a Q acolyte and I always had an aversion to the kyrptic and non specific nature to a lot of the early stuff I saw (mostly on here) but I have to say, the above quote is absolutely no reason to assume it’s all false, and in fact sounds rather propaganda-esque.

Yes, it does. Interesting. Why are they afraid?

What about Bigfoot? UFOs? Loch Ness monster? Don’t we deserve to be protected from those conspiracies too?

When are they going to get around to doing something about that Nostradamus guy?

15 posted on 10/14/2020 12:50:44 PM PDT by The Toll
[ Post Reply | Private Reply | To 1 | View Replies]
To: Red Badger
A Belgian official argued that QAnon offers similar comfort to its
followers to Islamic extremism, and may attract sirmilar personalities"...

Islamic extremists are never actually recognized, unless
a politician wants to smear a third party.

Well whatya know, they did get it all along after all.

16 posted on 10/14/2020 12:51:05 PM PDT by DoughtyOne (If you're neverTrump at this point, drop the charade, you're just I never the United States.)
[ Post Reply | Private Reply | To 1 | View Replies]
To: Red Badger
QAnon is a far-right conspiracy theory. It alleges that a cabal of Satan-worshiping pedophiles is running a global child sex-trafficking ring and plotting against President Donald Trump, who is battling against the cabal.-Wikipedia

Sounds about right. Is Hunter Binden part of the cabal?

Ooooo...I see black SUVs pulling up to the house....SWAT teams getting out.... Maybe I shouldn't have asked the question.

The question of QAnon is an interesting one. Today, Q has been posting links to Catherine Herridge’s reporting on SpyGate. He has also highlighted Hunter Biden’s laptop contents. President Trump has retweeted a report that Obama/Biden his Osama Bin Laden in Iran and paid Iran to move him to Pakistan for a “trophy kill”. Interesting times!

We just want the facts.