I know a thing or two about hiring private security as a journalist and public speaker for 30 years, including contracting security through Pinkerton. So let me drop some facts to deconstruct this heaping pile of @9NEWS manure. /

TOPICS: Culture/Society
KEYWORDS: denver; michellemalkin Navigation: use the links below to view more comments.
first 1-20, 21-36 next last
Denver 9NEWS has a lot to answer to.
1 posted on 10/12/2020 6:15:27 AM PDT by artichokegrower
[ Post Reply | Private Reply | View Replies]
To: artichokegrower

I would bet a lot of documents, posts, etc are being deleted right now. “9News/NBC” and the specific commie employee/activist are going to be counting on the Soros DA to help them out.

I wonder if there is a Federal law that was broken that would allow a US Attorney to take over this case - especially the future lawsuit.

Well, whadayaknow about that! The “unbiased” media is now engaging in assassinations!

4 posted on 10/12/2020 6:37:59 AM PDT by eastexsteve
[ Post Reply | Private Reply | To 1 | View Replies]
To: artichokegrower
The news people were hovering over this, waiting for the Trump supporter to do something so they could get it on camera. Never mind the antifa crowd that was throwing soup cans at the police.

I've been seeing news crews doing this for years, trying to bait and get a reaction from a conservative, and then laugh about it afterwords.

The news crew was effectively egging this confrontation on, by filming it.

Finally, the victim walked away from the confrontation, and walked into the news crew, who reached and tried to grab the victim's spray or weapon he had in his holster. The victim properly swatted the “security guard” away, and, we can see by a sequence of pictures taken by the Denver Post photographer *backed off*.

The Denver Post photographer got a series of very clear pictures of the event, but the ones where the killer drew his gun, oddly enough, are missing. My guess is they were erased.

Counting on the Denver police to get to the bottom of this is pointless. They've been in the bag for antifa. 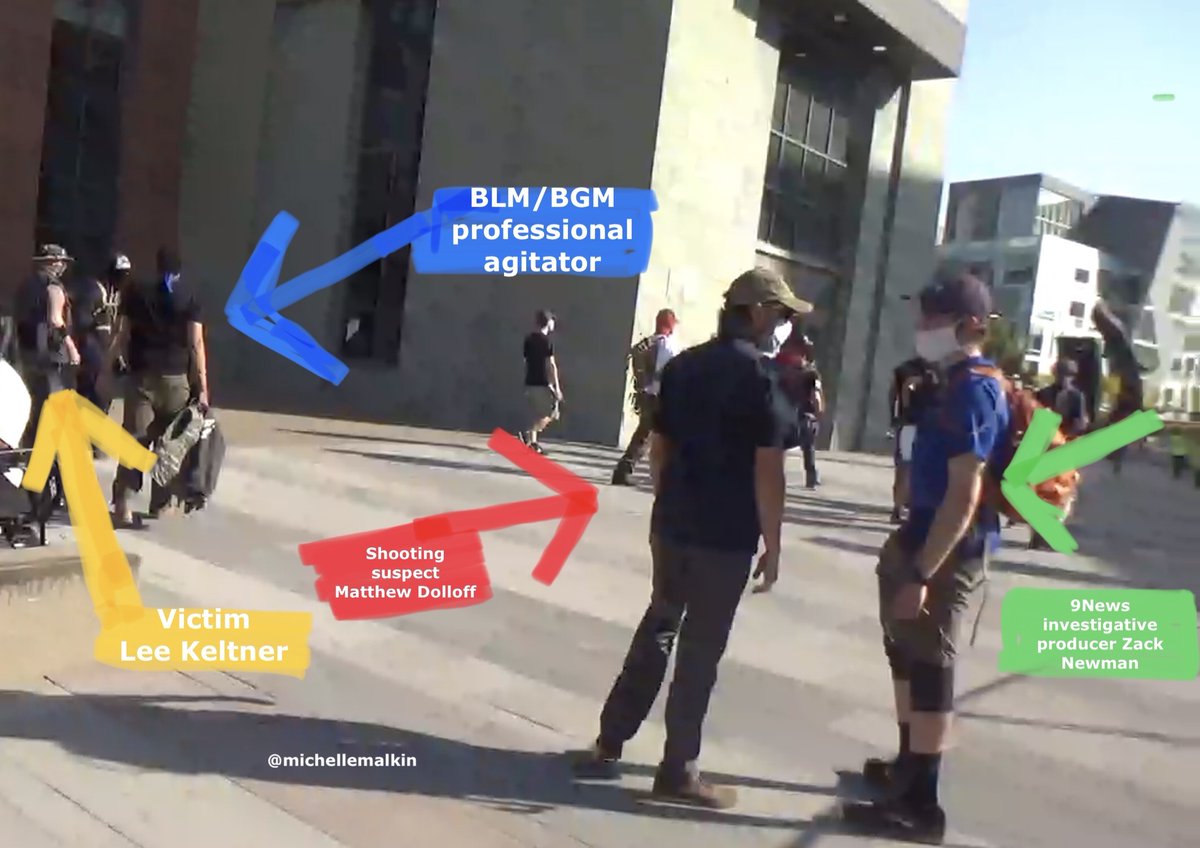 The shot from far away shows the gunshot and the mace cloud happening very close together, I think less that a second. That tell me that the gun was already out when the victim sprayed.

Here’s a patched together video from the still photos. The guy who put this together says there some frames missing that show initial contact and the draw.

Make the News, So that you can Report the News.

Looks like the shooter had gun in hand and raising it up while the victim has yet to raise the mace can. IOW’s the first moment of the draw.

I say again: when you confront an enemy in their own sandbox, you have to have the overwhelming upper hand. Openly protesting in a liberal stronghold with a can of mace is not going to get you there. This is a war. They are the enemy. They will kill you if given the chance. Act accordingly.

The “News” guys are organizing/co-ordinating trigger pullers and agitators (provocateur).

The agitators provoke a citizen into a reaction, then the trigger puller pounces and blindsides the target.

I am thinking you just keep walking and ridicule the agitators.

The younger trigger puller escalated by pulling his gun. Why? I do not try to understand the insane.

The older guy was retreating and pulled his mace as a last resort.

Issues: how to defend yourself against a lunatic out for blood or a trophy?
What if they are marching through your neighbourhood at 11PM?

You have that backwards. The Patriots were holding a “Support the Blue” rally that BLM/Antifa crashed. They tried provoking violence several times and failed...............until Dollof decided to simply shoot someone.

The older guy also had a firearm which he did not attempt to use. Maybe because he's a decent guy, or maybe because he had the mace in his right hand which was the hand he would have to use to draw his firearm.

17 posted on 10/12/2020 7:31:10 AM PDT by freeandfreezing
[ Post Reply | Private Reply | To 15 | View Replies]
To: artichokegrower
So do the police. They stated that the shooter was not affiliated with Antifa shortly after the murder. Then they changed their position, stating that they have no information about the politics of the shooter.

One or both of those statements are false, they can't both be true. The first statement by the Denver police is demonstrably false based on what they are saying now.

Who in the Denver PD decided to put out fake information? And why.

"Two guns and Mace were found at the scene, said Joe Montoya, the division chief of investigation at the Denver Police Department. The police have camera footage of the shooting and are investigating, Montoya said."

The @9NEWS propaganda continues. Listen for the shooter-sympathizing journalist at :22 describing the shooter “PEACEFULLY laying down his weapon.”