The liberal media are losing their collective minds over President Trump's behavior during last night's debate. But Mika Brzezinski found an odd way of striking a blow for civility on today's Morning Joe. She accused her competitors at Fox News Channel of having undergone a crude removal of part of their brains.

MIKA BRZEZINSKI: Listen, there is an entire network that's covering this debate as if it were a proud moment for the president. And this situation has gone too far, with a bunch of lobotomized hosts and anchors, who are just waiting for his phone call. And it's pathetic. 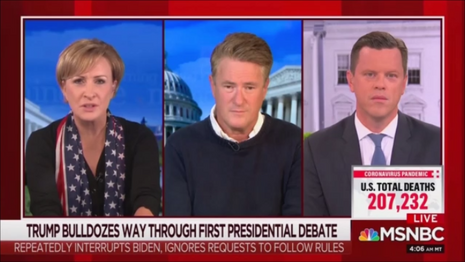 What’s “pathetic,” Mika, is you resorting to this kind of crude insult of competitors who have consistently beaten you in the ratings since forever!

That’s funny because I’ve been saying for years that radical leftists (read insane) like them need a lobotomy.

What they really hate is a Republican candidate that will kick you in the balls...too effin bad. The days of Mitt Romney and Bob Dole are long gone. Trump will throw back the hate that they throw at him on a daily basis. The left cannot stand a street fighter, they want him to cower and he won’t.

Look at the vile sewage they have spewed at Trump beginning with the lie that he removed the bust of MLK from the Oval Office. A lie that went around the world, a lie which threw gasoline on a nation shattered from Obama’s racist identity politics.. Too bad for their hurt feelings, and screw Biden and his Logan Act, and 3 years of Russian bullshit. The whole thing was a set-up, that Hillary was running. Weissman should be disbarred. Mueller dies in disgrace.

rich, coming from such a tart.

Mika Brzezinski: It's our job to control exactly what people think

Who cares what a whore thinks. She’s looking hagged out lately. I bet she gets tossed aside soon.

She got mugged at an ATM, and she’s still a leftist.

I think she needs to have brain matter added, not subtracted.

More proof the lefties are crying in their beer over Biden's doddering debate performance.

Who’s the guy on the left?

Next to the murderer in the middle.

Gee, it is good there are such smart people to explain things to us rubes.

Mika, get ready for election night. Going to be fun watching Trump win...again.

Honestly, I have never watched even a second of MSNBC, I know from the pictures the guy in the middle is the one who killed his mistress in his office, but the guy on the left seems a little old to be going through Gender Dysphoria???

She was cuter when she was platinum blonde and all tarted up. She looks like she is going all divorced Connecticut housewive “I met a woman at Yoga” lesbo now with the frump and rat fur brown hair.

The DemonRats will be doing this on November 4th.

Did she mention she was looking in the mirror?

Not all, but Chris Wallace for sure.

She ain’t aging well. The ugliness inside is finding its way out.