PORTLAND, OR (KPTV) - Police are investigating a shooting that occurred in southeast Portland Saturday night.

At 9:09 p.m., officers responded to the reported shooting at Southeast Water Avenue near the Hawthorne Bridge.

At the scene, police located a victim with a gunshot wound to his chest. Officers provided emergency first aid and applied a chest seal before the man was taken to an area hospital.

Police described him as being in critical condition Saturday night.

Police said the shooting is not related to Saturday's protest.

Looks to me like he was shot in the back
https://www.youtube.com/watch?v=TmXMNtk_TWw

“Police said the shooting is not related to Saturday’s protest.”

The guy was apparently at the protest and a Trump supporter and his shooting was just an “act of God?”

3 posted on 08/29/2020 9:52:53 PM PDT by ConservativeMind (Trump: Befuddling Democrats, Republicans, and the Media for the benefit of the US and all mankind.)
[ Post Reply | Private Reply | To 1 | View Replies]
To: PROCON; Twotone; VeryFRank; Clinging Bitterly; Rio; aimhigh; Hieronymus; bray; 1malumprohibitum; ...

If the shooting had nothing to do with the protest, why did the guy taking the video say he got mace in his eyes? Do they just have mace dispensers at every intersection in Portland?

Fake News Media to English translation: The victim was a Trump supporter, the shooter was a Biden supporter.

Why the hell are DemocRAT mayors allowing permits for protests? This is backfiring big time. Mayor Daley Sr and Jr did not allow this BS!

They cracked down in 1968, and Nixon won. They probably can’t win no matter how they handle it, since most thinking people can see the Democrats support the rioters.

How is it that someone always just happens to be filming when these things happen?

Cuz every time a crime happens anywhere in the city while the cops are overworked and exhausted and distracted by the nightly mayhem which has now become the "baseline" in Portland, it means they and the Emergency Services won't be able to respond in time to save lives or protect property or catch perps.

Looks like the black guy in white shirt and socks just pulled and shot the other guy in the back. Black on white crime, of course.

This article says the victim had a Patriot Prayer hat -- a well-known conservative pro-Trump group -- and materials bearing "Infidel" and "thin blue line". Pro-cops, pro-Trump. I smell a coverup.

SOURCE: BREAKING: Man Shot and Killed in Portland After Pro-Trump Rally in City

A couple posts down, someone says:

It looks like the guy is just walking in the street when the guy on the skate board rolls up behind him and shoots him in the back.

It looks like Twitter deleted that Tweet, which I think would make them guilty of misprision of felony as well as an accessory after the fact to murder.

#PORTLAND UPDATE: It has been confirmed from our sources that one of the deceased is from the "Patriot Prayer" Group. Joey Gibson's cadre was directly attacked and he is a part of the group to confirm the deceased.

Portland is out of control.

This is the suspected shooter in the white short, seen from the back, in Portland where a blue lives supporter was shot and killed. pic.twitter.com/WufdzWN0xW

This is the suspected shooter in the white short, seen from the back, in Portland where a blue lives supporter was shot and killed. pic.twitter.com/WufdzWN0xW— Ian Miles Cheong (@stillgray) August 30, 2020

This is the suspected shooter in the white short, seen from the back, in Portland where a blue lives supporter was shot and killed. pic.twitter.com/WufdzWN0xW— Ian Miles Cheong (@stillgray) August 30, 2020

No, the victim was shot nearly point blank in the chest, as the victim walked towards the shooter in a bravado or threatening, intimidating manner or posture.

RIP to the victim

I do wonder why right-minded people are venturing anywhere near downtown Portland. And going there to “demonstrate for Trump” accomplishes nothing except to put your life in danger. The time would be better spent volunteering at a Trump campaign phone bank. Or working an extra shift to make money that can be donated to a MAGA candidate’s campaign warchest

Going into enemy territory to “demonstrate” is essentially looking to be mugged and maybe get into a rumble.

Just as I wouldn’t walk in a high crime part of town after dark, or wouldn’t jump the fence at the tiger exhibit at the zoo, I’d steer clear of Antifa-held areas in Portland or anywhere else. Theres a lot to lose by going there and nothing tangible to gain.

why? because Portland and suburbs aren’t all raving lunatic liberals. I think somewhere around 30% republican maybe more?. And thousands should be able to voice their point of view without a mob showing up to do them harm because 300 hard core mental patients, some of which also travel to get downtown, think they own the city.

Thousands meet for Trump 2020 Cruise Rally in Clackamas
KOIN 6
Many demonstrators said they were fired up after the Republican National Convention and wanted to come out and provide a counterpoint to the other protests that have been happening in Portland for the past three months.
https://www.youtube.com/watch?v=bqYVjArO9yg&feature=youtu.be

instead of ignoring these folks, who were out a full 2 hours before antifa have ever bothered to show up, and usually at the precinct or PPA instead of downtown, antifa put out an all points call to get downtown where they formed lynch mobs. This particular mob smashed the windows of a gas station that a patriot prayer person went to for safety:
https://twitter.com/MrAndyNgo/status/1299934635829256194
https://twitter.com/VzlaUfo/status/1299965922665541637

another mob thought it was a peachy keen idea to throw themselves in front of moving vehicles, disregarding the vehicle code that says a pedestrian can’t intentionally try to cause an accident:
https://twitter.com/JermaineWatkins/status/1299962262371917824 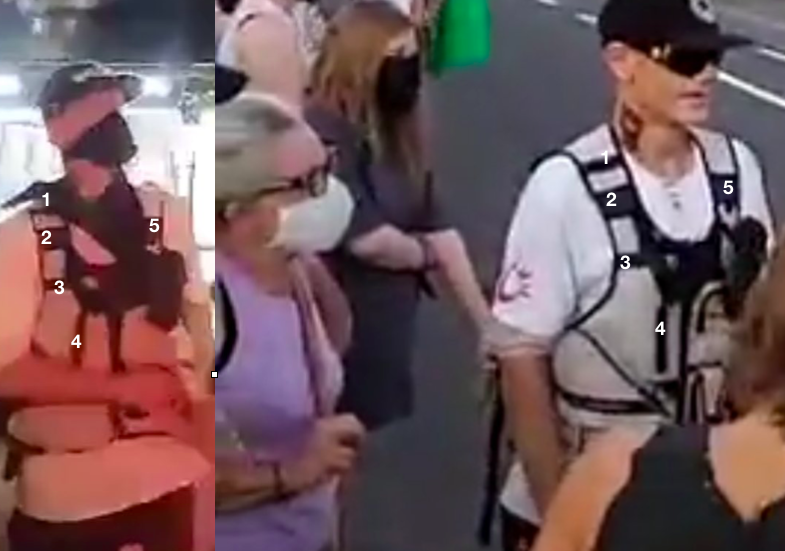 I was a kid growing up in Chicago in 1968. Obama’s friends were hurling bags of urine and feces at police. Mayor Daley shut that s**t down. Literally.