New video footage of the police-involved shooting in Kenosha Wisconsin reveals the moments leading up to the fatal snafu, according to the Western Journal.

The new video reveals that Blake had escaped the grip of Kenosha police officers and moving toward the front of his vehicle. After he entered the vehicle, shots could be heard.

The Daily Mail reported that On July 6, Blake had been charged by Kenosha County prosecutors with sexual assault, trespassing and disorderly conduct and an arrest warrant for him had been issued.

On Sunday, Wisconsin Gov. Tony Evers condemned the officers for the shooting.

“While we do not have all of the details yet, what we know for certain is that he is not the first Black man or person to have been shot or injured or mercilessly killed at the hands of individuals in law enforcement in our state or our country,” the Democrat said on Twitter.

“Anytime deadly force is used, our hearts go out to those affected by it,” Pete Deates, president of the Kenosha Professional Police Association, said in a statement, according to the Kenosha News. “We assure you an independent investigation is being conducted by the Wisconsin Department of Justice, Division of Criminal Investigation.

“Until that investigation is completed, we ask that you withhold prejudgment about the incident and please the let [sic] process take place. Governor Evers’ statement on the incident was wholly irresponsible and not reflective of the hardworking members of the law enforcement community, not to mention the citizens of the City of Kenosha.

“As always, the video currently circulating does not capture all the intricacies of a highly dynamic incident. We ask that you withhold from passing judgment until all the facts are known and released. We, along with the citizens of the great City of Kenosha, ask for peace and to let the process play out fairly and impartially.”

Kenosha County District Attorney Michael Graveley confirmed that his office is investigating the shooting, according to CNN.

“We’re asked to make two determinations based on the evidence that is presented,” Graveley said. “One, did any officer, in this case, commit any crimes, and two, are there any crimes that we believe were committed that we can prove beyond a reasonable doubt?”

“We’ve got 200 officers, I don’t know how many armored vehicles,” he said, according to The New York Times. “It’s not enough. It’s a battle we aren’t able to keep up with.”

More from The Western Journal:

As Kenosha, Wisconsin, smoldered after a second night of arson and riots, a new video emerged to show Jacob Blake wrestling with police officers on Sunday moments before he was shot.

Kenosha exploded in fire and violence Sunday night after Blake, 29, was shot multiple times by police. He underwent surgery Sunday and was in stable condition Monday, the Milwaukee Journal Sentinel reported.

An initial video of the shooting showed Blake disregarding the commands of police officers who had their weapons drawn as he walked away from them and moved toward the driver’s door of an SUV. Officers followed Blake, who opened the door to the vehicle and leaned into it.

As the process played out, rioters took to the streets Monday night, as they had Sunday, to torch buildings in downtown Kenosha.

Just let the ferals be ferals in their natural habitat.

If they were cats we would take them in and have them neutered or spayed. Maybe Mike Tyson could bite off a little piece of their ears. 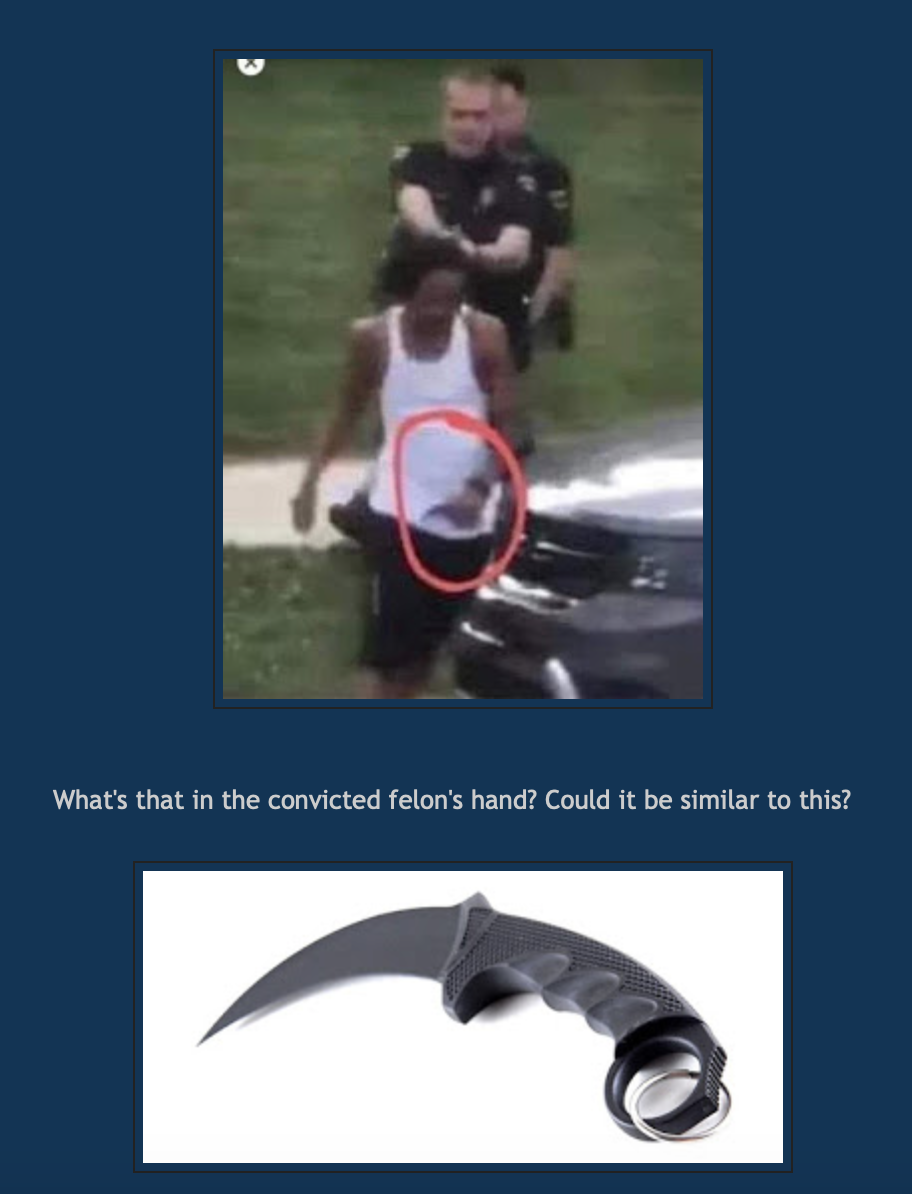 Heard that this loser/scumbag is now a paraplegic.

Wish he was worm food

Shameless exploitation of select shootings as a way to foment civil unrest: The Democrat/Media MO.

Could it have been a setup to hurt the mood and moment of the RNC, and give it a darker tone? Yeah I know impossible. The left has too many coincidences working in their direction.

You have hit upon the most important question of all. Was Blake carrying a weapon? Or was there a weapon in his car?

If the answer to either question is yes, then this was probably a good shoot (not that the rioters would care). But if Blake did not have access to a weapon...that cop is in a ton of trouble.

The picture you posted is interesting, but it’s kinda grainy. That could be a knife. It could also be a set of car keys. I hope the image can be enhanced.

Is almost ALWAYS what happens that leads to the shooting.

It’s not FREAKING ROCKET SCIENCE! Resist arrest.. physically fight with a cop trying to arrest you and you will likely get shot. Don’t matter what color you are.

Shameless exploitation of select shootings as a way to foment civil unrest: The Democrat/Media MO.

Hands up don’t shoot!!....oh never mind, sorry about that

I can’t breathe because he’s on my neck....oh never mind..

Man shot in front of his kids in the back!!!

13 posted on 08/25/2020 6:16:34 PM PDT by janetjanet998
[ Post Reply | Private Reply | To 8 | View Replies]
To: Fester Chugabrew
On Sunday, Wisconsin Gov. Tony Evers condemned the officers for the shooting. “While we do not have all of the details yet, what we know for certain is that he is not the first Black man or person to have been shot or injured or mercilessly killed at the hands of individuals in law enforcement in our state or our country,” the Democrat said on Twitter.

What is wrong with these governors? Do they realize that they are fomenting and then excusing looting and destruction?

Why haven’t we heard the 911 call? Why exactly were the cop called?

It is part of their plan.

It will come out eventually if it was.

Problem is with concerning the policemen, they have ALREADY been condemned.

Wow! Imagine what would have happened if he had cooperated?

“No mother should have to fear for her son’s life every time he is wanted for sexual assault.”

Calling a shooting a “snafu” is insulting to the readers — no matter how anyone views the event.