Lindsey Graham: ‘I Don’t Think Bubba Wallace Has Anything to Apologize For’
Breitbart ^ | July 06 2020 | PAM KEY

Has @BubbaWallace apologized to all of those great NASCAR drivers & officials who came to his aid, stood by his side, & were willing to sacrifice everything for him, only to find out that the whole thing was just another HOAX? That & Flag decision has caused lowest ratings EVER!

TOPICS: News/Current Events
KEYWORDS: bubbawallace; callmemissgraham; lindagraham; lindseygraham Navigation: use the links below to view more comments.
first previous 1-20, 21-40, 41-60, 61-80 ... 101-102 next last
To: MagUSNRET
I pray Linda is NOT re-elected

It's a shame we cannot do better in party politics and actually run a true conservative. 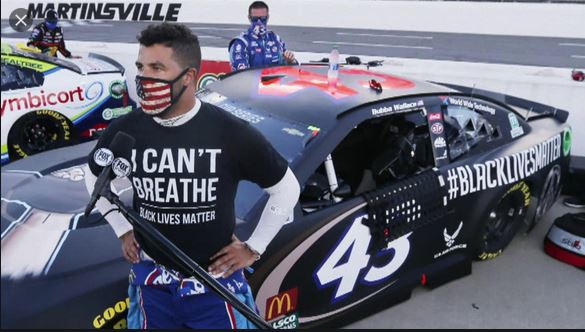 A car sponsored by a Communist front group...Earnhardt turns in his grave.

Might I suggest linda, that you spend less time worrying about the Wallace hoax and more time struggling to keep some of the many, many political promises you’ve made?

This is the year Linda gets primaried, right? RIGHT????

Hold your water. You sound like Karl Rove. The Bubba stunt was no better than the Jussie thing so I couldn’t be happier he got called out.

I’m glad he got exposed too, but it’s water under the bridge

I’m far from Rove, F him

I understand the American voter, esp touchy feely females. We don’t need this distraction, wake up

Why does Hannity keep having this clown on his show?

Can’t someone, ANYONE, beat this guy in a primary????

Noosecar has dishonored both.

Graham won his primary and is now reverting to form. Predictable as the sunrise.

Sure he does he took a lie and ran with it.

No chance Linda will be primaried. This is an open primary state which allows Democrats to nominate the Republican of their choice.

You can sure tell Linda won the primary. No more pretense, McCain’s butt buddy has returned.

Graham is the epitome of who you would never want to have your back or even to have a gun in the foxhole with you.

Let’s be honest - Trump had nothing to gain by revisiting this again. He will only engender sympathy for Wallace. While any of us would apologize if we wrongly accused someone of something, Wallace is not any of us, and he is not held to the same standards.

Confederate, the subject at hand unfortunately

One can tell you were a Democrat. We’re not forgetting any flags.

Bubba Wallace “The conversation I had with Steve Phelps (NASCAR president) I would say, and I’m speaking for him, probably one of the hardest things if not the hardest thing he’s ever had to tell somebody. Tears running down his face. Choked up on every word that he was trying to say, the evidence he brought to me that a hate crime was committed, quote unquote.””

GIRLY MAN? In charge of NASCAR? CRYING? TEARS? CHOKED UP?

over a garage door pull handle?

OMG! I’m so glad I dumped NASCAR. I will NEVER watch another race NEVER!

People who are stupid, and don’t realize they are stupid have a great deal of difficulty apologizing for being stupid.

Bubba Wallace: I saw a noose.