In revolutions, the second generation, the one that’s been weaned on the revolution, is always truer and purer in its beliefs than the first generation. Like all true believers, these children of the revolution will brutally purge heretics, which is why revolutions always eat their own. The most famous recent example is Mao’s Cultural Revolution, which saw students violently destroy anyone who deviated from Maoist doctrine. We’re witnessing that now across corporate America, especially in the media, as college grads destroy the woke leftists who hired them.

China’s Cultural Revolution began in 1966. When it ended a decade later, tens of millions of people had been brutally persecuted, and hundreds of thousands, perhaps even as many as 20 million, people had been slaughtered in massacres across China. Then, as now, the revolution was incubated in the country's colleges.

James David Banker’s article about the Cultural Revolution describes how schools were turned into places of propaganda rather than knowledge and how the indoctrinated students brutally turned on their teachers, their families, and their friends. He then has this to say about the genius behind using public education to revolutionize students:

Mao’s decision to use China’s youth as his vanguard was, by fortune or foresight, instrumental to the revolution’s initial success. The young may be pure in heart, but they are also high on emotion and short on life experience. Simply put, they are natural philistines.

We don’t have to put the ‘offenders’ in a truck with a dunce cap and parade them down the street. With a sign confessing their wrongs.

Just ‘parade’ them on FB or Twitter or MSM.

They start issuing apologies left and right (maybe that is left and left).

2 posted on 06/07/2020 8:33:02 AM PDT by Scrambler Bob (This is not /s. It is just as viable as any MSM 'information', maybe more so!)
[ Post Reply | Private Reply | To 1 | View Replies]
To: SeekAndFind
This article reminds me of Alexandria Ocasio-Cortez.
She is commie through and through.
I think that she hates America ALMOST as much as she hates herself.

An excellent book for middle school aged children to read about how the Chinese schools/govt used children to turn on their parents - Red Scarf Girl, by Ji-li Jiang.

I had amazing discussions with my own boys when we read this book together.

We are about to learn how a minority rules a majority.

Through terror, as always.

“We are about to learn how a minority rules a majority.”

Instead of Mao’s Little Red Book, the Dems could have a Little Red App.

Free one touch ACLU and legal service access in case of arrest.

Full Saul Alinsky and tips from Soros brothers and father.

Inspiring quotes from Pelosi,AOC,Schiff,Nadler, Joe & Mika and, of course, the heroic leader Joe Biden,going on from victory to victory in the downtrodden peoples’ struggle./s

It’s beginning. The left is on a roll and so far there has been no resistance. Former Generals attack the President for attempting to restore order. Even the FBI and police prostate themselves before the mob. Time to start loading magazines.

How long is it going to be before real Americans decide they have had enough? This crap has to stop or there will be a great blowup that cannot be stopped.

There is no way the gimmedats are going to stop. Given an inch they will want miles. I cannot think of a thing that they will satisfy the greedy.

Tucker was making this argument several nights ago- 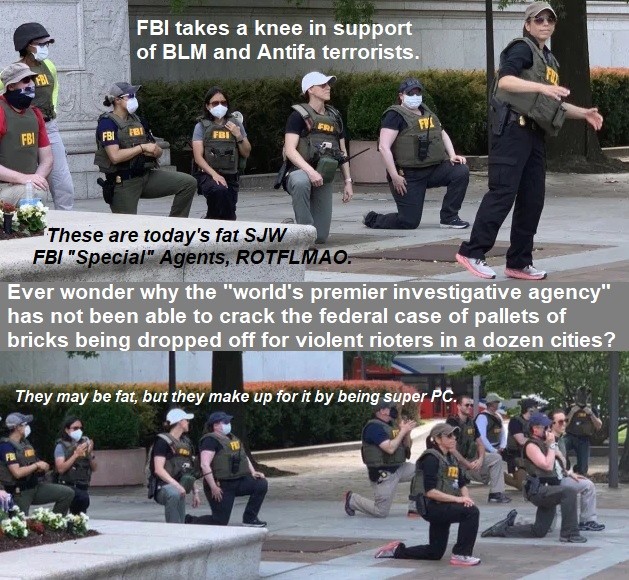 its a marker for how thoroughly the CCP has “invested” in America.

rooting it out productively, without destroying the fabric of America, using the rule of law, will be a generational project.

The CCP would do so one bullet at a time...we’re far more civilized than that

History repeats and the Achilles heal of our country is breached.

What I’ve been saying-—> https://www.americanthinker.com/blog/2020/06/the_issue_isnt_racism.html

I hope not, I don’t relish seeing the US turn into a third world dump right before my eyes (because that’s what happens, almost without exception, when our darker brethren run countries). Anyone for rolling brownouts, a la South Africa? (Because they won’t hire experienced whites-who needs to understand how to do the job when there are titles, good pay, and perks to be had as long as you have the correct skin tone? Who needs reliable power?) Anyone for unabashed racially based “justice”?

Hugo Chavez instituted rolling blackouts and sky high electricity costs to the rich in Venezuela. The poor (his voters) had no blackouts and their power was “free”.