Video from protest, estimated to be 15,000-strong at the time of publication, shows the Lincoln statue defaced with the graffiti reading “BLM” and naming George Floyd, Mike Brown, and other individuals said to have been killed wrongfully by the police.

One side of Lincoln’s pedestal has also had a banner and several placards duct-taped to it, reading “RACISM IS A PANDEMIC TOO”, “SILENCE IS VIOLENCE”, “BLM”, and “ABOLISH THE POLICE”.

They don’t even respect the guy that made it possible for
slaves to be emancipated.

That’s what looney tunes these folks are.

There are rocks with more brain cells.

Here’s your proof this has nothing to do with color or race, being Lincoln of all the figures, to be vandalized.

This is the lit fuse that this screams in your face that this is meant to take down ALL of the United States.

That will teach that racist Lincoln.

Rioter:
“Hey, who was that dude Abraham Lincoln, anyway?”

Co-Rioter:
“Didn’t they teach you nuthin’? He was the white guy that invented the penny. You probably got one right now in your pocket.”

There are a lot of Confederates in London?

I saw they defaced Winston Churchill statue, too. Someday only statues of Spike Lee, Beyonce, Malcolm X , Whoopi Goldberg and H. Rap Brown. All others forgotten.

How would these people know about Lincoln—they are nothing but 100% HATE of America and everyone who loves America. 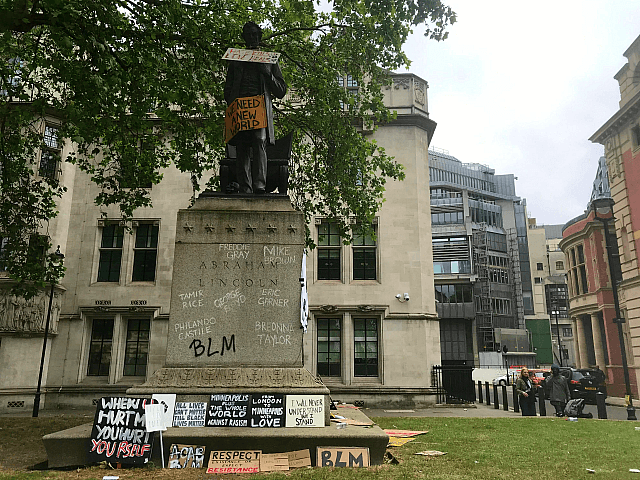 This is the revolution. Sad part is they are going to destroy the cities which they rule.

Those here who constantly trot out the Lee was a traitor trope should note this. After Southern Heroes are cleansed the ‘nationalist’ heroes, Lincoln, Hamilton, TR will be next as commemorating racist, genocidalist, heteronormative policies. America is guilty and it has to be dismantled and ‘reimagined’. That is the path we are on.

It was a massive demonstration in London and odds are that the organizers directed the defacement as an attack focus. There is a very strong LEFT in England and a lot of them are in London. They hate losing out to Brexit and the fact that the Labour Party is weakened by internal divisions. They are 'the mob' who wants the revolution NOW.

So yes, they hate the USofA but they hate almost everything that smacks of civilization as well!

Because he didn’t do anything to help blacks. He was a whiteboy, therefore a born racist.

I wonder how much these ignorant savages are being paid?

Wait till the “yuts” find out that the British named a coin for our Vice-President, the PENCE!

Holy Kippers and Bangers. The headcheese will hit the fan at full speed.

Thanks. I had to wipe my hands off from the jammy dodgers and digestives before typing.