CLAPPER: Absolutely, it is.

BERMAN: And if anyone did leak the contents of these conversations with or without the name, that would be a problem, yes?

BERMAN: We’ve lost the shot. I wonder if we can at least get him on the phone to finish this. Let’s try to get Director Clapper back. All right, we’re gonna work on getting that shot back.

Well, iffen he were exposing Hillary, well - certainly he would be Fort Marcy Parked.

JMO But me thinks Clapper is cooperating. He cannot counter testimony he already gave to please his masters @ CNN, so “went dark”. I believe he was left on the job for awhile after the fit hit the shan. A usual tactic to get sleepers to come forward, and hang themselves by asking the Clap, “Am I in trouble?” Or similar things while being recorded, then investigated. Again, JMO

Clap on. Clap off. 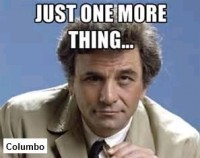 You have a lot more trust in this deep stater than I do.

Did anyone check his neighborhood for the presence of a Scooby Van with a couple of unfilled body bags in the back?

I’m torn between really bad B movie, or some kind of bizarre parody.

Sorry, Titter-dumbs, you may have succeeded in pulling the video, but the transcript lives on.

(I’ll bet the video will resurface before the missing 30,000 emails and the Flynn original 302, though)

14 May: NY Post: Who, O, who can the Flynn leaker be?
By Lee Smith
One obvious route by which ­Obama would have been briefed on unmaskings of US persons was through Chief of Staff Denis McDonough. The list of Obama officials who asked for Flynn’s name shows that McDonough made one request on Jan. 5, 2017...
https://nypost.com/2020/05/14/who-can-the-flynn-leaker-be/

10 May: Fox News: Washington Post had ‘divisions in the newsroom’ over Flynn’s Russia calls, before publishing opinion piece
By Gregg Re; Fox News’ Brooke Singman and Wilson Miller contributed to this report
The leak to Entous may have occurred around Jan. 5, 2017 — when, according to former FBI Director James Comey, then-President Obama apparently was briefed on the Flynn call by then-Director of National Intelligence James Clapper...
https://www.foxnews.com/politics/washington-post-michael-flynn-russia-divisions-opinion

These idiots in the Obama administration were cocky SOBs. They never expected to lose.

Corrupt to the core.

Spying on the incoming Trump administration is beyond the pale.

So many whose “nights are drenched in a cold sweat.”

Yes, they never expected to lose.

But their real insurance policy has been the GOP helping them hide their crimes.

Assisting in the usurpation has obligated the GOP to not only cover up the crimes, but to assist in them occasionally and undermine a legitimate President of their own party.

At that point in time they didn't expect to get fired!

They thought they would be around long enough to keep everything under wrap.

Trying real hard to lose the Senate, are you?

Clapper had to go change his Depends after that question.

That was certainly NOT “a loss of satellite signal” type of cut. Somebody hit a switch.