Every Democrat in the Senate has refused to acknowledge the sexual assault allegations against 2020 presidential candidate Joe Biden that were brought forward by a former staffer, even after new evidence lends credibility to the alleged assault.

The Daily Caller contacted every Democrat in the Senate, asking them if they would even consider the allegations by Biden’s accuser, Tara Reade, who has accused the then-senator of kissing her, touching her and penetrating her with his fingers without her consent in 1993. Each Senate office was given 24 hours to respond but not one did.

Here Are All The Senate Democrats Who Have Refused To Acknowledge The Alleged Assault:

This comes after a 1993 transcript obtained by The Intercept showed that Reade’s mother mentioned on “Larry King Live” that her daughter had problems with a “prominent senator” in Washington. The Media Research Center also uncovered the video Friday of the August 11, 1993 edition of CNN’s “Larry King Live” program. (RELATED: Biden Accuser Tells Us New Video Evidence Proves Her Allegations Are True)

Every one of the senators contacted, besides Manchin, voted against the confirmation of Supreme Court Justice Brett Kavanaugh, due to sexual assault allegations.

TOPICS: Government; News/Current Events; Politics/Elections; US: Delaware
KEYWORDS: biden; clintonnonnews; clowncar; cnn; delaware; google; imeimeimdp0622; joebiden; joeclowncarbiden; larryking; larrykinglive; tarareade
Just remember this the next time they accuse anyone on the right of anything to do with 'sexual assault'. I know I will.
1 posted on 04/26/2020 1:03:28 AM PDT by Bullish
[ Post Reply | Private Reply | View Replies]
To: Bullish

A “Sanctuary City’ for sex offenders

We’re supposed to be surprised?

We’re not supposed to be surprised...

Hey I’m not going to repeat it here but he did some pretty bad things. This wasn’t just a grope. Ropes are bad enough this was sexual assault

It’s fine if a Democrat does it, only conservatives are not allowed to sexually assault people.

Sure they do, replace biden with a kavanaugh and you have a frenzied public and media assault

Hi I am Joe Biden.... I’m a candidate for United States Senate and I think your full of SHITT

Note that one thing this coverage does is make Biden a person of the past, not the future. Americans tend to like candidates that seem to be about the future and not the past.

Trump, of course, should focus on the future. Everyone knows America was great in 2019. But MAGA should be about the future, a new future. Trump should not dwell on the past. Let that be Biden’s legacy.

Rape is ok with democrats

13 posted on 04/26/2020 8:34:33 AM PDT by Vaduz (women and children to be impacIQ of chimpsted the most.)
[ Post Reply | Private Reply | To 1 | View Replies]
To: Bullish; bitt
At least one former Senator, who has recently endorsed Creepy Joe, knew about this sexual assault on Tara Reade.

I'm sure that she discussed it with the man she married in December 1994. Ted Dorman was also a legislative assistant in D.C. for Senator Gaylord Kent Conrad. 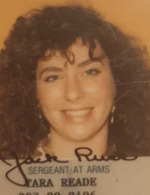 What about whips and chains!!

Just messing with ya!!