Mean Little Mayor Pete Buttigieg’s presidential campaign is over, and how lucky we are to be rid of that nasty piece of work.

Never forget that the failed mayor of South Bend, Indiana, launched his failed presidential bid with hate, bigotry, and lies.

And then, after his hate, bigotry, and lies earned him enough attention from a media that thrive on such things, the Mean Little Mayor morphed into one of the biggest presidential phonies ever.

But the hate came first…

You see, if you want to win attention from the fake news media, spewing hate at Christians is an easy and effective way to do it, which is exactly what this venomous little monster did.

Pete can go back to his shit hole south bend and STFU for once.

Pete just wanted a speaking gig in prime time at the convention to “launch” his 2024 campaign. Probably will be the exact speech Obama made over a decade ago.

Liberals like the “Jesus endorses gays” political and social lie.

HAS to be spirit of antichrist at work. They really do believe this.

I see them say it all the time.

And yes, there are Laodicean churches preaching this toxic spew.

I suspect Pete will be in the cabinet if any Dem wins.
Defense Sec, or HHS.

Good summation of the sanctimonious poseur.

His ads are still running in FL?

Pete can now go home and do all the buttpluggn he wants and not worry about having folks learn he’s a homo:-)

Good point. The infamous 2004 "purple" speech. Which was utter BS coming from a committed leftist. Gee - just like Mayor Pete. 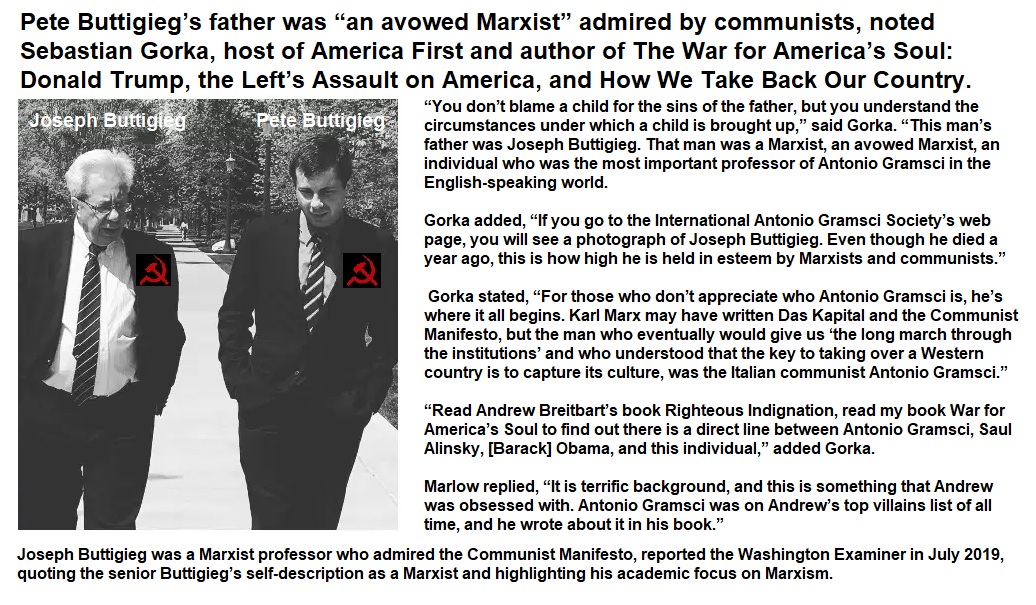 I read the article, or about half of it anyway.

Nolte says Buttigieg is a vicious hate-filled rage machine, and then excerpts these quotes that seem to hold no evidence of hatred, or rage or viciousness in them at all.

The guy is a Soros/DS Marxist/communist sleeper like Obama. He will be back, trust me. The guy uses a relatively small mid-western town in Indiana and a sweetheart reserve appointment in the Navy as window dressing. Like Obozo, the MSM provides silent cover on his past international operations. A little searching on the Internet discloses he is a shadowy CIA operative. His Marxist upbringing makes him a choreographed carbon copy of Obozo. He will bide his time and be back when his puppet masters conclude the time is right to bamboozle the American public and sneak into the WH like Obozo did.

Behind all that lecturing of Christians not practicing their religion there was a river of hate. He was fixated on Christians even pretending he was one himself.

Good article. Thanks for posting. I cancelled my subscription to your issues, Peter.

Agenda E. Neuman. Multi-pronged. Get a stud hug from your hubby.

Built on Hate and Lies?

Pete is moving to West Hollywood - he has a big free house waiting as a pay off for dropping out.

Mean Little Pete is going to do whatever he needs to do to maintain his celebrity jet-setter lifestyle.

He is an attention wh*re narcissist, he’s absolutely addicted to media attention.

Nothing, though, reveals the true cancerous soul of Pete more than his taunting and bullying of Vice President Mike Pence.

My marriage to Chasten has made me a better man. And yes, Mr. Vice President, it has moved me closer to God. Speaking only for myself, I can tell you that if me being gay was a choice, it was a choice that was made far, far above my pay grade. And that’s the thing I wish the Mike Pences of the world would understand: If you’ve got a problem with who I am, your problem is not with me. Your quarrel, sir, is with my creator.

Everything above is a lie. Pence has never commented on Buttigieg’s or anyone else’s lifestyle. But to win media love, this demagogic bully fabricated a straw man to smear a decent man as a bigot.

And then, there’s the blasphemy of claiming God is responsible for his openly gay lifestyle.

Gee, did Pete’s Creator also make Pete a supporter of infanticide? Is that also God’s fault? Did God make Pete a bully and a liar?