Ocasio-Cortez kicked off the exchange by criticizing President Donald Trump’s decision to name Vice President Mike Pence as the head of the Coronavirus task force, saying that he did not believe in science.

Cruz quickly responded by asking the freshman congresswoman a series of scientific questions that were at odds with her ideology — including a query about Y chromosomes.

Ocasio-Cortez responded with a few insults and her resume — and among the scientific achievements, she listed her high school science fair.

Ocasio-Cortez’s conservative critics were not impressed with her accomplishments. 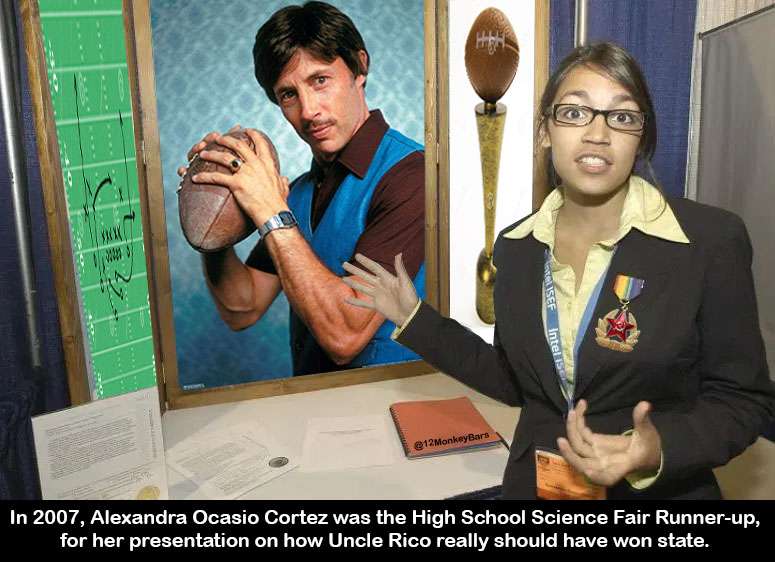 So funny. Cruz tweeted “BTW, congrats on the science fair.”

This is what happens when you take the barkeep out of the bar.

That was funny. Ted Cruz will take her to the cleaners.

Looks funny but a bit too esoteric.

When you are brain dead, do not go into a battle of wits unarmed.

If the poster board was easier to read you would find every paragraph copy-pasted word-for-word from online sources.

She was a bartender, she already solved all the worlds problems it’s just that everyone she told the answers were too busy drinking to pay attention

That’s even more lame than the famous “science fair volcano”.
This broad is really really dumb.

At her age and scarcity of accomplishments, this is best she could offer.

“Ocasio-Cortez responded with a few insults..”

A character from the movie “Napoleon Dynamite.” This explains the character;

I give her full credit for keeping her youthful good-looks!

These are great. Thanks for posting!

The main issue is that she never answered any of his questions. As usual, she avoided the topic and just “clapped back” with rudeness and a bit of tribalism. And her millennial supporters don’t care because they have no idea how a real debate of ideas should work. Stating your credentials and spewing the equivalent of “You’re so dumb. How do you dare question someone like me?” is not an argument.

She is actually quite horse-faced

It’s my understanding she’s going to nominate Al Bundy to the Football Hall of Fame for his performance for the Polk High Panthers in the game where he caught 4 touchdown passes against Andrew Johnson High School.