U.S. President Donald Trump arrived in the west Indian city of Ahmedabad Monday, beginning his first official visit to India with the inauguration of the world’s largest cricket stadium. In his two-day visit, Trump is expected to raise several issues, including religious freedom, with Indian Prime Minister Narendra Modi.

Accompanied by First Lady Melania, daughter Ivanka and son-in-law Jared Kushner, Trump addressed a gathering of about 100,000 people at the “Namaste Trump” event at the newly-built cricket stadium in the city of Ahmedabad in Gujarat, the home state of Modi, Monday afternoon.

“All over the planet, people take great joy in scenes of bhangra, music, dance, romance and drama ... You cheer on great cricketers like Sachin Tendulkar and Virat Kohli,” Trump said to huge applause by the crowd. “This is the country that produces nearly 2,000 movies a year from the hub of genius and creativity known as Bollywood.”

While the focus of Trump’s visit appears to be a trade agreement with India, the U.S. President is likely to raise the issue of religious freedom as well, according to reports.

“Trump will talk about our shared tradition of democracy and religious freedom both in his public remarks and then certainly in private,” a senior U.S. official said last week, according to The Economic Times. “He will raise these issues, particularly the religious freedom issue, which is extremely important to this administration.”

Ever since Modi of the Hindu nationalist Bharatiya Janata Party took office as Prime Minister in 2014, persecution of Christians has risen.

“Since the current ruling party took power in 2014, incidents against Christians have increased, and Hindu radicals often attack Christians with little to no consequences,” noted Open Doors World Watch List, which ranked India as the 10th worst country for Christians. “The view of the Hindu nationalists is that to be Indian is to be Hindu, so any other faith—including Christianity—is viewed as non-Indian. Also, converts to Christianity from Hindu backgrounds or tribal religions are often extremely persecuted by their family members and communities.”

At least one Christian was attacked every day last year, according to Open Doors.

In his speech at the cricket stadium, Trump showered praises on Modi’s record in governance and mentioned that he is “tough.”

America’s trade relations with India have been tense since last June when the Trump administration revoked preferential trade privileges, after which New Delhi imposed tariffs on 28 U.S. products.

Although this is Trump’s first official visit to India, it's his ninth meeting with Modi.

Last September, Trump joined Modi in Houston’s NRG Stadium to address the “Howdy Modi” rally, attended by over 50,000 Indian-Americans. The gathering of 100,000 people for Trump was seen as a reciprocal gesture by Modi.

“India awaits your arrival @POTUS @realDonaldTrump! Your visit is definitely going to further strengthen the friendship between our nations,” Modi tweeted ahead of Trump’s visit.

In the 2016 U.S. presidential election, only 16 percent of the roughly 4.5 million Indian Americans voted for Trump, according to the National Asian American Survey. 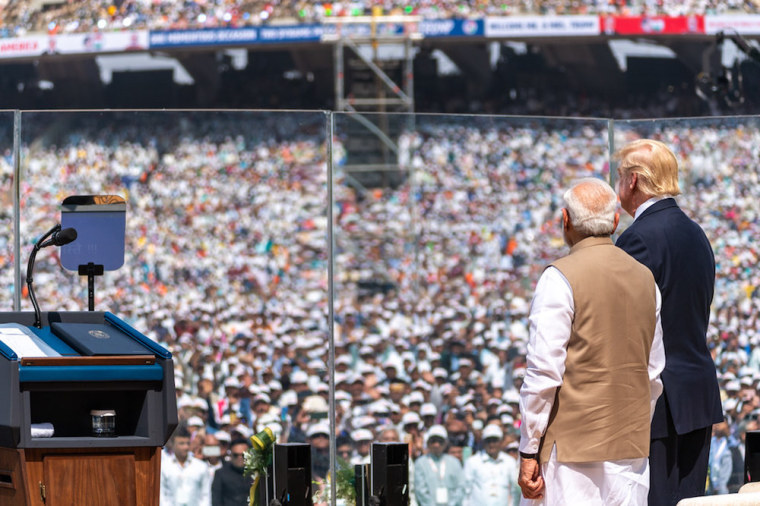 President Donald J. Trump and Indian Prime Minister Narendra Modi stand together on stage before a cheering crowd at the Namaste Trump Rally Monday, Feb. 24, 2020, at the Motera Stadium in Ahmedabad, India.
1 posted on 02/24/2020 7:28:21 AM PST by SeekAndFind
[ Post Reply | Private Reply | View Replies]
To: SeekAndFind

Does Trump know that a half a billion Indians have been murdered by muslims?

That is amazing. Does the Indian guy normally attract big crowds?

“Secret Service is probably having a cow”

Given the number of cows roaming the streets in India, that not hard to believe.

Cows are sacred in India.

I watched some of his speech to this huge crowd this morning. Amazing the enthusiasm with which the President was received.

The people in the crowd all were wearing white baseball type caps - with some writing on them - but never found out what the writing said.

Would love it if someone could find out.

“I don’t like him being there
Secret Service is probably having a cow”
Dan Borgino (sp) was on FOX earlier this AM, he used to be an SS agent. He described the SS procedures prior to the visit. The Prez seems to be pretty safe. On Fox and Friends, very early in the program.

I’ll never forget scraggly cows holding up traffic for a little while at the Delhi airport as I took a cab to a transit hotel.

“Does Trump know that a half a billion Indians have been murdered by muslims?”

He is clearly sensitive to the sectarian issues in India. He gets roaring applause for his lines against “islamic terrorism”.

The Trump Administration has been cultivating relations with India very deliberately, sine initially kicking off his campaign.

India is an alternative manufacturing base and strategic counterweight to China. India is a natural ally against jihadi islamic extremists globally. Indian Americans are a domestic voting bloc that could naturally align with Republicans on several values, and could be peeled away from the Democratic Party. Ivanka is a big hit in Bollywood celebrity Pop culture.

They have such a long road to hoe for true religious freedom and social freedom.

Any nation with Islam in it has a long road to hoe. Islam will slow a nation down until it is strangled. Instead of outlawing Islam, however, outlaw their acts. And really prosecute the lawbreakers.

They need to work on truly getting rid of the Caste system.

That will strangle the nation in the end, if those that are held down turn truly violent.

They're on Modi's home turf I believe. I imagine he's pretty popular there.

“”Today, among Hindi speakers throughout the world, namaste is a simple greeting to say hello.””

I believe they said “Namaste Trump” and I read somewhere that a white hat was placed on every seat in the stadium in preparation for the president’s appearance.

He did seem pretty relaxed and comfortable and not at all pretentious.

I wonder if anyone else caught the look on the PM’s face when the president said late in the speech that “India is the US largest exporter”. He sat up straighter, looked at the president strangely, was more alert and looked out at the crowd and just as he did several business types in the front looked at one another as if the president had made a really big blunder....

I think that’s what the president said but the PM’s reaction caught me by surprise. I should have backtracked to see if I heard him right.

If anyone watches the video later, watch for this and let me know if that’s what I really heard and if you get the same feeling from the reaction of the PM...

OH - thanks for that information!