Private health insurance companies routinely deny legitimate medical claims. Most denied claims for doctors are for in-network (so-called “contracted”) services. In these cases, patients never see a bill, and the doctor must separately try to resolve the dispute with the insurance company. For out-of-network (“non-contracted”) claims, however, the doctor is required by law to send the patient a bill while trying to resolve the billing dispute. Most of these denied claims are for legitimate emergency services. They are simply routine claims, not exorbitant or outlier charges as some folks lobbying for the insurance industry would have you believe.

Don’t take my word for it. Consider recent comments from former health insurance executive Wendell Potter, who spent more than 20 years working for the giant health insurance companies Humana and Cigna. He explains the real cause of surprise medical bills. According to Potter, “It’s because of a scheme quietly hatched by insurance companies like the ones I worked at, where they decide which hospitals and doctors to include in their networks. They make these choices based largely on what will maximize profits and minimize care.”

It’s no wonder then that health insurers are making record profits. For example, UnitedHealthcare, UnitedHealth Group’s most profitable division, generated more than $10 billion in operating earnings last year. What’s even worse, health insurance chief executives are being compensated approximately $20 million per year (at the 10 largest health insurance companies), and at the same time private doctors are closing their practices at a record pace. This is troublesome from a cost perspective, too. Numerous recent studies have clearly demonstrated that when private doctors are forced to work for hospitals, health care costs go up significantly.

Health insurance companies are pushing for a law that would allow them to just pay a fee of their choosing, their “in-network” fee. This rate setting would drive private doctors out of practice even faster and cause more health care consolidation. The in-network rates aren’t negotiated by doctors. They also don’t reflect what doctors are really paid, because hospitals share their own fees with their employed doctors and pay them at a much higher rate. While the new House Ways and Means Committee surprise medical bill legislation, the Consumer Protections Against Surprise Medical Bills Act (H.R. 5826), is a step forward, it still contains a negotiation provision that ties payments to the in-network rate. That type of price control never works, and it will destroy our health care system. Yet health insurance companies are pushing for this huge handout, because it will allow them to dictate the price of treatment. One doesn’t have to be an economist to know that rates in a market like health care are in flux. That’s why this rate setting won’t work.

The solution to surprise medical bills is to have health insurers start paying the bills fairly if they are consistent with what other non-contracted doctors in the area are charging and being paid for those services. It’s that simple. That would be achieved through a fair negotiation process like the one that was set up in the landmark New York State surprise medical bill law of 2014.

Again, don’t take my word for it, but instead look to the recent comment from the New York Health Plans Association (NYHPA), the association that represents, yes, health insurance companies statewide. On the New York law’s method for resolving surprise medical bills, the Association states, “The current Independent Dispute Resolution process has worked well, ensuring that reimbursements for emergency services are fair and reasonable while holding individuals harmless.”

I couldn’t have said it better myself.

Access to care will be restricted, insurance premiums will go up, and many doctors will be forced to shut their practices if Congress goes down the rate setting rabbit hole. A level playing field is necessary, and the right way to do that is to implement a fair resolution process that holds health insurers accountable. At the end of the day, they must understand that we, as patients, won’t let them coerce Congress into passing devastating legislation to address surprise medical bills.

I’m not sure anyone has a love affair with their health insurance carrier. It’s a highly overpriced and underwhelming product.

I may be alone in this, but I have always been more than satisfied with my Private Insurance in the past...before BO...so I cannot relate to those who are so dissatisfied.

I really hope there is a thundering resurgence of NON=government interference and private health insurance this year.

Promises made, hopefully kept this time.

My husband and I are on Tricare which is through the military. We are also on Medicare as we are both senior citizens

So you were happy with your insurance before Obama. Have you not had insurance since?

I have a feeling you misunderstood the poster.

Medicare , Medicaid etc reimburse virtually nothing to providers. What I’m charged as a private pay is beyond reasonable . It’s like you go to the store and pay .25 for bread and I’m paying $5 a loaf. It’s unfair and can’t last for long.

I like the idea of contracting with a chain clinic (like Kelsey-Seybold in Houston) for healthcare. Pay a monthly fee and get a reduced schedule of prices for service, or pay full price without a contract. Go to any of the clinics you want. Select a Dr. or see anyone...

Only state with this law.
When you go to a hospital or emergency room and are filling out the admission forms, you state that “you will not accept out-of-network services”. If some doctor who pokes his head in to say hi bills you, then the hospital that allowed it to happen gets stuck paying the bill.

I was lucky enough to avoid BO’s interference.

Medicare and Medicaid are reimbursed differently. Some practices I know don’t even submit certain bills for Medicaid. It costs more to prepare the bill than what they might get reimbursed for.

12 posted on 02/15/2020 6:09:43 AM PST by ladyjane
[ Post Reply | Private Reply | To 8 | View Replies]
To: Kaslin
This article is VERY misleading. I worked in the industry for over 30 years.
A doctor or hospital is considered in-network when they have agreed to accept your insurance. That means they agree to your insurance carrier's fee schedule. The contract between doctor and insurance carrier means the doctor cannot balance bill. Meaning: the doctor charges $200 for a routine visit. The carrier says that visit is only worth $100. The doctor is under contract to accept the 100 and CANNOT go after you for the balance, the other 100.

A non-contracted (meaning out of network) doctor can charge you whatever they want. Having insurance protects you from crazy high bills.

So, you go to a in-network hospital but you don't know that all the ER doctors there are not contracted with ANY insurance carrier. They can balance bill you. They REFUSE to accept any insurance carrier's fee schedule because they know they can charge you whatever they want, you are a captured audience, unknowing what is coming your way.

It's not the carrier's fault. It's the doctors that refuse to be in-network for ANY carrier. This happens a lot with anesthesiologist too. Blaming only the insurance companies is just wrong.

For me and my spouse our insurance is 20K per year!! and it covers almost nothing. Seems like everything goes against the deductible. It is really very expensive catastrophic insurance.

The tide seems to be changing.
I went to an in network doctor who did a biopsy and sent it out
They sent it to annout of network provider
I looked online and sawbthat I owe the full payment.
Figured I will wait for the bill to start the dance
Out of nowhere the insurance company resubmitted the bill and pays in full
The reason was surprise bill issue
Shocked, never happened before and i have been through this multiple times 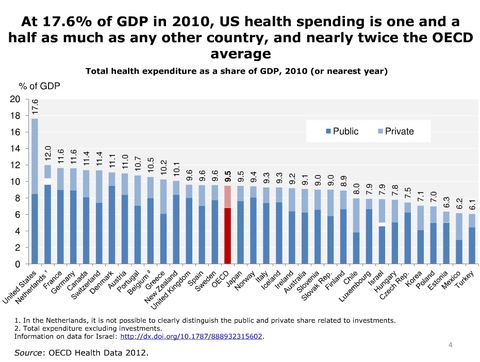 Unfortunately, this is why I predict the socialists will win in the end. Sucks, but this is ridiculousness.

I agree with you. The medical industry has been gouging the consumers for some time. Government controlled healthcare will be a nightmare and worse than what we have now, but there is nothing we can do to stop it.

“According to Potter, “It’s because of a scheme quietly hatched by insurance companies like the ones I worked at, where they decide which hospitals and doctors to include in their networks. They make these choices based largely on what will maximize profits and minimize care.”

Networks are the way HMO’s save money for their customers. The providers are shopped by the HMO’s to take a lesser amount of payment than normal to be guarrenteed the business. When the customer signs up for the plan, with the company, he/she should read who are their network providers to determine, just like the care represented, whether they want to pay for the plan. HMO’s don’t twist the arms of customers to sign.

It’s like shopping at Walmart or Target to get the best deal and the quality of care is part of the decision just like either buying Sony or an off brand. You choose what they provide. If you don’t like it, don’t pay for it.

But this article is a twist of the procedure they use to make it look like it is the HMO that is creating the bills. Be responsible and read what you sign. Sometimes cost is not the only thing when you question the quality of care you determined for you.