Justice Dept. Winds Down Clinton-Related Inquiry Once Championed By Trump. It Found Nothing Of Consequence
MSN ^ | Devlin Barrett, Matt Zapotosky

A Justice Department inquiry launched more than two years ago to mollify conservatives clamoring for more investigations of Hillary Clinton has effectively ended with no tangible results, and current and former law enforcement officials said they never expected the effort to produce much of anything.

ohn Huber, the U.S. attorney in Utah, was tapped in November 2017 by then-Attorney General Jeff Sessions to look into concerns raised by President Trump and his allies in Congress that the FBI had not fully pursued cases of possible corruption at the Clinton Foundation and during Clinton’s time as secretary of state, when the U.S. government decided not to block the sale of a company called Uranium One.

As a part of his review, Huber examined documents and conferred with federal law enforcement officials in Little Rock who were handling a meandering probe into the Clinton Foundation, people familiar with the matter said. Current and former officials said that Huber has largely finished and found nothing worth pursuing — though the assignment has not formally ended and no official notice has been sent to the Justice Department or to lawmakers, these people said.

The effective conclusion of his investigation, with no criminal charges or other known impacts, is likely to roil some in the GOP who had hoped the prosecutor would vindicate their long-held suspicions about a political rival. Trump, though, has largely shifted his focus to a different federal prosecutor tapped to do a separate, special investigation: U.S. attorney in Connecticut John Durham, who Attorney General William P. Barr assigned last year to explore the origins of the FBI’s 2016 probe into possible coordination between the Trump campaign and Russia.

2 posted on 01/10/2020 5:56:49 AM PST by dsrtsage (Complexity is merely simplicity lacking imagination)
[ Post Reply | Private Reply | To 1 | View Replies]
To: Enlightened1
For an investigator to find anything of consequence, he must first undertake to look for a trail and follow the evidence wherever it leads.

In other words, there are none so blind as those who refuse to see.

Anyone, and I mean anyone that puts any trust in the DOJ, FBI, CONGRESS just name a few is a moron.

“””””””As a part of his review, Huber examined documents and conferred with federal law enforcement officials in Little Rock””””””””””””

He looked at some stuff. He talked to some of clintons friends at the FBI. Nothing to see, move along.

Just imagine if Secretary Pompeo set up a private server in his home and also set up a “charity” that received millions of dollars from foreign governments. You would never her the end of it.

Ok, So Huber decided Not to commit suicide. 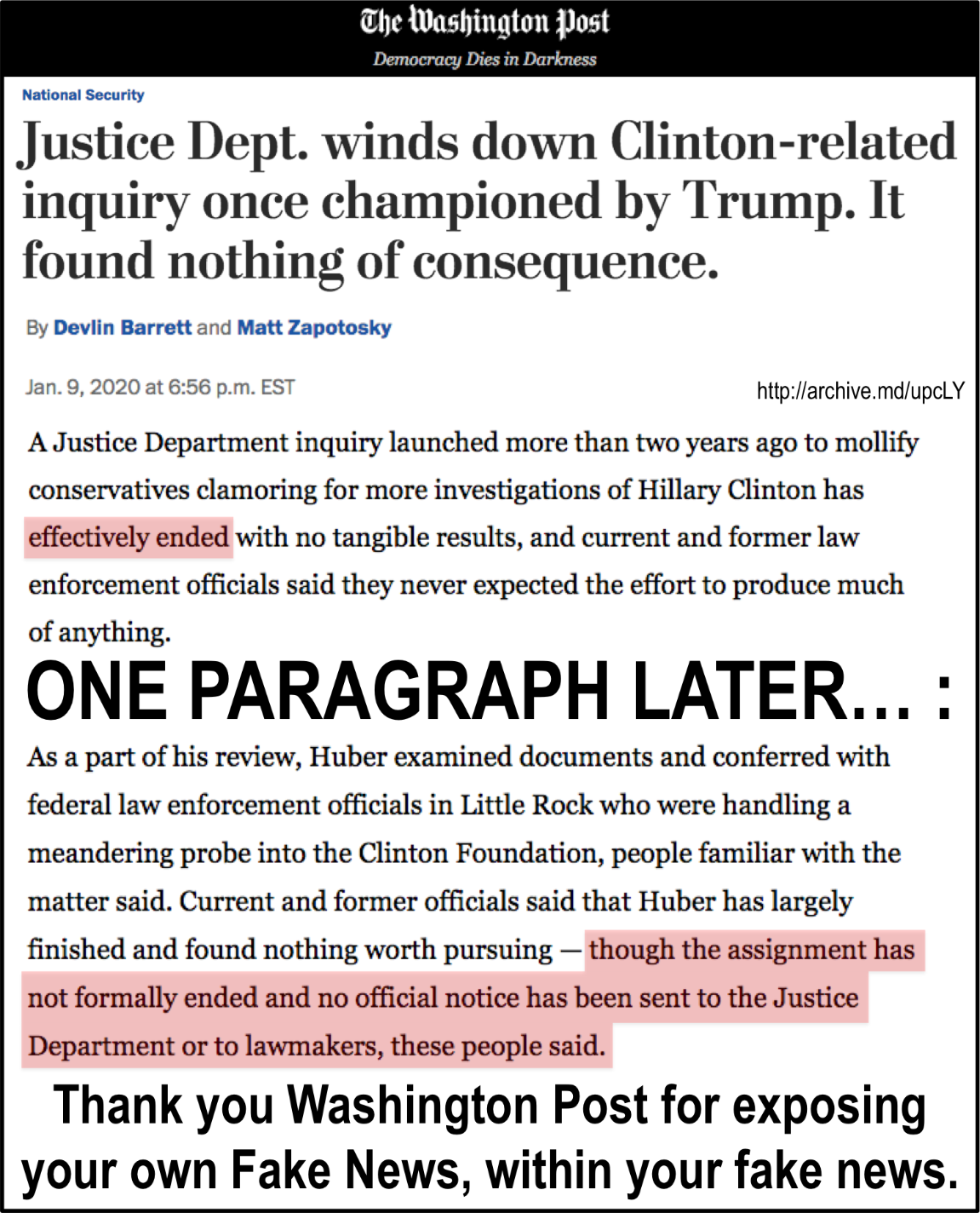 By covering for the PIAPS the DOJ gave cover for themselves.

Sessions gets credit for Huber’s cover up.

As to Barr...we’ll see. He’s done FAR MORE for Trump than he needed to - he could have simply acted like Sessions and there wouldn’t have been any price for it. But now the Dems are lawyered-up, so something is finally going on.

I’m starting to get new insights as to why our “National Motto” is “In God We Trust.”

So the fact that she destroyed phones and computers that were court ordered to retain, stored and sent classified emails on a non government computer, non government email address is nothing of consequence. What a joke. What they are not saying is the FBI gave her and her thugs and attorney immunity.

Or would you have found some extraordinary way of locking him up and making damn sure nothing happened to him? Like say, putting him in a high security military lockup with military guards, etc - Maybe even Gitmo?

Just a rhetorical question, of course...

But that's when I formed my opinion of Bill Barr. He's there to push it all out a little bit longer and run out the clock, but make it look like something's being done, all with a veneer of professionalism and competence.

Those who believe otherwise are being played.

I could have (and did) tell everyone this over a year ago when the Little Rock “sealed indictments” (or half of them) were unsealed, revealing 30 gun indictments with a major drug bust having just occurred. It was clear then the other 30 were drug related.

Yet the Q-tips kept talking about the “sealed indictments.”

The vast, vast majority of these are existing cases that are undergoing change of venue, change of plea, new charges, etc. The vast majority are NOT “new” indictments, let alone indictments related to some phantom Grand Jury that Durham has in Anchorage Alaska so the case “won’t be tried in DC.”

I’m not about to say that wasn’t pure corruption, I’m just pointing out that Barr inherited Huber. Maybe Barr will now be free to send a non-corrupt prosecutor to look into it, as he did with Durham...I’d give him a week or two at least.

I’ve said for years that the Clinton Foundation was a CIA front designed to launder money for foreign military operations outside the normal oversight of the U.S. government. There’s no way in hell the DOJ was ever going to open that can of worms.

Huber was appointed by Jeff Sessiions

The Clinton Foundation is a charity group
And Epstein killed himself

Hillary broke the law and mishandled classified information repeatedly but she may not have deliberately told them to strip the classified markings from documents. < /s >

Nope. My peak enthusiasm was the day he was hired to replace Sessions, and it has spiraled downward ever since, approaching Sessions territory.

James Comey did nothing illegal -

Hillary Clinton did nothing illegal

James Clapper did nothing illegal

Susan Rice did nothing illegal

Dochebag Brennan did nothing illegal

That's what I'm being told - just wow. Are more people signing on to my we need to hang these people initiative?

WTF President Trump this play the long game strategy has had real consequences and they aren't good. Unclassify the the FISA documents unclassify it all this is our country we want to see what they did even if you don't

Q tells us to keep trusting Sessions and Huber and the “thousands” of indictments waiting to drop...…

Sessions was Deep State or they got to him. It doesn’t matter which is true. He saved himself over doing what was right.

Huber was Deep State from the beginning.