Take heart, gaffetastic Joe Biden! If you do manage to stumble your way to the Democrat nomination, know that the liberal media will be there for you, spinning your every misstep into something positive!

Take the Washington Post's David Ignatius on today's Morning Joe. He was commenting on Biden's flip-flop on the question of whether he would comply with a Senate subpoena in an impeachment trial regarding his and son Hunter's activities on Ukraine. Biden went from flatly telling the Des Moines Register that he would not comply, to telling an audience, and later tweeting, that he, in fact, would comply.

Ignatius managed to turn Biden's transparent about-face for political reasons into a positive mark of his willingness to change positions as necessary, as compared to President Trump. 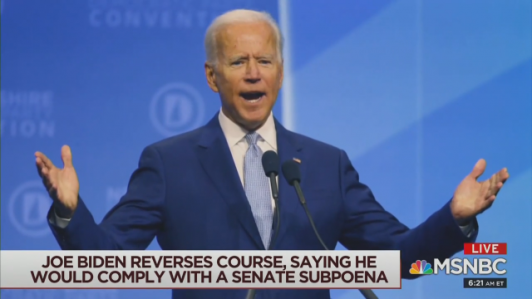 The liberal media can spin virtually anything a Democrat does into a positive!

If he complied, his only testimony would be “I don’t recall”.

But now he can still say, without being hypocritical (at that moment anyway), that the current POTUS is “Obstructing Congress” when he scoffs at the Dems’ fishing expeditions.

Search the web for “Biden Meme”

All the images returned will be of Biden and Obama, with Obama looking clever, and Joe clueless.

All the biden sniffing memes appear to be removed from search results. Confirmed on Bing and Goooooogle.

That’s how he’s being marketed now. Clueless, but at least harmless.

If I could pick one “journalist” to be indicted over spygate it would be Ignatius.

No meaningful questions would be asked of Biden, and “exoneration” would be the headline/talking point.

Use duckduckgo.com as your search engine. Crazy name but for now they seem to be the least biased one.

@IgnatiusPost Yeah - Biden’s flip-flop on responding to a subpoena is a positive compared to President Trump...and a crap sandwich is superior to a prime rib dinner too.....riiiiight?

Trump said BRING IT from the get go!-)

He'd be first on my list too. I'd love to have a sawbuck for every Deep State leaker that has his number on speed-dial.