IG Report Reveals After Steele Was Terminated For Speaking To Media, He Funnelled Claims Through John McCain To Comey
100 Percent Fed Up ^

The Hill reported about McCain’s arrogance in his memoir, and how he wrote that he “did what duty demanded I do” in passing on the documents.

“I discharged that obligation, and I would do it again. Anyone who doesn’t like it can go to hell,” McCain said, according to excerpts of the book published by The Guardian.

The IG report discloses that McCain gave five new Steele reports to Comey that the FBI did not previously possess, showing that McCain served as a conduit for Steele’s information to reach the FBI even after the British ex-spy was formally cut off as an FBI source.

It is not clear whether McCain knew at the time that Steele had previously been terminated as an FBI source for speaking to the media.

The IG report also verifies that a McCain aid obtained the Steele reports directly from Fusion GPS co-founder Glenn Simpson, meaning that when McCain transferred the anti-Trump charges to Comey he had to have known that the material originated with a firm that specializes in controversial opposition tactics. 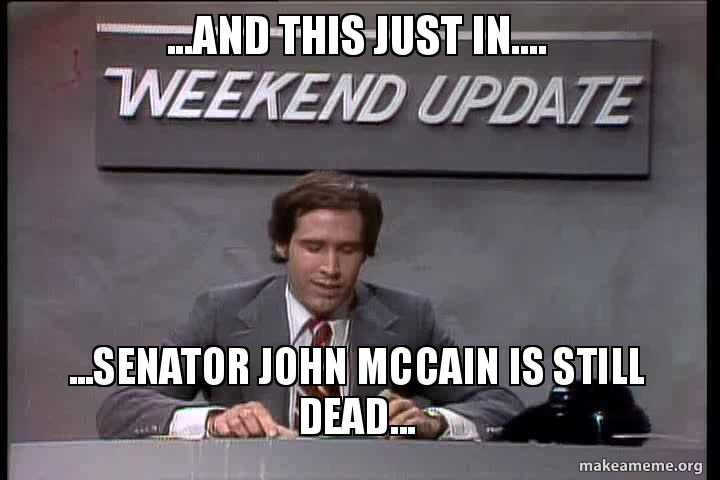 I hope Gary Sinise reads this.

It is amazing how these idiots are wrapping themselves in the flag. A local paper just had an editorial expressing how unpatriotic Trump voters are. Comey and Brennen are two others. This is something to watch closely. They are unhinged and have no clue how nutty they have become.

I’ve been reading about this for days. I was wondering why nobody had posted it here yet.

Lindas boyfriend was corrupt as hell.

“Anyone who doesn’t like it can go to hell,”

This is what happens when you sell your soul to the devil.
His family must be proud. He died a bitter miserable hate filled death. Good riddens...

He just wasn't the man his father and grandfather were.

They have no control of a military to turn on us.

They are losing politically on all fronts.

Do you think they are heading towards a violent coup?

And if so, with what military backing?

Just not sure what you meant. You may be 100 percent right that this is something to watch closely.

thanks ahead of time

So is Miss Lindsey...

This is already known and has been posted here before. IIRC this came out shortly after the election.

Ok. We won’t arrest him. Just those who are still alive.

It wasn’t known until now that McLame passed on five Steele memos that the FBI didn’t already have.

It also wasn’t known until now that McLame got his copies of the Steele reports directly from Glenn Simpson.

Of course he knew.

Say hello to Satan for me, John.