President Trump is holding a rally in Battle Creek, Michigan, on Wednesday, the day the House is voting on impeachment. The House is debating two articles of impeachment – one that accuses him of abuse of power over his dealings with Ukraine and another that says he obstructed Congress by defying subpoenas issued by the House in pursuit of its impeachment investigation.

Mr. Trump is the third president in U.S. history to face an impeachment vote by the House of Representatives. Two of the Democrats in the Michigan delegation who flipped seats held by Republicans in 2018 – congresswomen Elissa Slotkin and Haley Stevens – announced this week they'd vote "yes" on impeaching the president.

How to watch the Trump rally today

•Online stream: Various outlets that will listed in the thread 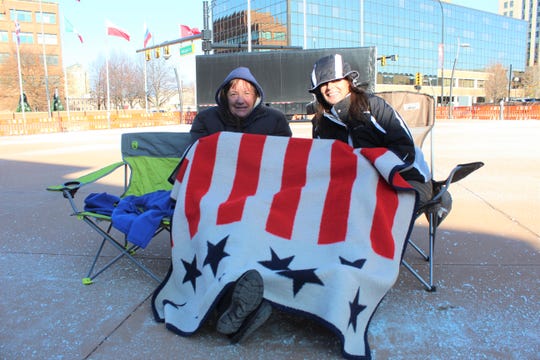 Kiczenski said the energy in the room at the rallies keeps her coming back.

"I've been to well over 250 concerts, and those aren't super exciting from start to finish because there's always downtime...but here, you're hearing firsthand all the real news of what's happening in the country."

Kiczenski said that she's learned about current events from Trump rallies, including news about the U.S.-Mexico-Canada Agreement, the U.S. moving its Israel embassy to Jerusalem, tax reform and the economy.

"If I'm not at the rally, or at least watching it on television, you don't even really know what's happening," she said.

In addition to learning about what's going on in the country, Kiczenski said she liked going to rallies because she was able to meet people from all over the country.

Kiczenski and Chiodo met at a Trump rally and became friends.

"We've been to a few events together, not all Donald Trump," Chiodo said. "I like the camaraderie, and I like the energy. It's nice."

"He's given me hope for our country," she said. "He's standing up to NATO and making all the countries that are involved in NATO pay their share — cough up some money. I love that... He's like that with a lot of things."

Chiodo was excited that the president was visiting Michigan again.

"I think he loves Michigan," she said. "He comes here a lot...He could get it over, you know, one and done, but instead, he's going to the smaller venue, and I think that's really great."

Chiodo and Kiczenski planned to spend Tuesday night in a tent or in their car. They're prepared with food and extra layers so they can stay warm.

The president has asked for prayers
Time to let him hear from us. Please encourage other to send their support in prayers AND to him at the WH

Stay warm you 2 good people, it will be a chilly night in Battle Creek.

In my state. This is awesome! Might have sent my husband as a Trump rally is on his bucket list, but the bathroom situation rules that out.

This rally will be a barn-burner.

The Trump rallies get better and better. God bless him.

“They’re prepared with food and extra layers so they can stay warm.”

I think it was 12-15 Deg last night there and windy as heck.

Did the Spanish Inquisition write this?

Yeah, they want to make this rally a big one, for that reason.

I think Trump is going to come out swinging hard.

The entire event will be a highlight! Capacity 10,000 seats. No telling how many will be standing outside.

Lake Michigan is going to make standing outside VERY uncomfortable. Kudos to the brave souls that do so.

I got to believe it is damn cold in Michigan tonight. Why is this not in a bigger venue?

Get him all wound up on the whole 'War Against Christmas' stuff to take his mind off Pelosi and her minions.