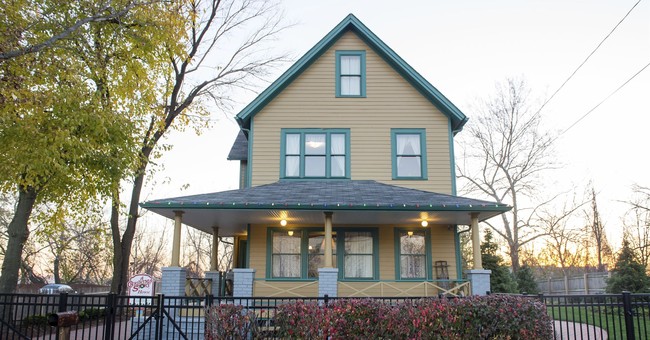 In the 36-years since Bob Clark’s A Christmas Story first appeared on the big screen, the movie has become as much a part of the Christmas season as Santa himself. More than just a charming holiday movie, A Christmas Story captures a time in America where kids could be kids; free to roam, daydream, tussle, and yes, even nearly lose an eye, without them (or their parents) being thrown into handcuffs or hauled in front of a family court magistrate. But no longer.

Today’s child-rearing environment, dominated by a combination of helicopter parents and overzealous nanny staters, allows no such freedom or independence for kids. From the earliest ages, today’s children are thrust into government-run schools where they’re put through horrific “school shooting drills.” They are told global warming will render the planet unhabitable by the time they reach adulthood. And, as for burning off this nervous energy? Not a chance. Recess, if not already eliminated, has dwindled in many school districts to just 15 minutes of rigidly structured time, with traditional games like tag and dodgeball banned for being “too mean.”

Of course, today’s snowflake culture does not get any easier for kids outside the school walls. Killjoy government officials have literally made trick-or-treating a crime for kids over a certain age, and similarly have outlawed throwing snowballs. Even make believe is potentially a criminal act in public. Recently, one Minnesota child was arrested and charged with disorderly conduct for his fantasy adventures in a park, when busybody citizens caused a stir online with irrational panic about a “masked predator.” The adult idiocy prompted police to investigate; and instead of dismissing the charges as a patently absurd reaction of adults to the imagination of a shy child, the judge gave him 10 hours of chores.

One must ask to what end this snowflake culture serves? Who are they protecting when playing in the woods results in an expensive and traumatizing legal mishap, or a snowball fight among friends can land kids in jail? The helicopter parents’ and nanny staters’ obsession with a one-size-fits-all prototype for how all children should act, is breaking children in order to fit them into this mold, and punishing them with adult-size penalties when they rebel.

Children today are suspended from school for making finger guns on the playground. In this environment, little Ralphie Parker’s boyhood fascination with the Red Ryder air rifle would not only have him expelled, but also pumped full of Adderall and enrolled in mandated counseling to work out his violent, “toxic masculinity.”

There is some small relief in seeing that some adults are raising the alarm about the extreme emotional trauma caused by this asinine behavior; questioning the long-term harm of mass shooting drills or telling kids the world is going to end if they don’t skip school to protest Republicans. But what about the rest of the rules, regulations, and processes designed to inhibit the natural behaviors of adolescence? Do these people really think there won’t be long-term consequences to this artificial, and largely politically motivated behavior manipulation? Or is that precisely their goal?

Confounding in stupidity as these examples may be, it is frightening to think they represent only those events actually making the news; meaning, they barely scratch the surface of a much broader and deeper social trend. And, while some of us may guffaw at the failures of parents, police and government officials in the anecdotal stories at hand, connecting the dots among them creates a disturbing picture of an American society losing its quintessential grit in favor of some warped utopia of adolescence in America. Aldous Huxley’s dystopian novel Brave New World seems to have arrived at last, 87 years after its publication.

Is it any wonder millennial adults today are utterly incapable of surviving in a workplace that does not offer them constant validation and safe spaces? In freeing them of any supposed emotional or physical “danger” during early adulthood and adolescence, they fail to develop natural defenses to challenges and unpleasantness that life presents to all of us. They are destined to go through life like Ralphie’s little brother, Randy; bundled from head to toe, and barely able to move with the layers of protection wrapped around them.

In today’s society, snowflakes would never allow the Parkers to survive. They would rather see Ralphie dragged to Drag Queen Story Hour than allowed to spend his time playfighting Black Bart in the back yard. Ralphie’s dad – whose prized possession was a ridiculous, schlocky lamp in the shape of a stocking-covered female leg – would find himself vilified by the #metoo movement and run out of town.

If produced according to today’s insipid snowflake criteria, A Christmas Story would be a complete bore; robbed of all the magic and joy that made it a timeless holiday staple. Which, come to think of it, is exactly what snowflakes are doing with real childhood.

That is one Christmas movie I never cared for.

One of my favorite holiday movies. I didn’t grow up in that era, but there were still some remnants of it when I was a child.

I’m the only person I know who actually saw that movie in the theatre.

I saw it twice at the theater! Was 8 at the time. Saw it with best friend then saw it a week later with the Cub Scout troop.

I was never a big fan of it either.

We live in semi rural MS, having moved from CA.

As I’ve mentioned before, on Halloween a group of six Kids showed up at the Door Trick or Treating. They aged from 6 to I guess 14.

The older Kid was dressed in Fatigues and had what I assumed at the moment was a Replica / Toy AR-15 Slung over his Shoulder. I looked closer and guess what, it was no toy.

It warmed my heart and gave me hope for America.

I like the movie. I think it is very witty and clever. It does a good job of depicting childhood in a different era. I have the movie on Blu-ray; however, I do not watch it every year and have not memorized all the lines.

It plays around Christmas on TV but, personally, I don't consider it a Christmas movie per se.

It is more of a vignettte of American life from a bygone era that is set during the Christmas season. Narrated by Jean Shepherd...he had a great many stories of this type he used to write and tell on many radio and TV shows.

I was in Okinawa when it came out. Had I been stateside I might have gone to it.

Ironic that kids today can’t ride a bicycle without a helmet, play on playground equipment least they injure themselves or have a fantasy that they are chasing pirates or desperados, but let them express the slightest perceived interest in being another sex and their parents will haul them off to “therapists” who will immediately conclude they are another gender inside. Loony parents will accept this nonsense and will push their kid into believing they are another sex and subject them to puberty blocking drugs and eventually mutilating surgery. In doing so they condemn their little snowflake to a miserable confused life, years of therapy, untold medical problems from the sex changing drugs and a high risk of suicide.

Agree it isn’t so much about Christmas as it is about life at that time. It’s too dark for what most want from a Christmas movie. I don’t much like it but there are some really funny moments.

I did not see it in the theater either. I don’t even remember it coming out. Back in those days I still had cable and a premium movie channel. And sometimes on a weekend night I would fall asleep on the living room floor watching something then wake up in the wee hours and turn the tube off and go to bed.

One weekend I did that except when I woke up this movie was playing. I had no idea what is was but was definitely taken by the charm of the film. Instead of going to bed I watched the rest then did a lot of research to figure out what the film WAS.

Finally did - and ended up recording it (on Beta - so now you know how long ago it was). Took it to our friends who had a tradition of watching movies on the holiday. It got mixed reviews. She liked it. He thought it was dumb.

Then funny thing. A few years later HE suggest we watch that exact movie. Evidently he decided it wasn’t dumb after all.

I always wanted a pair of the lamps featuring the stripper’s leg. Wife put kibosh on that.

Not my favorite Christmas movie, but I enjoy it once a year.

It was my life in a nutshell.

Bob Clark and his son were killed by an illegal in a car crash.