How paranoid were the Nixon-hating TV networks during Watergate? Far enough out there that, according to liberal former ABC correspondent Carole Simpson, they feared that instead of resigning, President Nixon would announce a military coup supporting him.

CAROLE SIMPSON: I have to tell you, though, on the night he gave the resignation speech, I was a baby reporter then. But they had me out in Chicago, we were in major cities across America waiting for the riots or whatever that's going to happen after his announcement because people weren't sure that he wasn't -- the camera wouldn't pull back on Nixon and he’d be surrounded by the Joint Chiefs of Staff, saying he’s going to take over the government. The networks were really thinking something like that may happen." 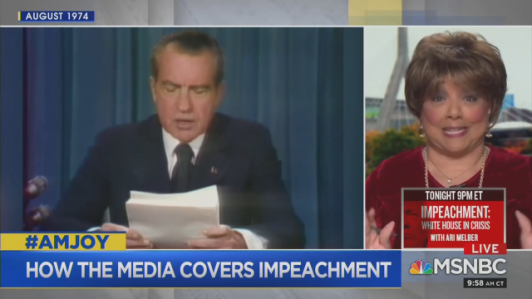 The MSM hated Nixon, and now they hate Trump.

I remember praying for a military coup during the Watergate bullsh*t. Nowadays, the military seems to be a part of the Deep State.

5 posted on 11/24/2019 11:36:47 AM PST by VietVet876
[ Post Reply | Private Reply | To 1 | View Replies]
To: governsleastgovernsbest
The MSM is hypocritical and complicit in the lawlessness that pervades America. They examine conservatives with a magnifying glass and bury the crimes of liberals.

I completely disregard anything and everything they have to say.

If the liberals ever succeed in destroying the conservative voice on the internet, I'll go back to simply ignoring all news.

7 posted on 11/24/2019 11:38:48 AM PST by rktman ( #My2ndAmend! ----- Enlisted in the Navy in '67 to protect folks rights to strip my rights. WTH?)
[ Post Reply | Private Reply | To 1 | View Replies]
To: governsleastgovernsbest
Sounds like they think they got this impeachment and removal thing in the bag, and the old bag Carole Simpleton is priming the pump for her fellow seditionists.

If the seditionists ever were successful, I would GUARANTEE that "sedition" against them would become a VERY SERIOUS CRIME.

Because that is what the pinkos in the so-called “news” media would want their hacks to do.

Not many donuts get by ol’ Carole...

The thing about attempting a coup is that you NEED public support for the action, and at the same time, the person in power has to have very low approval - otherwise civil war.

To put it another way, despite the BEST EFFORTS of the media to have our military remove Trump - not going to happen. Just more fake news.

Its no secret that the military was ordered to ignore all orders from Nixon I believe from midnight til the next day when he left and Ford was sworn in. It may have been unconstitutional but Schlesinger put it in play.

This is telling. It’s an admission that military tribunals regarding Spygate are a possibility, and the liberal media is simply getting the narrative out that Trump will use the military to stay in power.

There’s not going to be any military tribunals. They might throw the janitor at FBI headquarters under the bus but nobody else is going to prison.

Based on what credible evidence? I'm going to guess nada, zip, nothing but their hatred for the then President. Gosh does that ever sound familiar. I was just a kid when President Nixon resigned, had no inkling just how skewed the MSM could be.

Fretted Simpson: ... his approval ratings have gone up, support have done up, despite what we heard in two weeks of public hearings. So I don't know what's going on with the American people...

...the fact that most people are getting their news from Fox, and they believe Trump and Fox tell the truth, and the rest of us are enemies of the people.

Ding ding ding, we have a winner! The only thing she got wrong is that it is *all* people getting their news are getting it from Fox. If you're not watching/reading Fox News, you're not getting news, you're getting leftist propaganda.

And it scares me that if people are just watching Fox, they have a completely skewed idea of what it is happening here. So it is very scary.

It should be scary to all un-American, anti-American leftists. We're not swallowing your BS, not going to let you take control. What you see as "skewed" is actually reasonably well balanced reporting. It only appears skewed because you are so far out to the left you can't even see the middle from there anymore.

Reminds me of the whole “Obama is going to declare martial law so he can be president forever” garbage floating around the internet. That slug couldn’t get out of there fast enough, he was all about polishing his resume to get in the front office of a “non-profit” (a la Jimmuh Carter and Hitlery) or U.N. where the scam money really rolls in.

Oh yeah. I’m trying to remember which of Nixon’s lieutenants told the Joint Chiefs, “The president is depressed and drinking heavily. If something militarily significant happens, call me.” I don’t consider that terribly out of line. During Vietnam, he was talking wild stuff including nuclear weapons to convince the Russians and others that he was crazy. It worked, better than he hoped even.