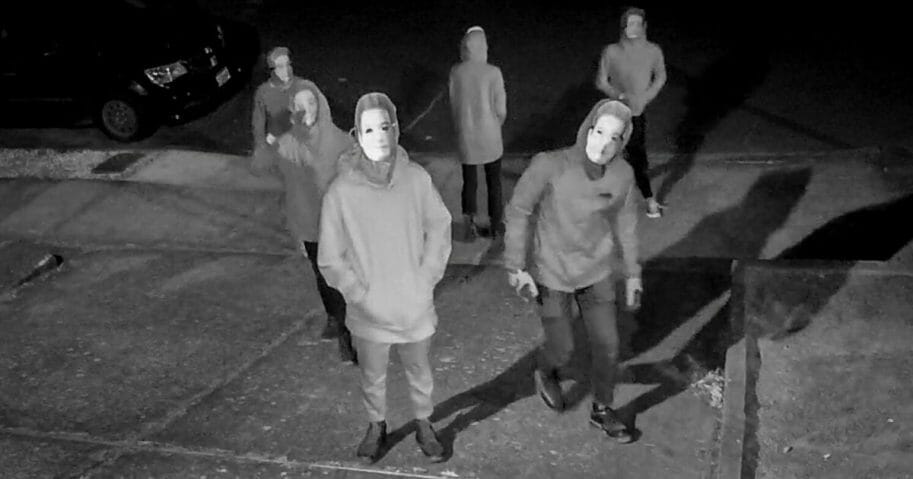 It's dangerous to be conservative in modern America.

From raging leftists intent on causing physical harm to cowards who prefer to dox and harass online, there's no shortage of liberals acting out against the political right.

Now, they're even turning to shamelessly menacing the families of conservatives.

The family of conservative journalist Andy Ngo discovered this firsthand after a creepy encounter on Halloween night. According to Ngo, the group of six approached his family's house wearing makeshift masks of his face.

These 6 individuals wearing print-out masks of my face approached my family's home last night, repeatedly rang doorbell, pounded on window, recorded footage of property & gestured at cameras. There were no candy bags. This follows their doxing of my elderly mom's small business. pic.twitter.com/dH8qn1YS85

Video footage shows the group banging on the door before heading into the yard and glaring at the security camera.

The group all appeared to be wearing gloves, masks and heavy clothes, making identification virtually impossible.

Ngo is a frequent target of the radical left over his raw coverage of Antifa. He often plants himself in or near violent protests, broadcasting the action to his Twitter followers.

He was assaulted at one event, an encounter that left him in the hospital.

According to Ngo, leftists also targeted his elderly mom's business.

The rise in the radical left appears to be tied to Democrats' push to get rid of President Donald Trump and undo the outcome of the 2016 election.

Trump and his followers, who are often categorized as

Reminds me of another Democrat thug practice. KKK.

Perhaps a recorded audio message of the homeowner’s castle doctrine rights should be played at a time like this.

Yes it does. Only the types and colors of the hoods have changed.

Maybe he will tell them “Get off my lawn...”

That’s why they don’t go inside. They know better.

Castle doctrine doesn’t give you the right to shoot trolls.

They’re actually don’t you a favor, of sorts.
If you had a real enemy that was a real threat, you’d never know they were coming.

And the screams from the so called Social Justice press are happening when.....?

Grandpa sez, “heat em up wif dat der rock salt and I’m a bettin thez’ll get to runnin’ but fast. “ .

They were on his property and they were pounding on his door and doorbell.

20 gauge would take care of that... perceived threat on life and property.

Identify the stalkers and get a police file started.

The Klan burning a cross in your yard was considered sufficient threat. Intent here is the same.

Confront them in your yard.

Carry your shotgun for protection.

Hope somebody throws a rock or charges.

Legal in the entire US.

If this is in Portland, the cops and the rest of the power structure couldn't give two sh*ts about ANTIFA's threats to Americans'

“...Video footage shows the group banging on the door...”

I’d open the door and the shotgun barrel they would be looking at would look like a rain pipe to them.

From the days of the KKK to today!