Rep. Adam Schiff is a poor man’s Harry Houdini. He is a cheap illusionist performing amateurish parlor tricks of deception in his quest to convince his audience that he possesses damning evidence of an impeachable offense committed by President Trump.

Schiff, D-Calif., has no such evidence, of course. But like most illusionists, Schiff employs misdirection and confusion. He attempts to convince you that opinions are evidence, while facts are not. This is the stuff of rank political magic where perceptions are distorted through clever manipulation of the process.

Schiff has become the master manipulator aided, in large part, by the secrecy of his faux magic act. He won’t allow you to peek behind the curtain to see for yourself the witnesses he has called in his “super top secret” impeachment inquisition. You are never permitted to view transcripts of depositions or examine testimony that purports to incriminate the president. That, of course, would ruin all the hocus-pocus.

TOPICS: News/Current Events
KEYWORDS: coup; greggjarrett; impeachment; poormanshoudini; schiff; shampeachment; shiit; trump Navigation: use the links below to view more comments.
first 1-20, 21-39 next last
1 posted on 10/30/2019 4:56:35 AM PDT by knighthawk
[ Post Reply | Private Reply | View Replies]
To: All
CATHERINE HERRDGE: Ukranian-born Colonel Vindman may have broken the law by leaking the president’s Ukraine call......
Vindman took classified presidential transcripts and shared them with others. Adam Schiff shut down Jim Jordan
when Jordan asked who Vindman shared them with? Is Adam Schiff a defense attorney or a member of Congress?

Catherine Herridge: “One thing that caught my attention is that Vindman said he shared it with people who were relevant and who had sort of a need to know and proper security clearance .......but presidential phone calls are highly classified and if they’re shared with people who don’t have a need to know, that would be a potential violation of the leaking statute that is 18 USC 798.

So that it was instructive when Schiff repeatedly trampled on that line of questioning including who Vindman talked to after the July 25th phone call.”

Schiff definitely has a mental disorder.

3 posted on 10/30/2019 4:58:54 AM PDT by From The Deer Stand
[ Post Reply | Private Reply | To 1 | View Replies]
To: knighthawk
You are never permitted to view transcripts of depositions or examine testimony that purports to incriminate the president. That, of course, would ruin all the hocus-pocus.

Funny how nothing has been "leaked" from all this.

4 posted on 10/30/2019 5:00:23 AM PDT by Texas Eagle (If it wasn't for double-standards, Liberals would be have no standards at all -- Texas Eagle)
[ Post Reply | Private Reply | To 1 | View Replies]
To: knighthawk
Adam Schiff’s drive to impeach Trump based on opinions, deception and illusions... and sedition
5 posted on 10/30/2019 5:00:32 AM PDT by Carl Vehse
[ Post Reply | Private Reply | To 1 | View Replies]
To: All
AND THIS----TRUMP HAD FIGURED IT OUT: when word got out that Trump was checking on the Bidens activities in Ukraine, wanting accountability for US tax dollars, the swamp went code red! Trump was figuring it out----the US tax dollars blanketing the Ukraine was a DNC slush fund, circling around from the US Treasury, to Ukraine and back into DEM coffers.

<><> eager for new sexual conquests, Hunter Biden got going as the bag man,
<><> Burisma was the laundry,
<><> US tax dollars were funneled back to Joe and Obama.

Trump figured it out, ergo impeachment was launched to protect their dirty deeds.

TALKING POINTS---
<><>Col Vindman admitted he shared the read-outs of President Trump’s call Ukrainian President Zelenzky with several others.
<><> Vindman said the people sharing were relevant, had some sort of "need to know" and had proper security clearance.
<><> this matters b/c presidential phone calls are highly classified.
<><> if a subordinate shared with people without a "need to know" that would be a potential violation of law.
<><> Vindman's leaking may have violated US Code statute 18 USC 798.
<><> At the hearing Chairman Schiff repeatedly shut down lines of questioning including who Vindman talked to after the July 25th phone call.

6 posted on 10/30/2019 5:01:03 AM PDT by Liz ( Our side has 8 trillion bullets; the other side doesn't know which bathroom to use.)
[ Post Reply | Private Reply | To 1 | View Replies]
To: knighthawk
The FACT is, the Ukraine got their money AND Ukraine was reminded of the Treaty between the US and Ukraine to work together on corruption.

I'm sure Biden wish he never bragged about holding up a billion dollars unless the prosecutor got fired. 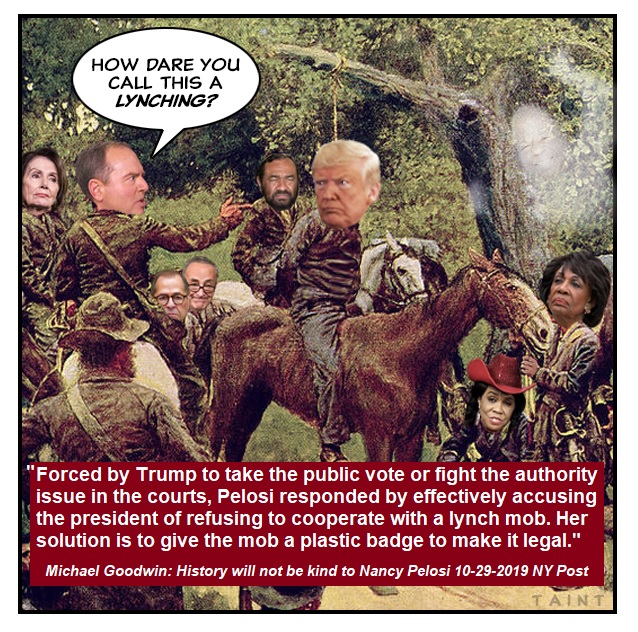 I’m convinced Biden was so flippant in those videotaped remarks because at that time he never intended to run for President.

And I’m betting his son (with $$$ signs in his eyes) was the one who convinced Joe to run.

That, and because he’s an arrogant POS.

The GOP doesn’t know how to fight. Schiff should have long since been arrested for sedition and be spending his days trying to defend himself from a DOJ that is aggressively defending America. Oh well.

Let’s hope the full House votes to stop this charade. I want to believe that even demonrats aren’t that stupid.

The only defense that will keep Trump in office (and out of prison) is, “You’re goddam right I ordered the code red”. He did it, he was right to do it, it was well within the scope of his powers to do it, and the Senate would be reckless to remove him for it.

Although we must obey the law we can wonder.

Why is the head Kangaroo still alive?

Not a chance or Nancy would never bring it to a vote. The House is in enemy hands and the Dems are prepared to burn down the country in their lust for power and control. They are going to push this until it becomes kill or be killed.

His new book is great too

The Bidens remind me of the movie Grifters.

Serious question, why hasn’t the FBI raided Vindman’s home and office for evidence of sedition?