Ted Cruz took issue with Trump's call with Ukraine's president, but he expected it to be worse
The Eagle ^ | Sep 28, 2019 Updated 3 min ago | Abby Livingston

While U.S. Sen. Ted Cruz expressed unhappiness Saturday with some of Donald Trump's comments related to the president's call with Ukraine's leader, the Texas Republican emphatically pushed back against the Democratic movement to impeach the commander in chief.

Cruz said that he had read both the recently released whistleblower complaint and the readout of Trump's July phone call with Ukrainian President Volodymyr Zelensky, both of which characterize Trump as soliciting the Ukrainian government's assistance in investigating unsubstantiated allegations against the business activities of former Vice President Joe Biden's son, Hunter Biden.

"I expected it to be" worse than it was, Cruz said of the phone call summary. He made the remarks in a Texas Tribune Festival interview with MSNBC Host Chris Hayes.

But, he said, he found the president's comments on Biden to be troubling. On the call with Zelensky, Trump said there was talk that Biden had called for the firing of a Ukrainian prosecutor who was investigating his son.

"I would have wished the president have not gone down that road," Cruz said.

"Donald Trump says things frequently that I wish he wouldn't say," he elaborated. "I don't have control over that. The fact that he shouldn't have gone down that road is a long way from saying, 'Therefore, he should be impeached and forcibly removed from office after the American people have voted in a presidential election.' 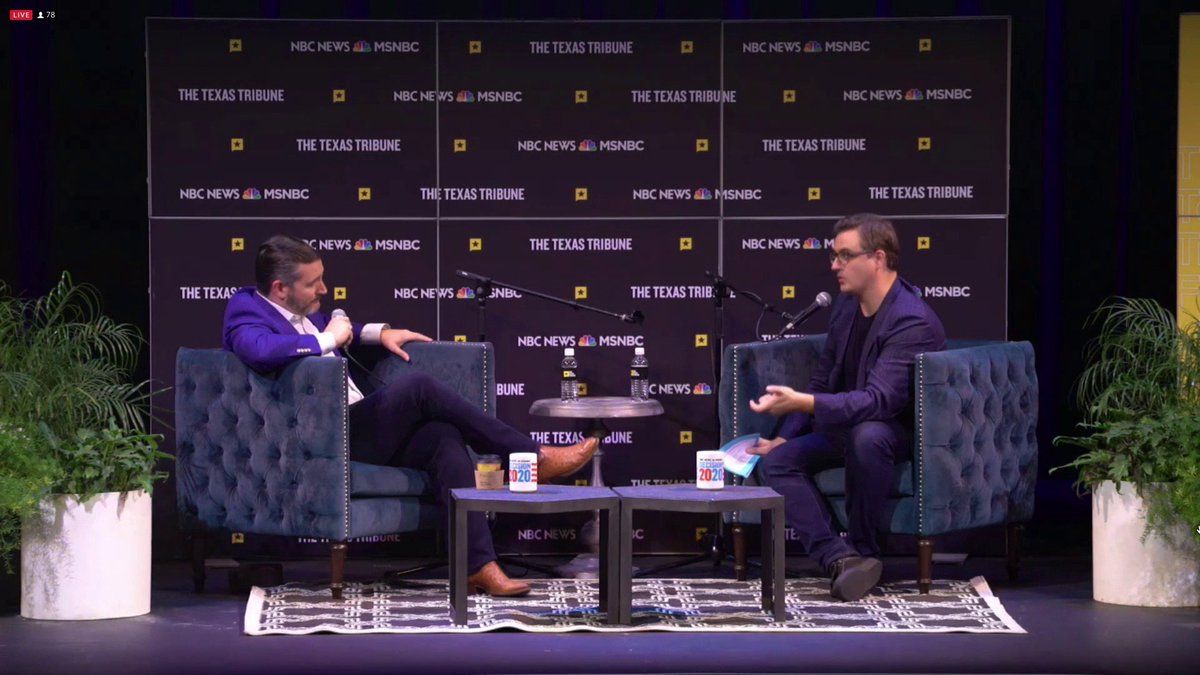 McCain never shut up either.
You are loosing support Ted.

Politicians are worried that Trump’s investigation will start a trend of going after kick back /graft and nepotism...the life blood of DC.

That's one of things Ted Cruz says frequently that I wish he wouldn't say.

The top of a fence post ain’t a very big dance floor.

Ted is a dufus who needs to keep his yap shut unless he is all in defending the President.

7 posted on 09/28/2019 3:18:36 PM PDT by madison10
[ Post Reply | Private Reply | To 1 | View Replies]
To: conservative98
Basically, any criminal behavior by a Democrat becomes a partisan matter if any Republican tries to investigate it.

Criminal behavior by a Democrat that involves a foreign government cannot be investigated by any Republican because that will be "involving a foreign power in our electoral process," a gigantic crime.

Well, many of us agree that Trump should say those things. That’s why he is President and you are not Ted.

It would be much worse for you Ted had Trump not campaigned for
your Senate seat.

This was just Ted being the exact same Ted that he always is.

Cruz nearly lost to O’Dork in a red state.

I hope the state where I spent 6 years of my youth and where I still have two sisters, 3 nephews, 3 nieces, can bring forth a real conservative that can replace Cruz and beat any opponent like O’Dork by 30+ points.

Cruz is a Canadian Crony.
He needs to go back home.

This guy never fails to live down to the low standards he set when he backed the scum that attacked Trump supporters in Chicago in 2016.

He’s weak & less intelligent than I thought he was. If this guy is Trump’s backup in the Senate than we have troubling brewing if they indeed impeach Trump in the House.

Just when I was once again starting to appreciate Ted Cruz, he once again makes my support of him wane. There was absolutely nothing wrong with what President Trump said, and Zelensky was the first to mention Biden’s name.

Cruz is 99 percent better than the opponent he beat, the drunken billionaire Patrick O’Rourke. What I will say is I view this as Trump taking a chance - Biden was on camera, bragging that he shut down the prosecution of his no-account son Hunter. The media showed NO interest and even though several of them don’t seem to even know what he did, they are defending him. Trump pushed this issue into the limelight where it never would have appeared and I would bet 10-1 he knocked the “moderate” Biden out of the race as an opponent.

Why, Ted? You are an extremely articulate man but you can't say why!?

This is cruz trying to make “Trump did something wrong” an accepted assertion. It’s not a far step from there to say it’s impeachable. ted will get there, that POS!

I considered Cruz my first choice in 2016. I would never ever vote for him again

Cruz is ok but we can’t have a Cubanadian as our President.