Expert Breaks Down for AOC Why We Have The Electoral College
Townhall.com ^ | August 22, 2019 | Timothy Meads

New York Democratic Representative Alexandria Ocasio-Cortez recently trashed the electoral college on her Instagram Live, saying that the system used to determine the president of the United States every four years is racist and disproportionately advantageous for white people. Tara Ross, author of Regnery's The Indispensable Electoral College: How the Founders’ Plan Saves Our Country from Mob Rule, broke down for Townhall just why AOC is so misinformed.

"We’re coming to you live from the Electoral College," Ocasio-Cortez said, showing largely empty farmland. "Many votes here, as you can see. Very efficient way to choose leadership of the country. I mean I can’t think of any other way, can you?"

"The Electoral College has a racial injustice breakdown," Ocasio-Cortez added. "Due to severe racial disparities in certain states, the Electoral College effectively weighs white voters over voters of color, as opposed to a 'one person, one vote' system where all our votes are counted equally."

""#FactsAreFacts, America. The Electoral College has got to go," the Democratic Socialist remarked.

Ross told Townhall that AOC fundamentally misunderstands the purpose of the electoral college and fails to see why it is necessary.

"Her arguments are at odds with those made by civil rights leaders such as Vernon Jordan in the late 1970s," Ross said in an email.

"'Take away the electoral college,' Mr. Jordan wrote at the time, 'and the importance of that black vote melts away. Blacks, instead of being crucial to victory in major states, simply become ten percent of the total electorate, with reduced impact,'" the retired attorney told me.

But, Ross said that ultimately comments like AOC's are simply about "changing the narrative." In fact, she said critics of the system are "working overtime" to revise history.

"If these activists can paint a picture of the Electoral College as something racist and evil, then it will be far easier to eliminate the system," Ross surmised.

The antidote to this malady is simply better education of actual American history.

"Americans would be better served to remember the real history of the Electoral College: The institution was created because the Founders knew the dangers of simple democracies. Two wolves and a sheep voting on what’s for dinner is not just. Instead, the Founders created a system of checks and balances, including our Electoral College," Ross said.

As for the idea that since more people live in cities, therefore, rural areas should have less of a say, Ross rejected this claim.

"A handful of densely populated urban areas should not be able to gang up on everyone else. Every voice matters. Every voice should be heard."

Furthermore, what these leftists fail to understand is that demographics and population change in states. "There is no such thing as a permanently safe or swing state. States change their allegiances fairly often, which is why California voted for George H.W. Bush in 1988, but also voted for Bill Clinton in 1992," she noted.

Ross also said AOC would be wise to remember that the electoral college "isn’t looking to skin color any more than it is looking to religion, industry, or proximity to the border."

"The purpose of our state-by-state presidential election process is simply to ensure that voters from a variety or regions, states, and subcultures are taken into account at election time," Ross said. "The truth is that the Electoral College helps all Americans, no matter their skin color. It does this by rewarding presidential candidates who do the best job of taking into account the needs of a wide variety of voters."

So then what should critics like AOC be doing instead? Ross said presidential candidates need to create better platforms that appeal to both rural and urban voters in order to overcome any perceived disadvantages.

"We’ve had close elections lately because neither political party is doing an especially good job of coalition building. The first party to rectify this problem will also start winning presidential elections in landslides," she added.

She’s too damned stupid to realize that a representative republic, in our case a critical element of which is the electoral college, is more “democratic” than a direct democracy.

She’s not against the Electoral College. In fact, she applied to it and never received a response, so she went to BU.

“As for the idea that since more people live in cities, therefore, rural areas should have less of a say, Ross rejected this claim. “

They know what they are doing. Eliminate it, and five corrupt cities will rule the world.

Excellent article about the purpose of the Electoral College. 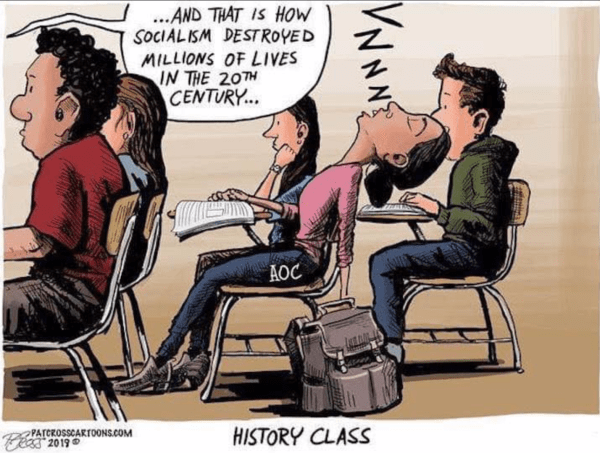 The biggest problem the country is having is those uppity white people!

They should sit in the back and have their own water fountains.

At least AOC is smart enough to not show up for either one....

(H/T Blood of Tyrants) There is nothing in the Constitution that says the "people select the president."

"People vote to select electors" who promise to vote for a certain candidate.

“”Ross told Townhall that AOC fundamentally misunderstands the purpose of the electoral college and fails to see why it is necessary.””

Why stop there - that’s the way she sees and understands everything she decides to pontificate on.

What’s with the glasses? She needs them to look smart?

Send her the Rush Revere books. They might be right on her reading level.

“”If these activists can paint a picture of the Electoral College as something racist and evil, then it will be far easier to eliminate the system,” Ross surmised.””

“”If they can’t bring the subject around to color and race, they’d have to stand on their merits and they have none.””

Not precisely his quote but fits the bill perfectly and close!

16 posted on 08/22/2019 9:57:53 AM PDT by Thank You Rush
[ Post Reply | Private Reply | To 1 | View Replies]
To: Kaslin
Ross told Townhall that AOC fundamentally misunderstands the purpose of the electoral college and fails to see why it is necessary.

NO, SHE DOESN'T. It's because she DOES understand it, and how it helps prevent the tyranny she seeks to impose, that she wants it abolished.

The Left is evil but it's not stupid.

this just shows how intellectually bankrupt racism arguments have become. To put it another way, if you take something that is dark and ugly, then try to spread it out, guess what happens? It becomes diluted and ineffectual.

Instead of arguing about racism, try slavery. Only problem is that you end up with the conservatives because liberty is the antidote to slavery - and, oh yeah, education as in knowing what you are talking about.

The State is the building block of our Republic. The separate sovereign states elected the President, whether there were 13 states or 48 or 50. We have never been an raw Democracy with mob rule, nor were the people ever intended to vote for president directly. The entire reason for the electoral college is to weaken the ability of large states to dominate small states.

But I like how the person in the article framed it. Well done.

Why anyone with an IQ over 80 would listen to this ignorant young do-nothing is beyond me.

Her handlers should be investigated, though. I’m sure there’s a Soros wanna be somewhere back there..