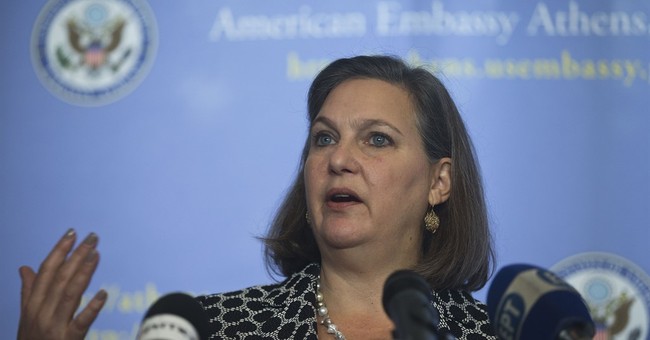 The documents were obtained through a Freedom of Information Act lawsuit after requests for communications about the dossier were ignored by State Department officials. They show direct conversations between Fusion GPS' Glenn Simpson, Winer and Nuland about getting together for a meeting about a "Russia related issue."

From Hoyer's office, Daniel Silverberg praised Nuland's work on the issue and called her a "warrior."

"It was a delight to speak today, notwithstanding the context. You've been a warrior on these issues, and I look forward to speaking further to preserve and wherever possible strengthen the important work you have done. I’ll follow up regarding a possible working group meeting," Silverberg wrote to Nuland on November 28, 2016.

As a reminder, former Obama Deputy Assistant Secretary of Defense Evelyn Farkas admitted the Defense Department rushed to gather as much information as possible about the Trump campaign after President Trump won the 2016 election.

"I was urging my former colleagues and frankly speaking the people on the Hill, it was more actually aimed at telling the Hill people, get as much information as you can, get as much intelligence as you can, before President Obama leaves the administration,” Farkas said during an interview with MSNBC in 2017.

As the layers continue to be pulled back, the more we find out about how comprehensive the effort to take down the Trump presidency with claims of "Russia" really was and that it extended to multiple government agencies.

"These documents further confirm the Obama State Department was obviously a way station for Steele’s smear dossier and other anti-Trump activism,” Judicial Watch President Tom Fitton said in a statement.

Meanwhile, the Department of Justice Inspector General is investigating the origins of the Russia investigation in addition to a U.S. Attorney appointed by Attorney General Bill Barr.

As the worm turns...

I hear the sound of cockroaches scattering in the light of truth.....get ready.

Getting closer!
But it feels like being trapped in Zeno’s walk.

Each step dividing the remaining distance by half!

Yes, I know the solution with a simple continued fraction.

But the end is still out of sight???

I CANNOT WAIT!
JUST HANG A FEW OF THE SOBs NOW!

There is your collusion.

Not surprising.... seems like Obunghole started sharing info across multiple agencies around that time.

FReepers, 96.173% of the Second Quarter FReep-a-thon goal has been met.  Click above and pencil in your donation now.  Please folks, lets end this FReepathon.  Thank you!
...this is a general all-purpose message, and should not be seen as targeting any individual I am responding to...

There never should have been an Obama administration.

Obama is not a natural born citizen.

Now we have a really good case study as to why the founders were right to exclude those born with multiple citizenships and people still want the Constitution violated. smh....

I’m wondering if Nuland got a bonus of $25,000. If Steny Hoyer is involved I’m telling Nancy Pelosi is involved. Is there anyone in the government who wasn’t involved?

She tries the old switcheroo with an itinerary and then a comment regarding Jerusalem.

Ah, the New World Order planning on division of Jerusalem - it was always the plan. Going way back, GHWB’s administration opposed Israeli settlements in “East Jerusalem”.

[There is your collusion.]

Some would call it a “coup attempt”.

And her relationship to Cankles?

ASSISTANT Sec of State but not a word mentioned about her boss Horse face John Kerry ???

“Not surprising.... seems like Obunghole started sharing info across multiple agencies around that time.”

He’s not going to avoid this by calling racism. That ship has sailed.

Victora Nuland, in that video, reminds me of another great speech by a State Department spokesperson:

So this high level State Dept hack was coordinating the dossier info with Hoyer’s office?

So Hoyer knew about the plan to destroy Trump, so Pelosi knew, and likely the entire House Dem caucus knew.

And they leak like sieves so the media was in on it also to push the narrative.

Which explains the fear, and possibly the energy to get control of Congress to bury it.

It would not surprise me at all if we learned that Paul Ryan and other "retirements" were the equivalent of a champion boxer "taking a fall" to clear the road for a Democrat takeover of the House.

The fact that an old creep like Steny may go down is a bonus.