Big League Politics can confirm that several wealthy benefactors are attempting to contact Shawn Brooks, the user who uploaded the viral Nancy Pelosi meme in which she appeared even less coherent than usual, to help him sue Daily Beast, CNN, Facebook, and others involved in his recent doxxing as he announces his legal defense fund on GoFundMe.

Brooks was doxxed by Daily Beast writer and former black hat hacker Kevin Poulsen after he uploaded the viral clip of House Speaker Nancy Pelosi appearing to stammer and slur her words more than usual.

Poulsen apparently colluded with Facebook to dox Brooks, a story that was picked up and repeated by CNN.

Reports initially indicated Poulsen also created the viral meme, but Brooks denies this. Brooks also denied he is the user who posted the video to his Facebook pages, though Poulsen, quoting Facebook, claims Brooks used a sock puppet account to post it.

It was rumored that wealthy benefactors with significant experience in legal matters regarding the mainstream media and social media were seeking to help Brooks sue early this morning, and now Big League Politics can report that one such benefactor has independently contacted our senior reporter, Peter D’Abrosca, to confirm they are actively attempting to contact Brooks to provide financial and legal support. 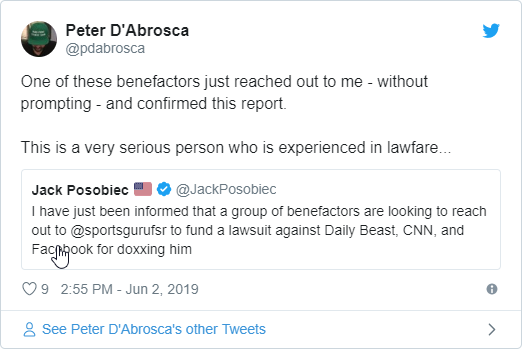 Does anybody have the Real tape? Because stammering was not the only problem with Nancy’s speech on the allegedly “altered” tape.

But it was okay to portray Trump as ‘orange face’ including what’s his name - Beck shoving his face in a bowl of Doritos or something.

Black slaves who flee the Democrat Plantation must always be punished severely, to serve as an example to others that might be thinking of doing the same.

This needs to happen - it’s the only thing liberals will respond to.

I went to Blackhat a couple years ago.
I figured it would be a mix of both political leanings.
Shocking nearly ALL were hard core lefties.

No more 40 oz and a marlborough for him!

The US citizen who was doxxed became a Republican because he was mad that illegal aliens were undercutting his work, resulting in him being let go.

In short, he opened his eyes to the evils of the open-borders Democrat party.

I’m not going to report your post, but you should consider reporting yourself and asking for the mods to delete it.

11 posted on 06/02/2019 2:12:55 PM PDT by Jewbacca (The residents of Iroquois territory may not determine whether Jews may live in Jerusalem)
[ Post Reply | Private Reply | To 10 | View Replies]
To: AdmSmith; AnonymousConservative; Arthur Wildfire! March; Berosus; Bockscar; cardinal4; ColdOne; ...
12 posted on 06/02/2019 2:30:13 PM PDT by SunkenCiv (Imagine an imaginary menagerie manager imagining managing an imaginary menagerie.)
[ Post Reply | Private Reply | View Replies]
To: E. Pluribus Unum
Reports initially indicated Poulsen also created the viral meme, but Brooks denies this. Brooks also denied he is the user who posted the video to his Facebook pages, though Poulsen, quoting Facebook, claims Brooks used a sock puppet account to post it. After reading this, I have no idea what actually was done by whom. I guess editing for clarity is so passé now.
13 posted on 06/02/2019 2:47:55 PM PDT by exDemMom (Current visual of the hole the US continues to dig itself into: http://www.usdebtclock.org/)
[ Post Reply | Private Reply | To 1 | View Replies]
To: Zathras

Lefties are about power and control. Period. The want excessive government and to be an integral and key part of it (data harvesting, sharing, control). Their ‘concerns’ for ‘victims’ is only to sucker those ‘victims’.

Definitely not written for the pubic. Dox? Short for several MDs. Someone is helping someone legally.

Nicely written and edited I guess.

My entire internet existence is a sock puppet.

18 posted on 06/02/2019 3:35:21 PM PDT by Rebelbase
[ Post Reply | Private Reply | To 1 | View Replies]
To: whistleduck
Definitely not written for the pubic. Dox? Short for several MDs. Someone is helping someone legally. Nicely written and edited I guess.

Anytime you encounter a word that you are unfamiliar with pretend that it's not your ignorance but somebody else's. It will serve you well.