A stash of disturbing and borderline illegal pornographic images were found in Michael Jackson's Neverland ranch before his death.

The Thriller singer, who 10 years after his death from a drug overdose faces fresh claims of sexual abuse and assault against underage boys, collected grim images of nude and partially clothed teenagers at his vast home.

Allegations made against him in the Channel 4 documentary Leaving Neverland focus on two of his alleged victims - Wade Robson and James Safechuck - who say Jackson groomed, molested and preyed upon them.

Now questions are being asked again about the materials found inside Jackson's home during a raid in November 2003.

Duh. If he were not a kazillionaire and a popular social icon he would have been thrown in jail decades ago. 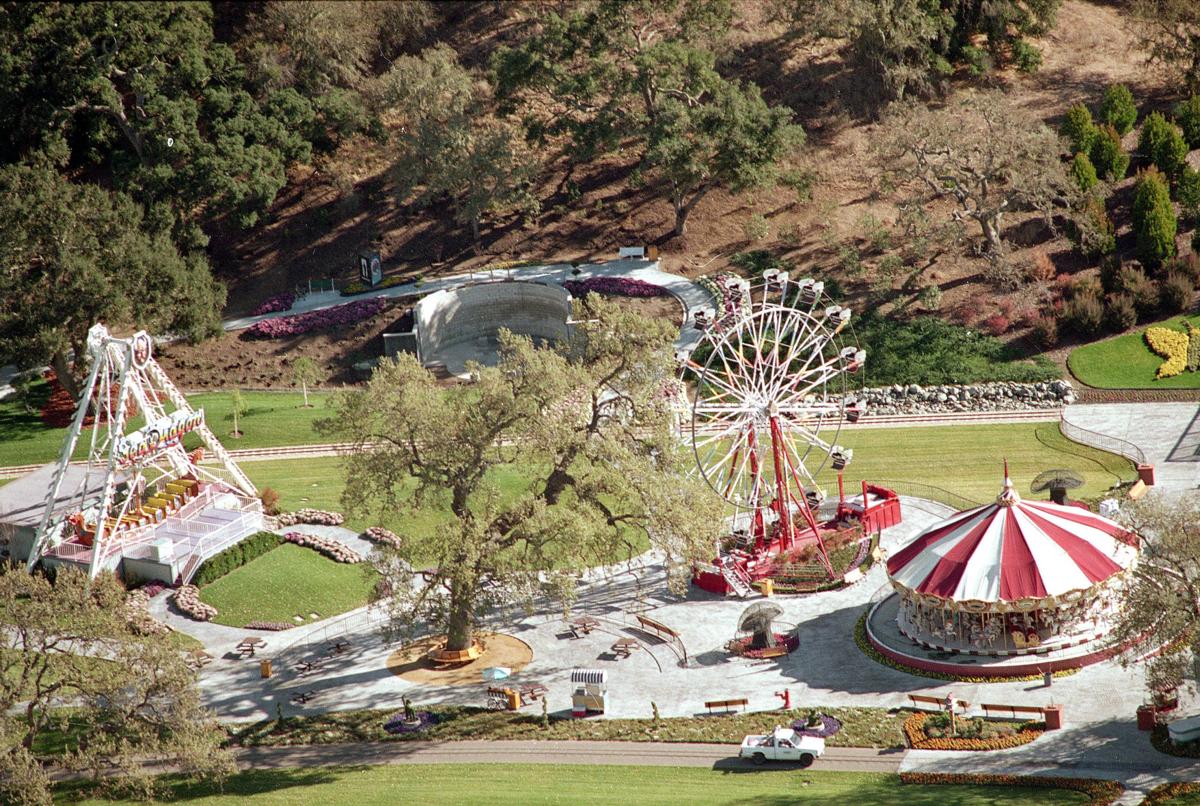 "Living with Michael Jackson" [MJ on sleeping with children: It's very charming. It's very sweet]

"Living with Michael Jackson"
Excerpts from the programme transcript (from ITV.com)
On Jackson's habit of sharing his bedroom with children:

Martin Bashir: "When you are talking about children we met Gavin - and it was a great privilege to meet Gavin because he's had a lot of suffering in his life - when Gavin was there he talked about the fact that he shares your bedroom?"

Bashir: "Can you understand why people would worry about that?"

Jackson: "Because they are ignorant."

Bashir: "But is it really appropriate for a 44-year-old man to share a bedroom with a child that is not related to him at all?"

Bashir: "That's not a worrying thing?"

Jackson: "Why should that be worrying, what's the criminal...who's Jack the Ripper in the room? There's some guy trying to heal a healing child ... I'm in a sleeping bag on the floor. "I gave him the bed because he has a brother named Star, so him and Star took the bed and I went along on the sleeping bag."

Bashir: "Did you ever sleep in the bed with them?"

Jackson: "No. But I have slept in a bed with many children. "I slept in a bed with all of them when Macauley Culkin was little: Kieran Culkin would sleep on this side, Macauley Culkin was on this side, his sisters in there...we all would just jam in the bed, you know. "We would wake up like dawn and go in the hot air balloon, you know, we had the footage. I have all that footage."

Bashir: "But is that right Michael?"

Bashir: "The world needs a man who's 44 who's sleeping in a bed with children?"

Jackson: "Because what's wrong with sharing a love? You don't sleep with your kids? Or some other kid who needs love who didn't have a good childhood?"

Jackson: "That's because you've never been where I've been mentally ..."

Bashir: "What do you think people would say if I said well - 'I've invited some of my daughter's friends round or my son's friends round and they are going to sleep in a bed with me tonight'?

Bashir: "What do you think their parents would say?"

Jackson: "If they're wacky they would say 'You can't', but if you're close family, like your family, and you know them well and ..."

Bashir: "But Michael, I wouldn't like my children to sleep in anybody else's bed."

Jackson: "Well, I wouldn't mind if I knew the person well. I am very close to Barry Gibb - Paris and Prince can stay with him anytime; my children sleep with other people all the time.

Bashir: "And you're happy with that?"

Jackson: "Fine with it. They're honest, they are sweet people. They are not Jack the Ripper."

Bashir: "What is it, Gavin, about Michael that makes him connect so well with children? What is it?"

Gavin: "Because he's really a child at heart. He acts just like a child, he knows how a child is, he knows what a child thinks". "See, because I think that you don't necessarily have to be a child just because society says that 18 and up you have to be an adult. Doesn't really matter. You're an adult when you want to be one."

Bashir: "When you stay here, do you stay in the house? Does Michael let you enjoy the whole premises?"

Jackson: "I slept on the floor. [to Gavin] Was it a sleeping bag?"

Gavin: "You packed the whole mess of blankets on the floor."

Jackson: "Yeah, I'm 4. I love, I feel, I think what they get from me, I get from them. I've said it many times, my greatest inspiration comes from kids. Every song I write, every dance I do, all the poetry I write, is all inspired from the level of innocence." "That consciousness of purity. And children have that. I see God in the face of children. And man, I just love being around that all the time."

Bashir: "Well, you know, but some have, and they say, is that really appropriate for a man - for a grown man - to be doing that? How do you respond to that?"

Jackson: "I feel sorry for them because that's judging someone who just wants to really help people." "Why can't you share your bed? The most loving thing to do, is to share your bed with someone."

Bashir: "You really think that?"

Gavin: "You are taking the position that you use every single night that you sleep and you're sharing it with another ..."

Bashir: "But haven't you got a spare room or a spare house here where he could have stayed?"

Jackson: "No.. yes, we have guest units, but whenever kids come here they always want to stay with me, they never want to stay in the guest rooms." "And I have never invited them into my room, they always just wanna stay with me. They say, 'Can I stay with you tonight?', so I go 'If it's OK with your parents then yes you can'."

Bashir: "Were your parents happy that you were here with Michael?"

Gavin: "Yeah, well, my ma was very, very, very happy. And I know they're happy, because I'm happy."

Bashir: "Did they come with you?"

Gavin: "Most of the time I wasn't busy with my parents, I was mainly with Michael."

Bashir: "But they were happy that you were here?

Jackson: "I'm just very sensitive to their pain and I am very sensitive to the family, the human condition, you know. "On that subject, it means a lot to me and I want to help. Whatever I can to help that you know, it's like I said before and I'll say it a million times, I'm not afraid to say it." "If there were no children on this earth, if someone announced all kids were dead, I would jump off the balcony immediately, I'm done, I'm done."

On allegations of molesting 13-year-old Jordy Chandler, which Jackson has always denied, He paid the boy's parents 18 million to drop a civil case against him:

Bashir: "I suppose the problem for many people is what happened in 1993, or what didn't happen?"

Bashir: "Just cast your mind back, what was that like when you first heard the allegations that were being made against you?"

Jackson: "It was shocking and I'm not allowed to talk about this by way of law, so ..."

Jackson: "I was shocked because, um, God knows, in my heart how much I adore children."

Bashir: "Isn't that precisely the problem, that when you actually invite children into your bed you never know what is going to happen?"

Jackson: "When you say bed, you're thinking sexual, they make that sexual, it's not sexual." "We're going to sleep, I tuck them in and I put a little like, er, music on and when it's story time I read a book." "We go to sleep with the fireplace on. I give them hot milk, you know, we have cookies, it's very charming, it's very sweet, it's what the whole world should do."

Bashir: "The reason that has been given for why you didn't go to jail is because, because you reached a financial settlement with the family?"

Jackson: "Yeah, I didn't want to do a long drawn-out thing on TV like OJ, and all that stupid stuff, you know, it wouldn't look right. I said, look, get this over with. I want to go on with my life. This is ridiculous, I've had enough, go."

Jackson: "That's because you've never been where I've been mentally..."

There are probably millions around the world that would be surprised, naive idiots, mostly. He still had a huge fan club of admirers. Probably will still have even after this.

He was very disturbed.

look at his tox report

Can you seriously doubt anything regarding this sick bastard after this latest news?

And this is the guy that Congress gave a moment of silence to when he died (or basically killed himself with drugs).

Yep — Both MJ and Hillary and (fill in the blank).

Muy el maximo sicko. Says something about his fans, too.

It’s a shame this vermin died without an angry father beating him to a pulp.

Jackson was the guy driving the ‘free candy’ van only with a lot more money.

I'm surprised to hear this now. Why now? Because of a documentary? Really? The media did its best to bury these stories and mourn Jackson's passing like he was a grand American hero or something. Sure Jackson was a sick dog, but the Jackson-loving media is sicker.