When Apollo 11‘s Eagle lunar module landed on the moon on July 20, 1969, astronauts Neil Armstrong and Buzz Aldrin had to do something hard: Wait. They were scheduled to open the door of their lunar lander and step onto the unknown surface of a completely different world. But for now, their mission ordered them to take a pause before the big event.

And so Aldrin spent his time doing something unexpected, something no man had ever attempted before. Alone and overwhelmed by anticipation, he took part in the first Christian sacrament ever performed on the moon—a rite of Christian communion.

Aldrin’s lunar communion has since become shrouded in mystery and confusion, but the rite itself was relatively simple.The astronaut was also an elder at Webster Presbyterian Church, and before he headed into space in 1969, he got special permission to take bread and wine with him to space and give himself communion.

Thats “One small sip of wine for man...”

Wasn’t this depicted on “From Earth to Moon”?

What possible reason to keep this secret, other than to deny faith as legitimate?

It is a serious question. I would like to hear reasonable answers. 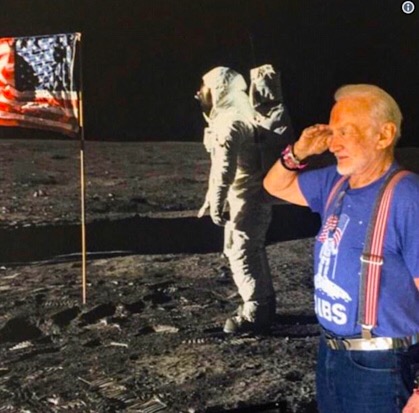 You can bet now that they would give them a prayer rug for a Muslim astronut.

I don’t think this was ever a secret.

Everyone knows that Christian white men did NOT land on the moon, it was women and muslims that did all the engineering.

I read about Buzz had blessed wine and bread from his home church with him on the moon and did eat the bread and drink the wine saying the proper words while on the surface.

It’s been known for a long time.

I don’t believe the service says it is on behalf of all mankind. It’s simply one man expressing his faith. It curdles my blood to see them avoid talking about this. It’s in fact censorship of Christianity.

If a Hindu or Muslim would have done something in space, the whole world would be marveling at the sanctity of the event.

Christianity does not have to go invisible, and essentially this is what they demanded of Aldrin.

Yes. It’s also in a number of books.

When a muslim gets to the Moon he’ll claim it for islam.

Muslim astronut. Astronut. Get it? I know. It’s lame.

Like that cartoon with a boy asking him mother why there aren’t any muslims on Star Trek, and mom telling him because it’s the future.

It was never acknowledged during the missions because NASA was embroiled in a lawsuit against Madalyn O'Hair over the Apollo 8 Genesis passage.

All accounts say that the wine curled gracefully up the side of the cup in lunar gravity, but the book I read said that Aldrin specifically meant to make note of this detail and completely forgot in all the excitement.

I remember when John Young took a clandestine sandwich into space, and later Li’l Abner went to the moon with a sandwich. The moon men took lots of photos of him, but none of the moon men.

The first Bible readings of Genesis from Outer space which set off the atheists demanding equal time, so they offered them equal time. Just get yourself into space and do it.

First I’ve herd of this. Maybe it was kept quiet because of the atheists will again be upset, even though it was fifty years ago.

Conspiracy nuts will also tell you that in addition to taking Communion, Buzz Aldrin performed a Masonic Temple ceremony.

19 posted on 01/27/2019 6:46:37 PM PST by Yo-Yo ( is the /sarc tag really necessary?)
[ Post Reply | Private Reply | To 1 | View Replies]
To: DoughtyOne
I don’t believe the service says it is on behalf of all mankind. It’s simply one man expressing his faith. It curdles my blood to see them avoid talking about this. It’s in fact censorship of Christianity. If a Hindu or Muslim would have done something in space, the whole world would be marveling at the sanctity of the event. Christianity does not have to go invisible, and essentially this is what they demanded of Aldrin.