New York was already doing a fine job of slaughtering its unborn, especially its black babies. Why, then, did it need to pass a new, more extreme abortion law? And why did New York do this on the anniversary of Roe v. Wade? There’s one simple answer: blood lust.

Yet somehow, even with that “archaic” law, New York was already the abortion capital of America, aborting babies at twice the national average.

Somehow, New York was still managing to kill one baby for every two babies born.

And, despite that “archaic” law, New York City was able to kill more black babies in the womb than bring them to birth.

But no, that was not enough. The law must be expanded.

Today, a perfectly viable baby of nine-months, ready to be born at any minute, can be slaughtered by the will of the mother.

That is blood lust.

That is the spirit of baby killing.

There is nothing humanitarian or compassionate about it.

It is cruel. It is unwarranted. It is murderous.

And it utterly Orwellian to refer to it as the “Reproductive Health Act.” Why not call it for what it is?

The moral bankruptcy of New York’s new law – the pride of “Christian” governor Andrew Cuomo – is fully exposed in the last phrase of this sentence: “an abortion may be performed by a licensed, certified, or authorized practitioner within 24 weeks from the commencement of pregnancy, or [if] there is an absence of fetal viability, or at any time when necessary to protect a patient’s life or health.”

Yes, the baby may be terminated “at any time when necessary to protect a patient’s life or health.”

And what, exactly, does that mean? What if the mother’s mental heath needed to be protected? What if she felt, the day before her due date, that she just couldn’t take the stress of having a child. Would that merit abortion?

But that is to beg the question, since the baby could easily be delivered and adopted. We’re talking about a totally viable baby! A baby that, under normal circumstances, would soon be crying and nursing outside the womb.

Today, however, that baby’s well-being is at risk until the moment of the birth.

This is madness. This is murderous. Shades of Kermit Gosnell on steroids!

Princeton professor Robert P. George expressed it so well. He wrote: “A huge irony: The NY law authorizing the killing of babies in the third trimester PROVES that the aim of the abortion lobby is NOT the protection of maternal health in circumstances of hazardous pregnancy, but is rather the right to destroy an unwanted child whose existence poses no risk to maternal health (in any sense of the term ‘health’ that amounts to anything other than a rationalization for killing unwanted babies). The only reason to kill rather than deliver a child in the third trimester of pregnancy and gestation is that the woman (or someone who is pressuring her to abort) wants the child to be dead rather than alive. It's the child's *existence*, not the pregnancy, which poses the alleged, ‘health’ risk. The pregnancy can be ended (‘terminated’) by delivering the baby alive, rather than killing him or her. So do you see the see the sophistry in the argument for abortion here? It's glaring.”

Yes, why not simply deliver the baby? If the mother’s health is allegedly at risk and the baby is viable outside the womb, why not deliver it?

Plenty of parents would love to adopt the child.

Plenty of parents would gladly open the doors of their home to this precious little one.

And let’s not have some romanticized view of how a third-trimester baby is terminated. As noted by Steven Ertelt (with reference to a former abortionist), “the baby is injected with a poison directly into his skull or torso. He then suffers a hideously painful death, which he will certainly feel because of his developed nervous system. The mother carries the corpse around in her womb for a day. The next day, there is an ultrasound to check if the baby is dead. If he isn’t — if he has been writhing and suffering in agony for the past 24 hours, clinging onto life — then he will be injected again. The following day, the mother delivers her dead child. Sometimes she delivers him at the clinic, but if she can’t make it on time, the clinic is perfectly happy to recommend that she give birth into her toilet.”

How can this possibly be for the good of the mother? And under what moral code is this not barbarous and inhumane? Or should we mention the grisly details of “partial-birth abortion,” where the child is delivered feet first, then the skull is pierced with scissors and its brains sucked out – while still alive?

And if a baby somehow survived the murderous attempts of the abortionist, who does not even have to be a doctor? What if it was still born alive? Under previous New York law, efforts would be made to care for the child. But no longer! Under this new law, those provisions have been removed. The baby must die!

Yet New Yorkers were celebrating this moral madness. They were shouting for joy!

And in a final statement of depravity, the 400-foot spire of One World Trade Center was lit up in pink, as if to honor the women of New York.

It should have been lit up blood red.

#BlackLivesMatter (except in the womb?)

Bad as this is, no woman is forced to slaughter her child inside or partially outside the womb. That is her own premeditated murder.

Not only is she not forced to do it, but there are laws in place that make it treacherous for anyone who tries to stop her, talk er out of it - even pray near the abortion mill.

American women have killed roughly 60 million of their own children since 1973. Now that it’s ‘easy’, that number will go up faster than the national debt.

Women aborted when it was totally illegal, and they will continue to abort when it is all legal and encouraged. Whether the state sanctions it or not should not be a factor.

Time to stop blaming the state for the female exercising her free will to kill.

Someone voted Cuomo in... Democrats and others. SOmeone wrote that bill, Yes, he has a grave responsibility but I don’t think he is alone.

The demonicrat party is the new Aztec empire complete with mass slaughter of innocents. Time for a new Guadalupe appearance of Mary or else God’s wrath will be unbearable at the Last Days. 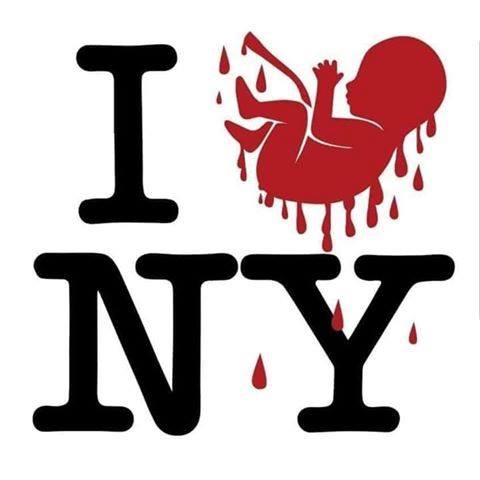 Although this question probably cannot be honestly answered for NY, do legal majority NY voters support this law? Or is MSM just giving impression that voters support it?

in my entire life, I have not witnessed a more immoral and frankly sickening piece of legislation as this

it STINKS! and should be overturned ASAP!
My LORD, what Satanic influence has taken over Albany?

The column calls Cuomo a “Christian” with quotes around the term. What’s his denomination? If he’s Catholic, the pope needs to excommunicate him! Oh, the Catholic Church doesn’t excommunicate anyone anymore?

Back in 1984, I was a founding member of a pro-life pregnancy center. In order to get all our ducks in a row in order to open we did some research on our opponents. You see we had rented the office right next door to an abortion clinic.

One piece of research we found was done by the Guttmacher Institute, which is the research arm of Planned Parenthood.

They conducted a study where they asked women - if abortion were illegal would you still try to get an abortion?

If 90% were not going in for abortions, imagine what that would do to Planned Parenthood's business model.

This last year I went to the Guttmacher website and I looked for that study and it is no where to be found.

Why do you think 10% of the women would get an abortion "no matter what"? Because they are sociopathic by nature and have no conscience.

What has happened is with the laws telling women it's all right for them to kill their babies - they do kill them, but if the laws said no - 90% of the women would carry their babies to term and either keep them or adopt them out.

Look for them to allow the Murder of children up to the age of 10 years and call it Abortion. When you give the Murdering bastards an inch they take 200 miles. Repeal Roe vs Wade.

15 posted on 01/26/2019 1:02:02 PM PST by SaveFerris (Luke 17:28 ... as it was in the days of Lot; they did eat, they drank, they bought, they sold ......)
[ Post Reply | Private Reply | To 7 | View Replies]
To: Kaslin
Both the New New Left and Right are becoming more intolerant of ideological differences. In my lifetime, both when abortion was illegal and legal, it was a private matter between a woman and her physician. I personally know women who had abortions when they were illegal, probably most people have been told a story by relatives or friends. These were everyday churchgoing people who for personal reasons chose not to go through with a pregnancy. Their feelings were also private. Not one of the stories I heard was about a woman who took the decision lightly or without moral feeling.

But politically it is now THE issue upon which our American culture war is being fought. I choose not to make abortion a litmus test upon which I judge another person's moral character. I also choose not to discuss it publicly, but once in awhile I comment on it here at FR, just because in a Free Republic, it's a civic responsibility to speak up for one’s political viewpoint.

This current example of the lobotomized leftists in NY is par for the course because all they can do to defend their ideas since they have no ideas any longer is emote and twitch. As I said, the right has made the issue of abortion their hill to die upon, so left spasms in reaction.

I found the Reagan years much more tolerant of pro-choice Republicans than today's Republicans. We still could have rational debate amongst ourselves on the issue of whether it is immoral to abort a fetus or when does it become immoral, at what stage of pregnancy, or under what conditions is it both moral and legal? It is a very good question to ask and one that involves scientists and theology; how could any topic be more interesting?

Please don't reply to me with ad hominem attacks unless it's to give an example of what I've been arguing against here.

This is identical to the joyous celebrations in Ireland last May when baby-killing was authorized there.

And it has the same root cause.

Roe v. Wade is not the problem, and it never really was.

That decision created a CONSTITUTIONAL problem - a big one - but all it did regarding abortion was forbid states to enforce their laws.

If Roe went away tomorrow, it would not affect the NY law in the slightest. Many other states would pass similar laws - Illinois and California have done so already.

As I said in another post on this same subject, this is just another nail in the coffin of the nation once known as the United States of America. God will judge this country and one of the most glaring things it will be judged for is its murder of the innocent. See my tagline.....

Abortion is its sacrament.