PRESIDENT DONALD TRUMP reasserted a directive Wednesday – that the Pentagon quietly dismissed last week – that the military will assume responsibility for building a wall along the southern U.S. border.

Trump's announcement follows reports that the president withdrew his demand for $5 billion in funding for a border wall amid a lack of support in Congress as lawmakers seek a funding compromise that will keep the government open. Trump also repeated claims that a new trade agreement with Canada and Mexico will generate revenue that will fulfill his campaign promise of forcing America's southern neighbor to pay for the wall.

White House spokeswoman Sarah Huckabee Sanders indicated Tuesday that the administration was looking for other elements of the government that could fulfill one of the president's signature campaign promises.

"Mexico is paying (indirectly) for the Wall through the new USMCA, the replacement for NAFTA!" Trump wrote on Twitter, referring to the revised version of the North American Free Trade Agreement that he has rebranded as the U.S.-Mexico-Canada Agreement. "Far more money coming to the U.S. Because of the tremendous dangers at the Border, including large scale criminal and drug inflow, the United States Military will build the Wall!"

A spokeswoman for the U.S. Army headquarters currently overseeing domestic operations along the U.S. border deferred questions to the Pentagon, which did not respond immediately to requests for comment.

But on Dec. 11, following Trump's initial claims that he would direct the military to begin wall construction, Pentagon spokesman Army Lt. Col. Jamie Davis said, "to date, there is no plan to build sections of the wall."

"However, Congress has provided options under Title 10 U.S. Code that could permit the Defense Department to fund border barrier projects, such as in support of counter drug operations or national emergencies."

The statement from a department that regularly touts its ability to respond to directives immediately was seen as a way to push back on an unplanned demand from the president without openly contradicting the commander in chief.

Trump has hinted at the idea of using the military to pay for or build the wall, including in March. Federal agencies, however, cannot reappropriate funds without congressional approval. And top legislators on Capitol Hill have questioned whether Trump's authority to deploy the military could extend to building a permanent barrier.

[ "The real issue here is the money. There is nothing in the DOD budget that I could recognize as authorizing them to build a wall. I don't know where they get the authority," Sen. Jack Reed, a Rhode Island Democrat, said, according to The Washington Examiner.

Trump has previously used his executive power to deploy the military in support of domestic border issues without an apparent funding mechanism. In October, shortly before the November midterm elections, he announced that thousands of U.S. service members would temporarily deploy to border crossings in Texas, Arizona and California and unguarded portions of the southern border to help build fencing and wire barriers, and provide logistic support to U.S. Customs and Border Patrol. Trump claimed this was a necessary response to a caravan of hundreds of migrants approaching the U.S. from Central America.

Top military officials, including Defense Secretary Jim Mattis, pushed back at the time on Trump's assertions that the military would serve as a police force, saying its responsibilities were limited to logistics and support roles.

That deployment is expected to cost tens of millions of dollars, which will likely come out of the Defense Department's operating budget.

“COE could do it with minimal effort. By using competitive-bid, multiple regional prime contractors who were familiar with local conditions together with on-site 24/7 COE inspectors”

The US Army Corps of Engineers is already managing the contracting for Homeland Security. Two big standing contracts have been established (an East and a West), and a pool of contractors are pre-approved. They have already been using them to bid on and award segments of the wall. Two of those segments (Calexico, CA and Santa Teresa, NM) are already finished.

All they need is money (a valid fund cite code).

Send have a long list of judges that will thwart whatever Trump wants to do.

The quote is upthread in the posters section THAT is my source, I was responding to the comment. 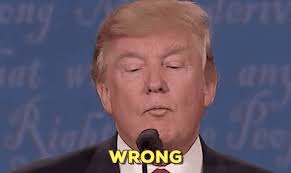 He has accomplished some great things, but overall, it is looking more and more like he is only a speed bump.

Lot's of blame to go around, but I put the majority on Speaker Ryan. He was the #1 roadblock to Trump getting more done.

On a tangent, Sessions was the worst thing to happen within the Trump administration.

In the context of our discussion, yes.

Some trump supporters did not vote for the House because the gop were pretty worthless in terms of enacting trumps agenda. That was one of the reasons the dems will control it.

Failure to fire Obama holdovers and appointing non trump people to high positions in the govt hurts trumps agenda. Wasting effort enacting democrat liberal legislation like prison reform doesn’t earn points with the base. Not declassifying the fisa, no points. No wall, no points. No vetos of bloated budget bills, no points.

Trump can’t tweet himself to victory. Mexico did not pay for the wall so what’s the point in claiming they did.

Bottom line, trump supporters and independents will be trumps path to reelection. You better give them a reason to turn out. Keeping the house apparently wasnt very persuasive.

Hillary will not be on the ballot so . Don’t count on a great economy winning votes, didn’t this year.

Fire the Obama holdovers. Get rid of the dirtbags, Wray, Nielsen, Kelly,mattis aNd any others that don’t want to implement the agenda.

Agreed,
The Corps of Engineers has
Their name All over the
Landing Mat here in Campo.

Maybe Trump can find his “pot of Money” in Ireland. I’m sure in the woods next to his golf course lurks a Leprechaun.

Ann is Not any Help
on this particular
Issue,same with all the
Sourgrapes on this Thread.

Trump’s work in preventing
The Caravans’ entry is
Proof he’s in This Fight!

2 years of wadding through the Washington Swamp and Corruption filling the Halls of Congress and you want it done in one clean sweep......you’re expectations are extremely unrealistic.

It’s been gone over numerous times on what this President has faced, faces now and will in the future....WHILE making great strides accomplishing good things for this country and it’s people.

He said in his run that we would have to be flexible.....that he would do some things we wouldn’t like and that there would be times he’d just walk away from when something if it wasn’t going according to the plan and revisit it at a later time.

I intend to continue to give the man room...and then some....

Thank you! Reading the drivel comments by freepers is so disappointing.

It’s harder and harder to come back here. To depressing.

Apparently the Bill Crystal contingent of the Conservative Movement (TM) have become the loudest voices in Freeperville.

Trump’s work in preventing
The Caravans’ entry is
Proof he’s in This Fight!

Xxxxx
B.S. Trump closed border one place for a few hours, moved some soldiers, strung some wire, blocked some of the drive through, walk through crossings with containers, let a little tear gas etc.be used and let thousands cross elswhere.

He (and the country) is finished unless he throws caution to the winds and closes the border and shuts down country.

He will win the base back and save the country.

99 posted on 12/19/2018 1:40:18 PM PST by amihow
[ Post Reply | Private Reply | To 91 | View Replies]
To: Jay Thomas
Apparently the Bill Crystal contingent of the Conservative Movement (TM) have become the loudest voices in Freeperville.