President Trump on Saturday issued a tweet-storm following the removal of conspiracy theorist Alex Jones and his InfoWars shows from most major social media platforms earlier this month.

“Social Media is totally discriminating against Republican/Conservative voices,” the president wrote in the first of several tweets. “Speaking loudly and clearly for the Trump Administration, we won’t let that happen.”

We hate you. Therefore you are guilty of inciting hate. Therefore we can ban you.

Oh... you hate us, TOO? Well, then you are guilty of hate. Therefore we can ban you.

Notice how they make it sound like Trump is talking about Alex Jones. I just hate these bastards.

Social media is the only platform we have to know exactly what our President says because the MSM won’t report fairly. I know a lot of people say they will never join Twitter or Facebook but I want to read what my President has to say without some stupid lying pundit telling me what I’m hearing and what to believe. Both Twitter and Facebook have their faults but conservatives are fighting back and even with censorship most of the truth gets through.

Hollywood does not censor negative speech nor extreme violence in its entertainment. And I have seen vile tweets against Trump that is not censored by Twitter and I am sure Facebook does not censor that either.

So it certainly is not those concepts that Twitter and Facebook are trying to shut down. The enemy is obviously Trump, conservatives, and conservatism.

Yep. They weren't able to selectively silence him and were afraid to ban him. I joined Facebook to keep up with long distance family, former co-workers, etc. I joined Twitter to keep up with politics. I don't post political stuff on my Facebook but do read the political posts of my friends. If you keep Facebook secure and only allow trusted friends access, it's pretty safe. I don't "friend" anybody I don't personally know so I only have 68 friends. I cringe when I see people posting personal stuff to "Public". I also use Instagram for posting photos and following Trump and others. They all post on Facebook, Twitter and Instagram. If you have those you never have to get your news anywhere else.

Blasting it is one thing, what will he do to correct it? Will he sic the DOJ/FBI on them? FTC? Others? That should be openly done. Challenge social media to either be (1) a social platform of 3rd party content which they don’t touch or (2) filter and responsible for content. They cannot have it both ways. Whether via law or court, they need to choose, owners of content or not. Censorship is wrong, restore the content or own all of it.

Social Media told the Dems sit back and relax we’ll hand you this election on a Silver Platter ,LOL

Can’t wait to frame this and hang it up in the office. 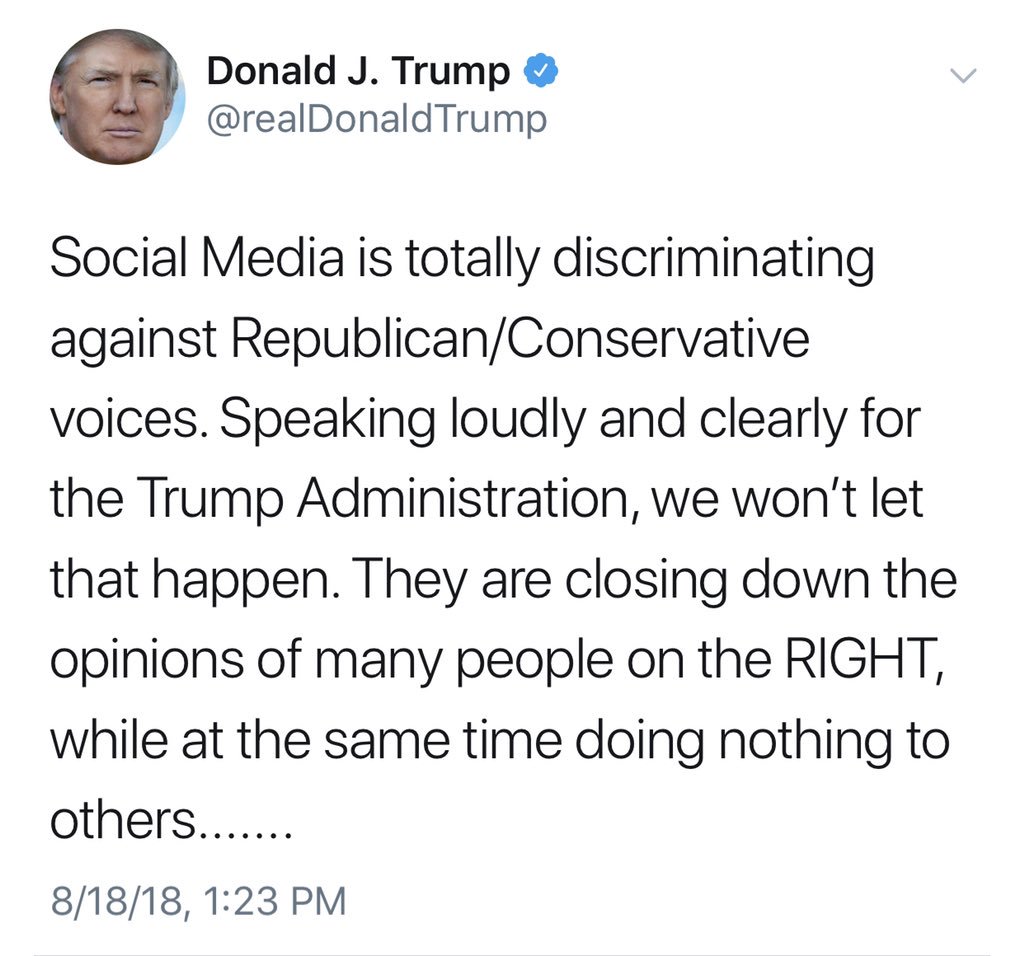 Yup, they just declare everything they disagree with as “hate speech.”

15 posted on 08/18/2018 7:05:23 AM PDT by SunkenCiv (www.tapatalk.com/groups/godsgravesglyphs/, forum.darwincentral.org, www.gopbriefingroom.com)
[ Post Reply | Private Reply | View Replies]
To: All
For a long time, the US government had various relationships with all the major tech companies.
One big relationship is the PRISM program, wherein the government is allowed to vacuum up
data from lots of social media databases.

Some questions that could use answers:

<><>1) How many tax dollars do social media companies suck-up from giving government agencies access to their data?

<><> 2) How much influence does this give US govt agencies over the policies of the social media company?

<><> 3) Has the Deep State been using its influence for political purposes?

<><> Has the Deep State used its power to (a) oppose certain voices, and, (b) to support other voices in the social media environment?

Will they Ban Trump and commit suicide ?

17 posted on 08/18/2018 7:08:52 AM PDT by butlerweave
[ Post Reply | Private Reply | To 1 | View Replies]
To: All
PRES TRUMP WROTE IN SEVERAL TWEETS: “Social Media is totally discriminating against Republican/Conservative voices.
Speaking loudly and clearly for the Trump Administration, we won’t let that happen.”

FACEBOOK IS A PUBLICLY-HELD COMPANY SUBJECT TO SEC RULES The SEC looks askance when publicly-held companies misrepresent their value to investors and/or falsifies Annual Reports. This Facebook Prospectus is what Zuckerberg used to dupe investors when he went public. The prospectus describe "a public forum where all viewpoints are equally tolerated." That's what he said....what he did was radically different.

Our mission is to make the world more open and connected. People use Facebook to stay connected with their friends and family, to discover what is going on in the world around them, and to share and express what matters to them to the people they care about.

Developers can use the Facebook Platform to build applications (apps) and websites that integrate with Facebook to reach our global network of users and to build products that are more personalized, social, and engaging.

Advertisers can engage with more than 900 million monthly active users (MAUs) on Facebook or subsets of our users based on information they have chosen to share with us such as their age, location, gender, or interests. We offer advertisers a unique combination of reach, relevance, social context, and engagement to enhance the value of their ads.

We believe that we are at the forefront of enabling faster, easier, and richer communication between people and that Facebook has become an integral part of many of our users’ daily lives. We have experienced rapid growth in the number of users and their engagement.

How We Create Value for Users

Our top priority is to build useful and engaging products that enable you to:

Connect with Your Friends. With more than 900 million MAUs worldwide, our users are increasingly able to find and stay connected with their friends, family, and colleagues on Facebook.

Discover and Learn. We believe that users come to Facebook to discover and learn more about what is going on in the world around them, particularly in the lives of their friends and family and with public figures and organizations that interest them.

Express Yourself. We enable our users to share and publish their opinions, ideas, photos, and activities to audiences ranging from their closest friends to our 900 million users, giving every user a voice within the Facebook community.

Experience Facebook Across the Web. Through apps and websites built by developers using the Facebook Platform, our users can interact with their Facebook friends while playing games, listening to music, watching movies, reading news, and engaging in other activities.

Stay Connected with Your Friends on Mobile Devices. Through the combination of our mobile sites, smartphone apps, and feature phone products, users can bring Facebook with them on mobile devices wherever they go. Foundations of the Social Web

We believe that the web, including the mobile web, is evolving to become more social and personalized. This evolution is creating more rewarding experiences that are centered on people, their connections, and their interests. We believe that the following elements form the foundation of the social web:

Authentic Identity. We believe that using your real name, connecting to your real friends, and sharing your genuine interests online create more engaging and meaningful experiences. Representing yourself with your authentic identity online encourages you to behave with the same norms that foster trust and respect in your daily life offline.

Authentic identity is core to the Facebook experience, and we believe that it is central to the future of the web. Our terms of service require you to use your real name and we encourage you to be your true self online, enabling us and Platform developers to provide you with more personalized experiences.

Social Distribution. Over time, people are consuming and creating more kinds of information at a faster pace across a broader range of devices. The growing volume of information makes it challenging to find meaningful and trusted content and to effectively make your voice heard. Facebook organizes and prioritizes content and serves as a powerful social distribution tool delivering to users what we believe they will find most compelling based on their friends and interests.

Express what matters to them?

Discover and learn more about what is going on in the world around them, particularly in the lives of their friends and family and with public figures and organizations that interest them?

We enable our users to share and publish their opinions, ideas, photos, and activities to audiences ranging from their closest friends to our 900 million users, giving every user a voice within the Facebook community?

The growing volume of information makes it challenging to find meaningful and trusted content and to effectively make your voice heard. Facebook organizes and prioritizes content and serves as a powerful social distribution tool delivering to users what we believe they will find most compelling based on their friends and interests?

This is why I think Trump already has a legal team going through the possibilities of taking legal action against Apple, Facebook, Alphabet’s Google, Twitter and Yahoo! all at the same time.

19 posted on 08/18/2018 7:11:45 AM PDT by RayChuang88 (FairTax: America's Economic Cure)
[ Post Reply | Private Reply | To 1 | View Replies]
To: RayChuang88
Conservatives lose arguments and fail to succeed on issues when they continue to let the Leftist/Globalists define the terms.
We now, in reality, have ‘social utilities’, not some ‘social media’ undefined and controlled by special interests.
The big fights about railroad pricing, and electric power, and telephones came about from similar abuse.
If your power company does not like your political views, they can't shut your power off, or the telephone company can't cut your service because of your politics.
If conservatives continue to yield to the Leftlists and allow then to control communications, the conservatives will lose big.
TWB