He turned over his cell phone, iPad and laptop to the private investigative firm - possibly in and attempt to keep them out of the hands of federal agents

The document does not say whether Granite Intelligence performed any other services for Weiner, in addition to housing his electronics

According to the unsealed court warrant, the FBI was searching for the name and identity of Weiner's victim as well as content sent to the victim

Disgraced politician Weiner hired a private investigative firm run by a former New York prosecutor to help deal with the fallout from his underage sexting scandal just two days after his relationship with a 15-year-old girl went public, according to newly unsealed FBI court records.

Weiner's sexting relationship with a high school sophomore was first reported by DailyMail.com on September 21, 2016.

Two days later, he turned over his cell phone, iPad and laptop to Granite Intelligence, a Manhattan-based firm that specializes in 'intelligence, investigation, and risk management services'.

In a federal warrant unsealed last week, federal investigators noted that Weiner's electronic devices were being held by the private firm when the FBI tried to obtain them on September 26, 2016. What a surprise it must have been for that FBI agent. Scrolling through dicks pics and sexts to underaged girls and BOOM!

Lookie here. Thousands of missing Hillary emails. Now how do you suppose they got here?

Of all people, I’m really surprised Carlos Danger has not assumed room temperature.

Besides Hillary herself - Weiner is the number one reason why she lost.

I think those emails were in a folder with a special name ...

5 posted on 05/22/2018 12:41:22 PM PDT by bankwalker (Immigration without assimilation is an invasion.)
[ Post Reply | Private Reply | To 3 | View Replies]
To: Responsibility2nd
Of all people, I’m really surprised Carlos Danger has not assumed room temperature.

They're worried that he has a little insurance policy that nobody knows about. That is all that is likely to keep the boy breathing. And I wouldn't be too surprised to learn that that's exactly what the laptop was.

Carlos always wanted to be famous. He is going to get his wish.

“He was hoping to bury the laptops Huma & Hillary correspondence.”

That’s why the FBI wanted them too. Protect Hillary via destruction or lose in the mail. 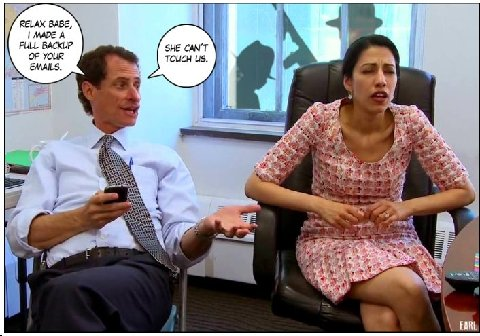 I just think he wanted a 3rd set of eyes on those devices.

Excerpt: Text messages obtained by DailyMail.com show Weiner was aware of the girl’s age, as she discussed being in high school and getting her learner’s permit.

Weiner also sent the girl suggestive photos of himself, complimented her body, told her he woke up ‘hard’ after thinking about her, and called her ‘baby’.

In one message, he told her: ‘I would bust that tight p***y so hard and so often that you would leak and limp for a week.’

The former politician, who stepped down from congress and lost a promising mayoral campaign due to previous sexting scandals, pleaded guilty last May to sending obscene images to a minor.

He was sentenced to 21 months in prison last fall.

Weiner apologized to the victim in court during his sentencing last year, saying: ‘I have a sickness, but I do not have an excuse.’

"It says it uses 'a combination of investigative, accounting, financial, technical and industry skills and resources to efficiently resolve our clients' problems'.

Sounds like blackmail and extortion. I try to enter Weiners head as this is going down. Was he prescient that a raid was coming or was it obvious because the news? Did he think that he was going to be a Fort Marcy park victim but only if the infamous 'they' could get a hold of these devices?

It seems to me he knew somebody wanted them other than LE and separated them from himself. Perhaps for safety sake or perhaps for leverage. I'm surprised he's still alive.

It has a SPECIFIED target for seizure, and even a time when the warrant may be executed.

Compare with picking a lock in the middle of the night and busting down a door (Manafort), and seizing EVERYTHING you can get your grubby little paws on like what happened with Cohen.

Why is everything all legal-like with democrats, and Gestapo-like with republicans?

“Besides Hillary herself - Weiner is the number one reason why she lost.”

True, but I still put that on Hillary. Abedin should have been given an ultimatum as soon as her campaign started - leave the perv, or look for another job.

Could be. Somewhere, he might have someone he can trust, and sent them an, “.. if I should mysteriously shoot myself twice in the back of the head....” file, which could expose crimes by Hillary that we have not even considered.

I think you are right and it was “life insurance”

I wonder if Anthony ever sent this type of text message to Huma.

The FBI TRIED to obtain them? Didn’t they get the files? Info might be in the Daily Mail but that site won’t load for me.

And why did the FBI want the devices? To investigate Weiner - or to destroy evidence in the devices to cover for Hillary? Now we know where the FBI’s loyalties were at that time.

Unless NYPD kept a copy of his hard drive, we may never know what evidence was there in the Huma-Hillary emails.

Abuse of the English language.