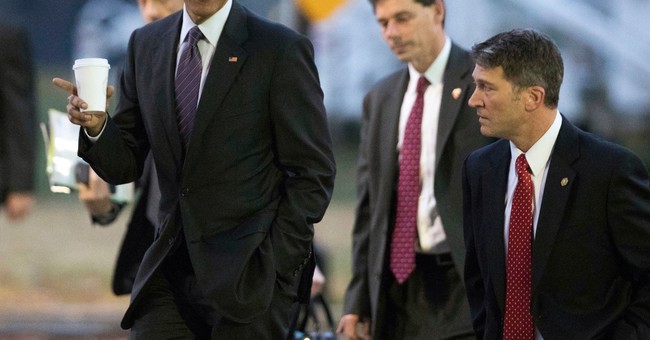 It’s over. The Iran Deal is over for the U.S. President Trump announced our withdrawal from the agreement this afternoon:

Excellent, clear speech. One of the strongest moments of Trump’s presidency.— Guy Benson (@guypbenson) May 8, 2018

"I am announcing today the United State will withdraw from the Iran Nuclear deal," Trump said from the Diplomatic Room. "This is a horrible, one sided deal that should have never been reached..It didn't bring calm, it didn't bring peace and it never will."

"The deal's sunset provision is unacceptable," Trump continued. "If I allowed this deal to stand, there would soon be a nuclear arms race in the Middle East."

"It is clear to me we cannot prevent an Iranian nuclear bomb under the decaying and rotten structure of the current agreement. The Iran deal is defective at its core," he said further.

Guy has his analysis about howthis is the right decisionfor the Trump White House. Yet, let’s be honest here. The media will go apoplectic over this decision. They will say it will degrade America’s credibility and speculate about a resurgent neoconservative circle emerging within the president’s foreign policy team. The Left with froth at the mouth, especially team Obama, who did nothing when Russia annexed Crimea, nothing when Yemen caught fire, nothing when chemical weapons were used in Syria, and did nothing for forcefully combat the rise of ISIS. This is the brain trust that said ISIS was the “JV team” of international terrorism. Well, now they are; Trump beat them. But it took his exit for our forces to effectively defeat the terror group on the ground. Yet, back to this deal, it’s not like this should be shocking. Trump campaigned on it. Also, are we truly floored that a state-sponsor of terrorism pretty much lied about their nuclear ambitions? Please, even members of Obama’s own party were against this agreement.

Admittedly, no one can tell with certainty which way Iran will go. It is true that Iran has a large number of people who want their government to decrease its isolation from the world and focus on economic advancement at home. But it is also true that this desire has been evident in Iran for thirty-five years, yet the Iranian leaders have held a tight and undiminished grip on Iran, successfully maintaining their brutal, theocratic dictatorship with little threat. Who’s to say this dictatorship will not prevail for another ten, twenty, or thirty years?

To me, the very real risk that Iran will not moderate and will, instead, use the agreement to pursue its nefarious goals is too great.

Therefore, I will vote to disapprove the agreement, not because I believe war is a viable or desirable option, nor to challenge the path of diplomacy. It is because I believe Iran will not change, and under this agreement it will be able to achieve its dual goals of eliminating sanctions while ultimately retaining its nuclear and non-nuclear power. Better to keep U.S. sanctions in place, strengthen them, enforce secondary sanctions on other nations, and pursue the hard-trodden path of diplomacy once more, difficult as it may be.

"The deal ultimately legitimizes Iran as a threshold nuclear state," Menendez, who stepped down as the top Democrat on the Foreign Relations Committee earlier this year amid corruption charges, said on MSNBC's "The Rundown." "The deal doesn't end Iran's nuclear program, it preserves it."

The New Jersey senator, a long-time critic of the negotiations, refuted President Obama's claim that the deal allows for 24/7 access to inspect any site believed to be violating the deal.

Sen. Joe Manchin will vote to oppose the nuclear agreement with Iran, joining every other member of West Virginia’s congressional delegation in opposition.

Manchin announced his decision one week after Democrats secured the votes necessary to make sure the deal goes into effect, downplaying, somewhat, the significance of his announcement.

The deal, which gives Iran relief from international economic sanctions in return for limits on and inspections of the country’s nuclear program, is all but sure to be put into place, despite the objections of West Virginia’s representatives.

Now-former Rep. Steve Israel (D-NY), Rep. Brad Sherman (D-CA), and Rep. Eliot Engel (D-NY) all opposed the deal as well. Yet, not enough were able to cross the aisle with Republicans to override a veto threat by Obama over the resolution to reject the agreement. From the September 10, 2015 edition of The New York Times:

Senate Democrats delivered a major victory to President Obama when they blocked a Republican resolution to reject a six-nation nuclear accord with Iran on Thursday, ensuring the landmark deal will take effect without a veto showdown between Congress and the White House.

A procedural vote fell two short of the 60 needed to break a Democratic filibuster. It culminated hours of debate in the Senate and capped weeks of discord since the United States, Britain, France, Germany, Russia and China announced the agreement with Iran in July.

This staunch opposition from the GOP and some Democrats is the reason why the Iran Deal is an agreement and not a treaty. It wouldn’t pass if that were the case.

Heard today that Congress was 61% AGAINST Oba-Mao’s Iran deal but of course, this sicko did it anyway just to build a “legacy”....

WORST PRESIDENT OF ALL TIMES!!!

Obama got a congressional minority to allow the agreement to take effect.

The big flaw with executive agreeements is they’re not legally binding. Only treaties are under the Constitution.

Obama’s complaint about it being voided is political not legal. He had every opportuniy to get a treaty but he and his advisers couldn’t get it through the Senate.

He can go fly a kite.

He’s not the worst president of all time...

He’s the worst *American* of all time.

Every bit as deserving of three hots and a cot at Guantanamo Bay as any 9/11 conspirator.

A true and genuine domestic enemy of the Constitution of the United States if there ever was one.

He is not American.

I don’t remember , did he do this with an Executve Order deal ? Stroke of the pen ?

“Senate Democrats delivered a major victory to President Obama when they blocked a Republican resolution to reject a six-nation nuclear accord with Iran on Thursday, ensuring the landmark deal will take effect without a veto showdown between Congress and the White House.

A procedural vote fell two short of the 60 needed to break a Democratic filibuster. It culminated hours of debate in the Senate and capped weeks of discord since the United States, Britain, France, Germany, Russia and China announced the agreement with Iran in July.”

I’m still scratching my head over this:

What the hell is going on here?

How many Americans do you suppose have existed? There are what 340 million of us today. Do you suppose if we added up every single American that has existed since the signing of The Declaration we’d have 600 million? A billion? Doesn’t matter - The F’ing Rosenburgs deserve Congessional Medals of Honor and a full apology from the US Government compared to the overt malfeasance of this one man. The distance between his status and the next worst citizen of the United States would take light years to traverse, his sins so manifest that only God himself can reconcile them. He is a demon without a doubt.

Is he a demon or an American?

Executive agreements are international agreements but they’re not treaties.

They don’t need to be ratified while treaties the consent of two-thirds of the Senate.

The latter are purposely difficult to pass because they create binding legal obligation and are the supreme law of the land.

Obama and Kerry couldn’t craft a treaty acceptable to the Senate because would never agree to the kind of terms that would make a treaty pass the Senate.

They just punted the issue and contented themselves with a less than ideal agreement.

Now Trump has voided Obama’s signature foreign policy achievement. He promised to do that on the campaign trail as a candidate.

And he fulfilled it as President.

The only “legacy” ZER0 has left is the destruction he did to the USA that is slowly being undone and healed by a real President.

Yes. If I am correct, with the approval of Congress, a treaty could have been put in place. But in true Obama fashion, he did not care about doing things “right”...only just doing things for HIS benefit. Self serving bastard.

More of obama’s phony baloney and garbage-level incompetence from the word “go.”

The whole thing was a fraud,

Now if there’s a way to undo Obama’s deal for Bergdahl and send the guy back.

And what of the $1.7 billion Zero gave them.