Maxine Waters just cranked the identity politics up to “max.”

The Democratic California congresswoman delivered an emotional address in Selma, Ala. on Saturday, telling her audience that she will sponsor legislation to provide African Americans with “reparations” for slavery if Democrats take back the House in this year’s midterm elections.

“This business about who’s the biggest, who’s the baddest, who’s got the biggest gun,” Waters said. “This president keeps edging that on. You know, he’s a bully. He has a bully mentality.”

The 79-year-old lawmaker called for a president who “not only has good sense, but understands diplomacy and understands what we need to do to have peace in this world, so that we can all look forward to the possibility where we’re someday gonna have a world that’s about peace and justice and respect for individual liberty.”

At that point, CNN commentator Angela Rye asked, “Is that your stump speech for 2020?” The audience erupted in applause.

Shortly after, a man in attendance asked Waters if she would support a reparations bill for blacks that had been sponsored by former Rep. John Conyers (D-Mich.), who stepped down last year amid sexual harassment allegations.

“I’ll be happy to do that,” Waters replied.

“But let me tell you this: In order to get where we need to go on this issue and other issues, we’ve really got to understand that 2018 is important to taking back the House and taking back the Senate. And, of course, we’ve got to get the White House.

“If we want to get to the point where we can get reparations, we’ve got to have the power to do that, number one, by having a supportive president would be wonderful, but taking back the House would be absolutely wonderful. “

The Democrat went on to tout her position as the ranking member of the House Financial Services Committee, and vowed to “take care” of Housing and Urban Development Secretary Ben Carson should Democrats gain a majority in Congress.

“But let’s understand, I need y’all to register and vote. I need to take back that House so that we can have a majority in the committee. I am the ranking member of the financial services committee that overseas Wall Street and HUD and all of that–and by the way, we gonna take care of Ben Carson, too.”

TOPICS: Constitution/Conservatism; Crime/Corruption; Culture/Society; US: Alabama; US: California; US: Michigan
KEYWORDS: alabama; angelarye; bencarson; california; johnconyers; madmaxine; maxinewaters; michigan; selma Navigation: use the links below to view more comments.
first 1-20, 21-40, 41-60, 61 next last
“If we want to get to the point where we can get reparations, we’ve got to have the power to do that, number one."

Typical senile old leftist—seize the power “for the people”.

Then open the concentration camps for the “enemy”.

Maxine can’t even censor herself anymore.

In this world there are two “Worlds” worth noting. The first is Jesse Watter’s World (Watter’s World), a look at the world of ignorance of the American Left.

Then there is Maxine Water’s World (Water’s World), a world which exists only in her mind and shared by Charles Manson and Robert Mugabe (dead or alive).

She will be the first person locked up under any new national insanity law aimed at preventing acts of mass murder. She’s a genocidal killer just waiting to get out of an old racist bitch’s body and mind. Kumbaya, Maxine. There is a nice padded cell waiting for you in Unicorn Land.

Get their ancestors that sold them to pay.

Or Zimbabwe......given a chance ignorant and dumb socialists have a knack of ruining everything,

She might want to be a little careful. Ben Carson might be well armed, and he might have a “no one’s gonna take care of me” attitude.

Keep a nice black woman on the side. Just in case reparations passes into law. I wants me a brown sugar mamma.

As Bill Clinton said, “They won’t spend it on the right things”.

Just change the wording on the EBT card. The new name would be “Reparations Benefit Transfer” or RBT.

They’re already getting their reparations.

11 posted on 03/06/2018 2:05:05 AM PST by Fresh Wind (Hillary: Go to jail. Go directly to jail. Do not pass GO. Do not collect 2 billion dollars.)
[ Post Reply | Private Reply | To 1 | View Replies]
To: Altura Ct.
Anyone care to point out that there is not ONE functional, even vaguely honest government on the the whole continent of Africa? South Africa has just announced it's intent to confiscate all white owned land.

I'd speculate as to causes, but thass' raciss'...

Yeah, I think she meant, “Of course we’ll strip his position and wealth, but we won’t send him to the camps!”

No censure! She’s even more crazy than Ron Paul. She is the perfect spokesperson for Democrats. Got to figure a way to promote her as Democratic minority leader, let people give thought to her as Speaker, number in line to the presidency. 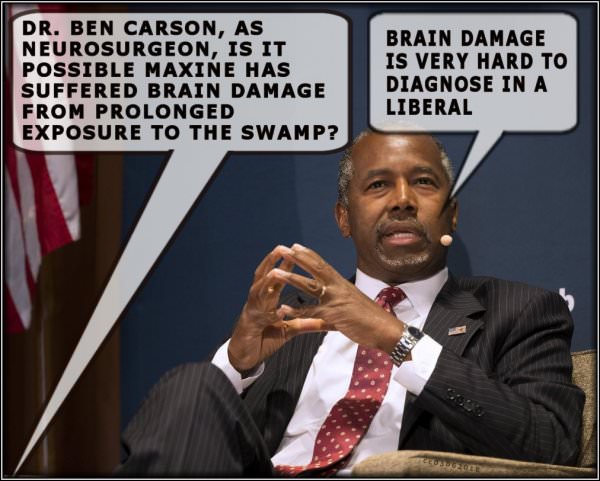 “Anyone care to point out that there is not ONE functional, even vaguely honest government on the the whole continent of Africa?”

It isn’t in Africa but the Bahamas (Predominantly black nation) waves hello at you. The place has issues but you can live there and the government probably less corrupt than some (Democratically controlled)US states.

Angola has emerged from its communist nightmare and is actually attracting Caucasian immigrants from Portugal and Brazil.

People pay a $1,000.00 a pint for the blood of a young person. research shows that when an older person receives a complete transfusion of this type of blood it reverses or stops the aging process.

Wonder how much a pint of blood sells for to these Satanists from an aborted baby. THINK ABOUT THAT.

You will never get a FN dime from me ,you senile old wind bag.