A long-shot candidate with a history of anti-Semitic statements and Holocaust denial is primed to represent the Republican Party in a congressional race in Illinois.

The candidate, Arthur Jones, is running unopposed in the GOP primary for Illinois' 3rd Congressional District,

His website contains sections such as "Holocaust?" which features a statement that says "there is no proof such a so-called 'Holocaust' ever took place anywhere in Europe, against the Jews."

This guy is so bad I wouldn’t be surprised to find he’s a Soros plant.

The GOP dropped the ball on this one.

Now, get ready for that national media to treat this race as if it were a presidential election.

You may very well be right.

This guy has run for the Republican nomination seven times since the 1990's. You think Soros plans that far ahead?

More likely, no serious candidate from the GOP wanted to run in this district; it has voted Dem in 24 of the last 25 congressional elections and all four of the last four presidential elections. Bernie Sanders won the district by 8 points in the 2016 primary.

“This guy is so bad I wouldn’t be surprised to find he’s a Soros plant.”

What would be the point?

Then find a somewhat serious candidate that is not a Nazi. 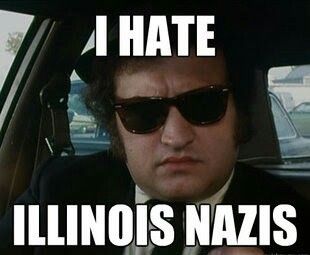 Well, you’d have to find one in the district.

Hard to find Republicans in a ghetto, even harder to find one that has the time and money to even run to lose.

“Hard to find Republicans in a ghetto, even harder to find one that has the time and money to even run to lose.”

It’s not that hard.

the parties do it all the time.

You find a businessman in the district, have him file for the seat and give him $20,000 for his losing campaign.

It winds up being a lot cheaper than Nominating a Nazi on the National News.

How do we end up with these clowns as GOP candidates?

Is Illinois void of competent conservatives?

Just have POTUS and VPOTUS do a commercial spot opposing the Nazi, like Reagan and Bush41 did supporting David Duke’s opponent.

That is an easy fix and i’d bet that Trump would be a lot more amusing than was Reagan and Bush. i loved Ronald Reagan, but think that Trump probably has a better sense of humour. At least he seems to improvise better.

He picked a district that has not elected a Republican in 3 decades.

Methinks no sane Republican would bother.

15 posted on 02/05/2018 3:39:18 PM PST by Jewbacca (The residents of Iroquois territory may not determine whether Jews may live in Jerusalem)
[ Post Reply | Private Reply | To 13 | View Replies]
To: G Larry
Is Illinois void of competent conservatives?

The Chicago area definitely seems to be.

I think you are forgetting Reagan was our funniest president.

Anyone can get on a ballot as a Rep or Dem just by claiming to be one. I honestly think both parties should fix that and actually require membership of any candidates running in the party’s name.

The GOP should be squealing over this guy much more than they did Roy Moore.

Hey Mitch, “there is nothing to learn from the second kick of a mule”.