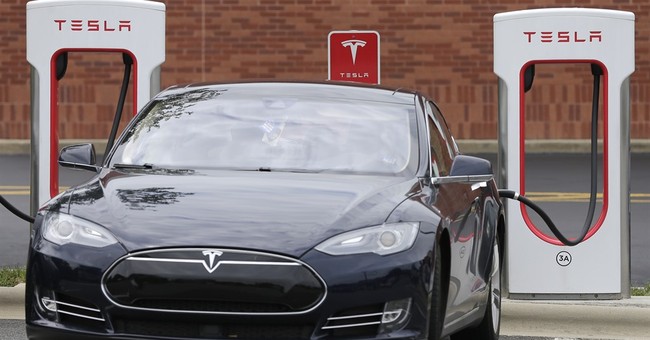 The first justification was that internal combustion engines polluted too much. But emissions steadily declined, and today’s cars emit about 3% of what their predecessors did. Then it was oil imports: electric vehicles (EVs) would reduce foreign dependency and balance of trade deficits. Bountiful oil and natural gas supplies from America’s hydraulic fracturing revolution finally eliminated that as an argument.

Now the focus is on climate change. Every EV sale will help prevent assumed and asserted manmade temperature, climate and weather disasters, we’re told – even if their total sales represented less than 1% of all U.S. car and light truck sales in 2016 (Tesla sold 47,184 of the 17,557,955 vehicles sold nationwide last year), and plug-in EVs account for barely 0.015% of 1.4 billion vehicles on the road worldwide.

In recent months, Tesla sales plunged to nearly zero in Hong Kong and Denmark, as huge government subsidies were eliminated. Now Tesla’s U.S. subsidies face extinction. Once its cumulative sales since 2009 reach 200,000 vehicles in the next few months, federal tax rebates will plunge from $7,500 per car to zero over an 18-month period. The same thing will happen to other companies if they reach 200,000.

Subsidies clearly drive sales for EVs, which are often at least double the cost of comparable gasoline-powered vehicles. Free charging stations, and access to HOV lanes for plug-ins with only the driver, also sweeten the deal. For those who can afford the entry fee, the ride is smooth indeed. In fact, a 2015 study found, the richest 20% of Americans received 90% of hundreds of millions in EV subsidies.

Where were all the government “offices of environmental justice” when this was happening? How much do we have to subsidize our wealthiest families, to save us from manmade planetary disasters that exist only in Al Gore movies and alarmist computer models?

Perhaps recognizing the reverse Robin Hood injustice – or how unsustainable free EV stations are for cash-strapped cities – Palo Alto (where Tesla Motors is headquartered) announced that it will charge 23 cents per kWh to charge plug-in vehicles in city parking garages. Others communities and states may also reduce their rebates, HOV access and free charging, further reducing incentives to purchase pricey EVs.

Meanwhile, Lyft and Uber are also decreasing the justification for shelling out $35,000 to $115,000 or even $980,000 for an electric car that gets very limited mileage on a charge. Long excursions still need internal combustion engines or long layovers to recharge EV batteries.

Intent on advancing its renewable energy and climate change agenda, the California legislature recently enacted a new cap-and-trade law that will generate revenues for the state’s “bullet train to nowhere,” by increasing hidden taxes on motor fuels, electricity and consumer products – with the state’s poor, minority and working class families again being hit hardest. State legislators are also close to passing a $3-billion EV subsidy program, primarily to replace the $7,500 federal rebate that Tesla could soon lose. Electric vehicle buyers could soon receive up to $40,000 for buying Tesla’s most expensive models! Coal-billionaire and California gubernatorial hopeful Tom Steyer vigorously supports the new subsidy.

We can also expect a battle royale over extending the federal EV subsidy beyond 200,000 vehicles – demonstrating once again that lobbyists are now far more important to bottom lines than engineers, especially when lobbyists can channel enormous contributions to politicians’ reelection campaigns.

As U.S. government agencies prepare to reassess climate change science, models and disaster predictions, it’s a good time to reexamine claims made about all the utopian electric vehicle and renewable energy forecasts, expanding on the land and raw material issues I raised in a previous article.

In an entire year, all the existing lithium battery factories in the world combined manufacture only enough capacity to store 100 billion Watt-hours (Wh) of electricity. But the USA alone uses 100 times this capacity: more than 10,000 billion Wh per day. Worldwide humanity uses over 50,000 billion Wh daily.

Focusing on solar power, that means storing electricity for 12 hours a day – to power homes and businesses around the globe for the 12 hours per day that photovoltaic systems will generate power each sunny day in the 100% solar world of the utopian future – would require 25,000 billion Watt-hours of battery power (ignoring future electricity needs to recharge electric vehicle batteries).

Replacing the gasoline in the tanks of 1.4 billion vehicles worldwide with electric power would require another 100 billion Watt-hours. That brings total global demand to well over 125,000 billion Wh of storage. That means it would take 1,250 years of production from every existing lithium battery factory worldwide to meet this combined demand. Or we would have to build 1,250 times more factories. Or we could build batteries that are 10 to100 times more powerful and efficient than what we have today.

In a world where we are also supposed to ban nuclear power, the very notion of eliminating the 80% of all global energy that comes from oil, natural gas and coal – replacing it with wind, solar and biofuel power – is fundamentally absurd. Can you imagine what would happen when the power goes out while we are smelting iron, copper, aluminum, cobalt or lithium ores … forging or casting metals into components … or running complex fabrication and assembly lines?

In the sustainability arena, has anyone calculated how much lithium, cobalt and other metals would be required to manufacture all those batteries? Where they would be mined – with nearly all the best U.S. metal prospects off limits to exploration and production, and radical environmentalists increasingly rallying to block mining projects overseas? The mines would have to be enormous, and operated by huge corporate consortiums. Will anti-corporate activists on our campuses suddenly have a change of heart?

Will homes, neighborhoods and communities have the electrical service (200 amperes or more per home) to handle all the lighting, computing, entertainment, air conditioning, medical equipment and other requirements of modern living – AND the power required to charge all the anticipated electric vehicles? What will it cost to upgrade neighborhood power grids, and home and commercial electrical systems?

Lithium batteries and their component metals pose unique fire and explosion risks. What safeguards will be established to minimize those dangers, in battery factories, homes and public parking garages?

Some factories and batteries will invariably be poorly built, handled or maintained. They will invariably malfunction – causing potentially catastrophic explosions. The bigger the factory or battery, the bigger the cataclysm. Will we apply the same precautionary principles to them as more rabid environmentalists insist on applying to drilling, fracking, pipelines, refineries, factories, dams and nuclear power plants?

Is the real goal of all this wind, solar and battery enthusiasm – and anti-fossil fuel activism – to slash living standards in industrialized nations, and ensure that impoverished nations are able to improve their health and living conditions only marginally?

We would do well to raise – and answer – these and other essential questions now, before we let activists, journalists, legislators and regulators con us into adopting more of their utopian, “planet-saving” ideas.

Paul Driessen is senior policy analyst for the Committee For A Constructive Tomorrow (www.CFACT.org) and author of Eco-Imperialism: Green power - Black death.

Excellent analysis of what most in the STEM world knows intuitively.

Of course, all of this is far beyond the meager abilities of your typical MSM writer, who thinks one must put caps on unused electrical outlets in order to conserve electricity.

Or an all electric car is carbon neutral.

Why can’t they build a prius with a larger battery so I could charge it at home and drive, say, 30 miles before the gas engine is needed. I could charge it overnight, spend nothing on commute gas, and have a long range car as well.

When the electric bulb was introduced they said it was impractical due to no grid to power them.

Same with gas cars ... NO gas stations were available.

5 posted on 07/22/2017 10:02:32 AM PDT by TexasGator
[ Post Reply | Private Reply | To 2 | View Replies]
To: cymbeline
Why can’t they build a prius with a larger battery so I could charge it at home and drive, say, 30 miles before the gas engine is needed. I could charge it overnight, spend nothing on commute gas, and have a long range car as well.

Because then it would be a Chevy Volt.

Range is 25 miles. Besides, you need to burn a little gas to keep it fresh.

They claim this one will go 25 on battery alone.

Volt has an IC engine?

Elvon Musk has raised welfare-queenery to a fine art, yet there are those useful idiots who worship him as a beacon of free-market capitalism.

Once again it is about control, limiting free choice, and forcing leftist ideas on others no matter how wrong-headed or distasteful they really are.

The hypocrites aren’t interested in the science, economics, or facts behind the push to eliminate oil and coal.

Yet they are the ones accusing others of being anti-science.

They can make everybody buy a Tesla and call it a tax.

Musk himself is BEGGING Congress to end the subsidies.

“Then it was oil imports: electric vehicles (EVs) would reduce foreign dependency and balance of trade deficits. Bountiful oil and natural gas supplies from America’s hydraulic fracturing revolution finally eliminated that as an argument.”

This renders the entire article worthless.

The US imports about 9 million barrels of oil every single day. EVs are worthless, but so is this guy’s statement, rendering the rest of his work meaningless.

Conservatism is never against technology. We should be against the politics of technology and government subsidies. The Tesla is a very nice car, but it should be a nice car on its own merits - not because of government rebates.

This article points out what we all know is obvious. It is, and it will remain, a niche vehicle in a niche market. It is not the magic answer to the climate fantasies that drive much of our economy thanks to government intervention and media hysteria. Anecdotally, the folks I know who have them would have likely purchased them without the rebate, $7500 is not much of a factor in that demographic.

Technology will eventually solve many of the “problems” our society seems obsessed with. Ironically, these advancements would happen quicker if the government stayed out of the market. In general, when the government gets involved today it slows the development of a more efficient and effective tomorrow. It also perpetuates the problem of corruption and crony-capitalism. Obama’s “green technology” initiatives made many of his friends and supporters very wealthy. It did very little for the rest of the country and nothing for the average American.

Horse and buggy has a range of about 15 to 20 miles and are a lot cheaper to recharge.

Musk’s companies have paid back every government loan with interest.
Taxes paid on his products & profits have exceeded tax credits given for them.
Technological advancements have been astounding (reusable rockets, 300+ mile luxury EVs, viable progress toward Mars).
And Musk himself is BEGGING Congress to end the subsidies.

“Don’t throw me in that briar patch!”

Yes, it has a small battery, and will use it when it can, but if it runs out it will switch to a gasoline engine.